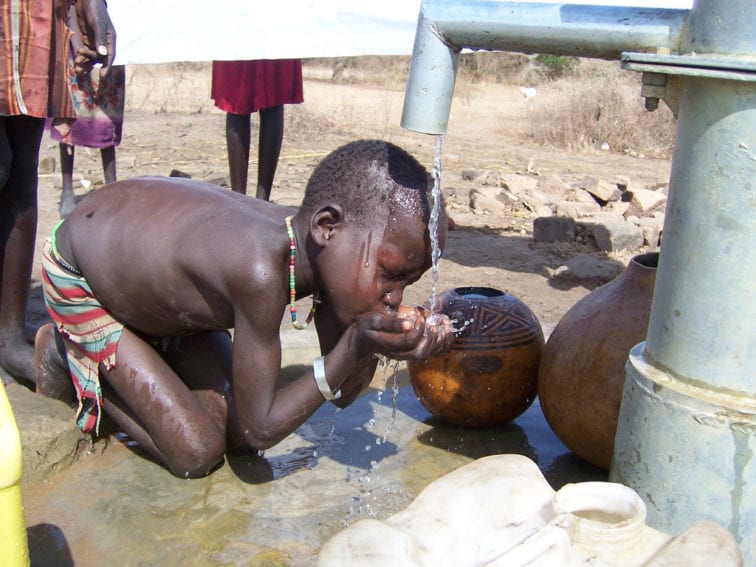 Despite decades of success at providing clean, safe water in developed countries, we have failed to ensure that people globally can benefit from one of the fundamental promises of modern society: that the water you drink will not make you sick.

But with today's technology and an emphasis on innovation, I believe we can, and should, solve this 'drinking water problem'. As the founder of Indian firm Sarvajal — which means "water for all" in Sanskrit — I have spent a lot of time thinking about how we can do this.

As a first step, we need to look at how we define success. The prevailing policy ideal for water infrastructure is based on established practice in developed countries: a piped grid that provides each household with drinkable water on tap, 24 hours a day.

The cost of such water grids is so high that many western countries cannot afford to proactively repair their own ageing infrastructure. And in developing countries, the financial resources and water availability are laughably insufficient to mimic this model.

There are many reasons to think beyond the water grid. In rapidly developing countries, roads and pipes are dug up almost daily to install or upgrade infrastructure. And in a centralised grid, treatment failure and contamination can affect everything downstream.

In addition, most water is not needed for drinking. A practical solution is to split drinking water from that supplied for other purposes. Indeed, this is precisely what wealthy households do when they install point-of-use filtration systems.

Sarvajal was founded in 2008 around this challenge of providing reliable, safe drinking water for the poor. But we had two additional challenges.

First, to find a business model that could be scaled up using commercial financing alone. We decided to sell water as a service, and to strive to prove that sales revenue could finance a way of providing clean water. Second, we kept the price below every alternative option.

We anticipated a number of serious problems. For starters, people in India are unaccustomed to paying for water and, if they do pay, it is expensive to collect cash from villages that are far apart. And even if you could get the cash, a distant company selling a locally available natural resource is simply untenable.

But people already pay for water and they know it. Access to water controls their daily schedule and creates tension between families and neighbours. And, according to our research, the cost of drinking dirty water can exceed ten per cent of a poor family's annual spending.

Among India's wealthiest quarter of households, 68 per cent filter their water. [1]. Our research shows that, at the bottom of the pyramid, that drops to just six per cent. Those who can afford a filter generally own one.

What's the solution? Instead of selling water, or transporting filtered water to communities, Sarvajal sells a service to clean local water for local consumption.

Our 'grid' is above ground: a small entrepreneur-run storefront in villages where filtered water is available in a clear and reusable 20-litre container.

The use of franchisees makes it local. Villagers don't buy from Sarvajal, they buy the service from someone they know within their community. Most of the jobs and revenue generated stay local.

This nuance is critical to success. Almost a fifth of households started buying from Sarvajal within weeks, and franchisees were making money.

But early success taught us a hard lesson on expectations: people don't go back to the water they used to drink or the way they used to drink it. Water had to be available under the conveniences we promised — with a daily and dependable service.

It is an unimaginably difficult task to keep hundreds of complex machines running in dispersed villages with unskilled operators, unreliable electricity, intermittent mobile phone service and franchisees who are likely to blame you for any failure.

Our solution was to build low-cost controls that send mobile phone text messages to a central server about everything our machines do in real time, including water quality. This helps us to predict and reduce failures.

However, there was one major disappointment. Our goal was to get water to the 'last mile' of the population, but even our small and standardised plants required a minimum village size of about 4,000 to be financially viable — and that kept us from reaching the hamlets where water was an even more acute problem.

The solution was inspired by technology that enables us to 'go to the bank' 24/7: the ATM. The result was a low-cost, solar-powered, self-contained water vending machine that keeps clean water secure and can be refilled by the nearest franchisee.

These 'water ATMs' are operated by smartcards that can be topped up just as users do to buy talk time for pre-paid mobile phones: at any local store or through a roving representative.

This device has inspired a vision where water ATMs on every corner allow villagers and city-dwellers to get safe water when they want it. We believe that our experience could inspire similar solutions around the globe.

The key to finding an answer is to reduce the problem to one you can solve, setting constraints and innovating until you make it work. Technology is an enabler, but the real wisdom is building an operation that sustains service delivery at the last mile.

Anand Shah is the founder of Sarvajal, was the founding CEO of the Piramal Foundation, a co-founder of Indicorps and a member of the Aspen Institute's inaugural India Leadership Initiative. Shah can be contacted at anand@sarvajal.com.