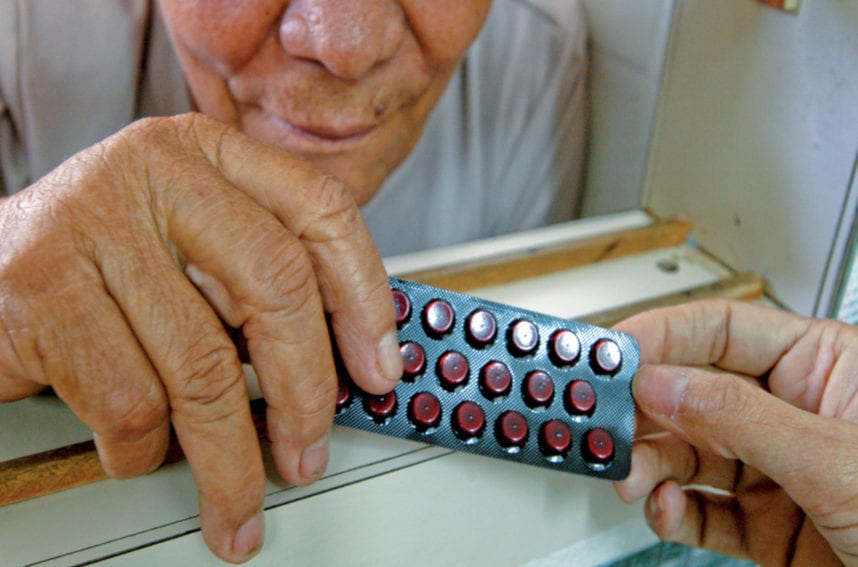 The sale of antibiotics without a prescription is a widespread practice in many Latin American countries. Copyright: Peter Ilicciev/Fiocruz. Image in public domain.

Antibiotics can be bought without a prescription at grocery stores across Guatemala, raising concerns about the growing problem of drug resistant bacteria.

Researchers from the University of the Valley of Guatemala found during their four-year study that weak enforcement of antibiotic dispensing regulations and patient demand were driving the informal sale of antibiotics.

"This demand for medicines is related to health access issues,” Purificacion Moreno, lead author of the study, tells SciDev.Net.

"To get medicine through the formal way you need medical consultation and in some places the health posts are three hours away from some houses."

The research, published in PLOS One, was carried out between 2016 and 2019 in the most densely populated areas. Almost 70 per cent of the 443 shops that were surveyed in four cities, including the capital Guatemala City, sold antibiotics.

“Anecdotally, we have been told that antibiotics are still available, and even that some stores have increased their sales due to the effect of the pandemic.”

Purificación Moreno, University of the Valley of Guatemala

The most commonly available antibiotics were amoxicillin (86 per cent), and tetracycline (66 per cent), frequently used to treat a range of bacterial infections, including respiratory, intestinal and urinary infections.

The medicines were sold by individual tablet or capsule for between 16 and 19 US cents, without important information such as expiration date, dosage advice, or the name of the manufacturing laboratory.

“In short, a product without the quality guarantee it should have,” Moreno says.

In August 2019, the Ministry of Health issued a law requiring formal establishments, such as pharmacies, to only sell antibiotics with prescriptions. But, as grocery store owners had never been legally authorised to sell drugs, the researchers believe the law did not impact their behaviour.

“Anecdotally, we have been told that antibiotics are still available, and even that some stores have increased their sales due to the effect of the pandemic," Moreno points out.

The ease of availability of antibiotics can have major health consequences, as inappropriate use contributes to the spread of antimicrobial resistance, a problem already documented in Guatemala.

But, poor antibiotic stewardship goes beyond Guatemala. “We believe it is a problem in all Latin America, but with very little objective research,” Moreno says.

Infectious diseases expert Uri Torruco, who was not involved in the study, says the unauthorised sale of medicines in Mexico has not yet been documented, but a parallel problem is the lack of training for physicians to properly prescribe antibiotics.

“They give antibiotics for diseases that do not need it; they give antibiotics to COVID-19 patients and make them waste two days to see if it worked … or abdominal pain that is thought to be diarrhoea ends up being appendicitis," Torruco tells SciDev.Net.

He says people with health concerns should seek advice from a health professional, “but if they are not trained, the problem remains the same at the end: inappropriate prescription of antibiotics.”

With some exceptions, in Latin America and the Caribbean “we all have the same problem”, says Torruco: “Very few doctors per capita.”

“It´s just a symbol of overall inequality, access to health care is offered to a limited group of people who have money to pay for it, and the general population is restricted,” he says.

“That explains why we have so much sickness and lower life expectancies than in other regions of the world.”