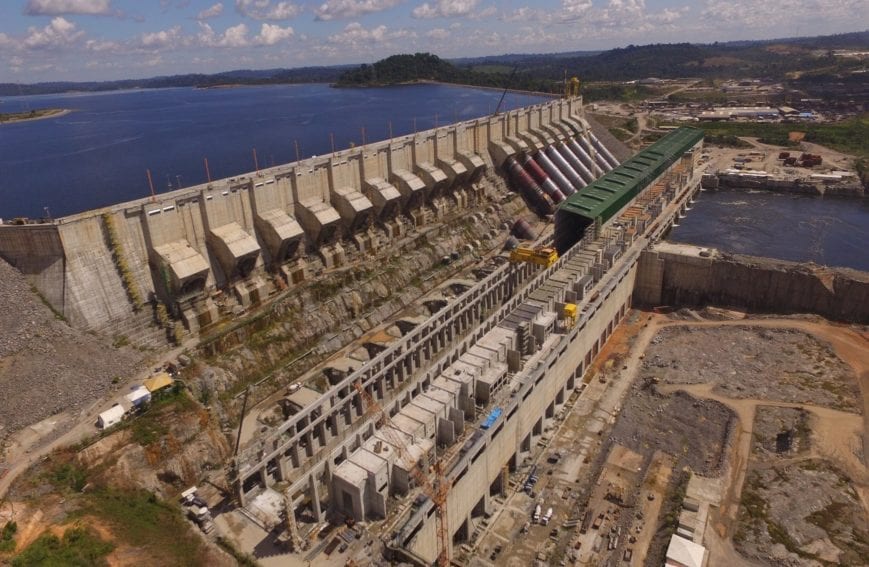 The Belo Monte hydroelectric complex is the third-largest in the world in installed capacity, able to produce 11,200 megawatts. Copyright: PAC-Ministry of Planning, Brazil [CC BY-NC-SA 2.0].

[SÃO PAULO] The promises of regional economic development pinned to the building of the Belo Monte hydroelectric complex, in northern Brazil, have failed to materialise. Instead, the population of Altamira —the mega-dam’s nearest town — grew, while nearby rural areas suffered.

These were the conclusions reached in a study published this month in the journal Land Use Policy, which analysed the social and environmental impacts of the hydroelectric project — one of the biggest infrastructure ventures on Earth.

The construction of the hydroelectric dam started in 2011 at a projected cost of R$40 billion (about US$9.5 billion). The dam is made up of two powerhouses, comprising 24 turbines capable of generating 11,200 megawatts of electricity, making it the third-largest in the world in production capacity terms, according to the Brazilian National Electric Energy Agency.

“Paradoxically, these projects in the Amazon region further increase the existing inequalities in relation to the rest of the country. So much so that the state of Pará, which hosts some of the largest hydroelectric plants in Brazil and the world, maintains one of the lowest human development rates in the entire country,”

At its inception, the Brazilian government said the dam was urgently needed if the country was to keep pace with soaring domestic energy demands resulting from a growing economy.

In the study, researchers carried out interviews and field surveys in around 400 rural households to the west of Altamira city, along the Trans-Amazonian Highway — a 5,000-kilometre road cutting across Amazon rainforest.

Miquéias Calvi, a professor at the Federal University of Pará’s forest engineering faculty and a co-author of the study, explains that proponents of the dam said it would increase demand in the city’s markets, boosting food production in nearby rural areas. But, in practice, new jobs linked to the Belo Monte project led to an exodus of rural workers to urban areas, causing knock-on problems for the region’s agricultural sector.

About 90 per cent of interviewees stated in 2015 that after the Belo Monte construction began, they observed a sharp decrease of workers in rural communities, as they migrated to the city to look for jobs. Wage costs rose as a result, they reported.

“This situation led to a labour shortage, pushing up production costs in rural areas, which affected the entire agricultural sector of the Altamira region,” said Calvi. “Rural businesses with lower financial capacity and low available family labour were the most affected.”

Researchers estimate that 60 per cent of the region’s family farmers abandoned annual crops such as rice, beans and corn, while production of cocoa and beef cattle increased between 2011 and 2014. Altamira now imports food from other Brazilian states, including fruit from São Paulo, fish from Santa Catarina and rice from Rio Grande do Sul.

María Elena López, a biochemist at the Federal University of Pará’s Institute of Biological Sciences, studies the impact of dam projects on biodiversity in Brazil. She said: “I think this trend is unlikely to be reversed, as a significant number of these migrants will not want to return to the countryside after experiencing better living conditions while working on the dam construction.”

The Belo Monte construction also caused a population boom in the Altamira region, the study found, with the population almost doubling between 2011 and 2014 from 75,000 to nearly 150,000 inhabitants.

This also appears to have had consequences on the health of the population. A study by Márcia Grisotti, an associate professor at the Santa Catarina Federal University’s department of sociology and political science, found an increase in syphilis records in pregnant women in the city of Altamira, from one case for every 1,000 children born in 2010 to 15 cases in 2015.

Violence has also increased, earning Altamira the undesirable title in 2015 of the most violent city in Brazil. According to data from the country’s Ministry of Health, there were 125 homicides per 100,000 inhabitants. Five years earlier, the rate was 61 homicides per 100,000.

Lopez noted that supporters of such megaprojects defend them based on the promise that they will spur development, especially in underdeveloped regions. But she said: “An interesting aspect is that this work presents quantitative data of employability — hiring and firing — revealing that this is not true.”

Despite an increase in job supply during the dam construction, once completed, the number of jobs in all economic sectors decreased to near pre-construction levels, she said, “demonstrating that megaprojects like this bring few new permanent jobs to the region”.

“Paradoxically, these projects in the Amazon region further increase the existing inequalities in relation to the rest of the country,” stressed Lopez. “So much so that the state of Pará, which hosts some of the largest hydroelectric plants in Brazil and the world, maintains one of the lowest human development rates in the entire country.”

The scientist believes more could have been done to mitigate the risks. “As a preventive measure, in addition to improving infrastructure in the region, it would be essential that rural and social development plans were carried out before construction started, to minimise the impact of migration.

“And after construction, environmental monitoring associated with broad access to public health services would provide the necessary support to carry out interventions in order to prevent the consequences in the medium- and long-term.”

This article was produced by SciDev.Net’s Latin America & Caribbean desk.

The study published in Land Use Policy was supported by FAPESP, a donor of SciDev.Net