[Antananarivo] Vohibola forest on Madagascar’s east coast is considered by experts to be an important natural “gene bank”. But some fear it could soon be wiped out by harmful human activity such as logging and poaching.

The site, a so-called primary forest of native tree species, is of huge environmental significance – not only for local villagers but for the whole of the East African island nation.

Biologist Achille Raselimanana of the Association Vahatra, which supports researchers and conservationists specialising in Madagascar’s abundant biodiversity, told SciDev.Net: “Like all the other forests along this coastline, it is home to species never found anywhere else, such as Brookesia minima, the world’s smallest chameleon.”

“Forests such as Vohibola are veritable living laboratories where genes we risk losing are preserved. They are like banks that keep riches safe for future generations.”

Raselimanana, a lecturer and researcher at Madagascar’s University of Antananarivo, is the co-author of a three-volume scientific textbook on the 98 terrestrial protected areas of Madagascar, officially launched 1 March.

What little is left is falling prey to local wood smugglers who, according to several sources, are protected by authorities on the ground. 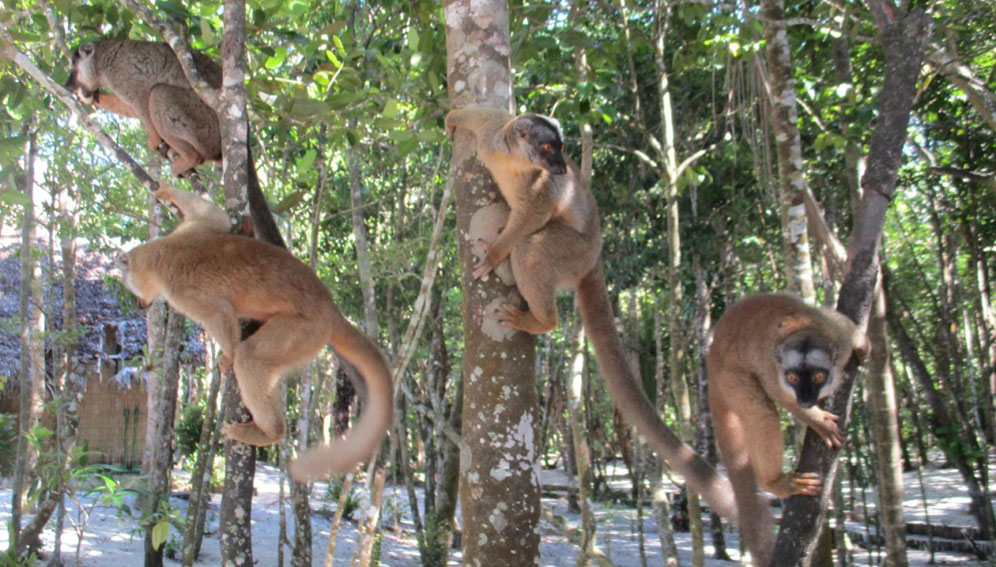 Lemurs in the Vohibola forest are at risk from poaching and changes to their natural habitat. Image credit: SciDev.Net / Rivonala Razafison.

Cyrille Nabé is a respected forest ranger from the Indian Ocean fishing village of Andranokoditra, one of four villages on the edge of the forest.
For the last 20 years, he has learned much from his regular contact with researchers visiting Vohibola, and can effortlessly recite the scientific names of the animal and plant species harboured by this humid forest.
It is home to, among others, seven species of lemurs, at least 30 species of frog – including the world’s smallest, Stumpffia vohibolensis – and 13 species of chameleon.
Some 150 varieties of trees have also been identified, seven of which are endemic local species. But according to Nabé, the site has never been the subject of a full biological inventory.
Highlighting the sacred nature of the Vohibola forest for the local population, he points to a flowering tree, Humbertiodendron, which has never been identified elsewhere. He is pessimistic about the future of the trees, despite their location being a closely guarded secret.

“There are only four specimens in our forest. As they are rare, they are safe for the time being. But I doubt they will be for long,” he says.

The fact that such species can only be found in Vohibola is highly significant from a scientific perspective, according to Raselimanana.

“Its presence on this site gives it a particular value in terms of protecting biodiversity,” he explains.
According to Raselimanana, international trade in animals and wild plants could be beneficial if the rules of the Convention on International Trade in Endangered Species of Wild Fauna and Flora (CITES) were respected.
Jonah Ratsimbazafy, a leading primatologist who chairs the Study and Research Group on Primates of Madagascar (GERP), broadly shares this view. But he stresses: “In addition to their various ecological functions, forests such as Vohibola are veritable living laboratories where genes we risk losing are preserved. They are like banks that keep riches safe for future generations.”
Rakoto, a 31-year-old traditional fisherman who is one of the team of volunteer rangers led by Nabé, hopes to be able to benefit from the sustainability of the forest in the future, as fishing is in decline.
“The daily catch used to amount to between 60 and 80 kilograms,” he told SciDev.Net. “We just needed to spend two hours at sea to get these amounts. But that’s no longer the case. Even the most skilled fisher struggles to bring back two kilos of fish after more than four hours sailing the seas. Others come home with empty traps.”
Like Issoufa, another ranger who lives in the neighbouring fishing village of Tampina, he is becoming aware of shifts in the marine ecosystem linked to global warming and of the vital role the forest plays in helping to address them.

But the Vohibola forest’s days are numbered. Optimists believe it can survive for another five years. Others expect the forest cover to disappear any day now, as its destruction gathers pace.
Justin – who is in his eighties and the oldest inhabitant of Andranokoditra – and Issoufa, are concerned that the forest cover could be lost by the end of this year if no action is taken to end the damage being done.
During a visit to the forest last month SciDev.Net witnessed the havoc wrought by human activity.
Just under 1,000 illegal woodcutters and charcoal burners have this year started working in parts of the Vohibola forest that had previously remained unspoiled, on the banks of the 485-kilometres-long Pangalanes canal.


According to local sources, most of the smugglers, all of whom are unemployed, come from the country’s economic capital Toamasina, 60 kilometres north of the site.
In what is the principal port of the ‘Big Island’, as Madagascar is known, demand for forest products is constantly increasing.

Operating night and day, poachers entering the forest to hunt lemurs and other animals are terrorising local communities and pose a risk to the survival of the rich biodiversity of nearby areas.
To stem this environmental catastrophe, regular high-level meetings have been held since March 26 – when Valéry Ramonjavelo, general secretary of the presidency of the Republic of Madagascar, asked the minister of the environment and sustainable development to open an inquiry.
Madagascar’s regional director of environment was sacked last month after a ship thought to contain bags of wood and charcoal from the forest apparently received authorisation from government officials.
Vohibola is not recognised as a protected area, and an attempt in 1998 to seek such a status was unsuccessful.
Management of the forest has been temporarily passed to the Razan’ny Vohibola association, pending the results of the inquiry.

This piece was produced by SciDev.Net’s Sub-Saharan Africa French desk.