Do no harm: A code to guide use of humanitarian drones 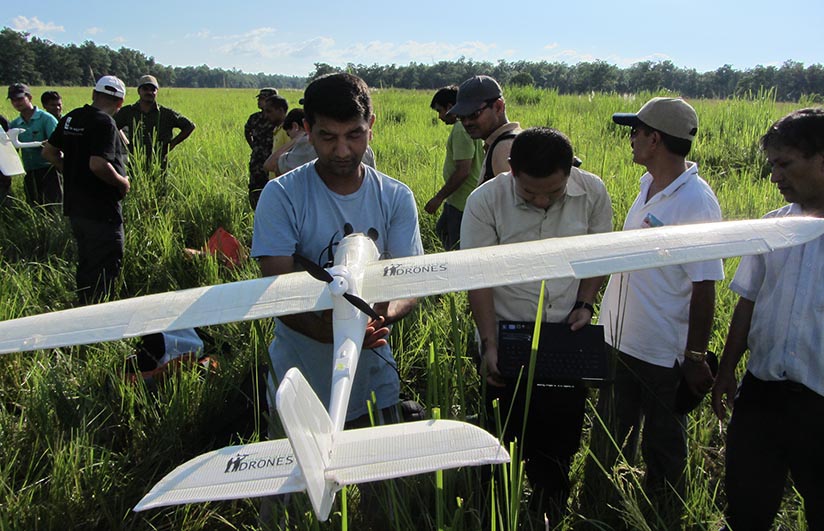 [SINGAPORE] Joel Kaiser arrived in Nepal just after the deadliest disaster to hit the Himalayan country. It was late in April 2015; two major earthquakes had killed nearly 9,000 people and injured close to 17,000 more. Kaiser, a seasoned humanitarian and emergency response specialist, was trying to figure out how to get emergency supplies to villagers in a tiny hamlet high up in the mountains.

“There was only one road, and it was very steep on either side,” recalls Kaiser from WeRobotics, a not-for-profit organisation dedicated to providing humanitarian aid, social development, and environmental protection through the use of robotics. Relief distribution had to be done on that road, and the team was thinking ahead to the risks in case large crowds showed up. “So we wanted to make a map of the village just in case we had some sort of security problem.”

To make the map, Kaiser and his team from AidRobotics — a WeRobotics’ programme that focuses on disaster response — would use a small drone they had brought with them to Nepal. They needed roughly 20 minutes to fly the drone over the village to snap some pictures. But first, they needed the mayor’s permission.

It’s important to reach out to the local community before flying unmanned aerial vehicles (UAVs) overhead, says Kaiser, even when time is of the essence.

Engaging the community is one guiding principle, along with 14 others, that form the Humanitarian UAV Code of Conduct — a set of guidelines established in 2014 that “informs the safe, responsible, and effective use” of drones in humanitarian settings.

The past five years have seen humanitarian organisations increasingly embrace UAV usage in their work. Because they are small, lightweight and can be remotely operated, drones have many useful applications. Most often, they are used to map out disaster-affected areas, providing aerial images that are much more detailed than those taken by satellites. Drones are also deployed to help with search and rescue efforts, for monitoring and surveillance, and to deliver food, medical supplies, and other small cargo.

“Because laws in many countries around drones are uncertain or unstable, it’s still really unclear where drones used for emergency response purposes legally stand — how that pertains to property rights, licensing, and so on,”

In late 2015, a survey of close to 200 humanitarian aid workers found that 60 per cent believed drones could help their work. However, 86 per cent felt clearer guidelines and rules were needed.

A code is born

A couple of years earlier, Patrick Meier found himself sharing the same sentiment. It was November 2013 and Meier, WeRobotics’ co-founder and an expert in humanitarian technologies, was in the Philippines aiding the UN relief effort following Typhoon Haiyan.

There, he encountered an unprecedented scenario. “In no other disaster beforehand had there been any drone team that I had come across, let alone half a dozen in the space of a week,” recalls Meier.

“But I soon realised that the teams weren’t quite sure how to share imagery with governments, let alone humanitarians and the local community,” he says. Wanting to help, Meier spent an evening Google-searching codes of conduct and best practices for drone use following a disaster. “Much to my alarm, I didn’t find anything. And I was very concerned because clearly this wasn’t just going to be a one-off,” says Meier.

When he got back home, he founded the Humanitarian UAViators Network as a platform to discuss best practices in the field — and drafting a code of conduct was the first order of business.

The code was officially launched in March 2014, and its website went live after a workshop Meier organised at the Rockefeller Foundation's Bellagio Center in Italy. Since then, it has been revised several times following consultation with humanitarian organisations such as the American Red Cross, Doctors Without Borders (MSF-Medicins Sans Frontières), and the World Bank.

Among its recommendations, the code calls for drone operators to respect universal humanitarian principles such as impartiality, to prioritise safety above all else, to be sensitive to conflict, and to collect, use and store data responsibly. It also emphasises building trust with local communities by taking the time to explain projects and share flight plans with them.

“I think a standardised code of conduct is absolutely essential because without one, basically anyone with a drone could call themselves a disaster responder, and that’s really dangerous and problematic,” says Faine Greenwood from the Harvard Humanitarian Initiative, where she studies the use of UAVs and satellites in humanitarian situations.

Greenwood cites past incidences where well-meaning but untrained drone operators failed to coordinate with flight controllers, making it difficult for manned aircraft to fly. In some cases people on the ground were angered or frightened because they weren’t informed of what was going on beforehand.

Earlier this month, Amrita Lal, WeRobotics’ Pacific Flying Labs coordinator, was working with the Red Cross in Fiji to help survey damage to houses following Cyclone Keni. She avoided taking aerial shots of one village in particular because it was close to the airport and photographing it “needed special permission from the airmen, and there just wasn’t time to get it”. The code is never far from her mind when she works. “[It] makes sure that people are not doing whatever they want,” Lal says.

Uttam Pudasaini saw this disregard for flying over restricted areas first hand. In the weeks following the 2015 earthquakes, Pudasaini, the coordinator of WeRobotics’ Nepal Flying Lab, witnessed how operators would fly their drones over the capital’s seven World Heritage Sites without government permission.

What he would like to see, however, is the code becoming better integrated with country-level regulations.

“That is the number one challenge,” agrees Harvard’s Greenwood. “Because laws in many countries around drones are uncertain or unstable, it’s still really unclear where drones used for emergency response purposes legally stand — how that pertains to property rights, licensing, and so on.”

Another pressing concern at the forefront of practitioners’ minds is data protection. Incorporated into the code in 2015, privacy guidelines currently recommend things like collecting informed consent where possible, having a data management plan, and using blurring and other technologies to protect those photographed.

But there’s room to do more. “There’s a whole range of things to consider,” says Sanjana Hattotuwa, special advisor to the ICT4Peace Foundation — things like what imagery is being gathered, how it is used, who has access to it, how it is retained and for how long, he says.

Meier, the code’s creator, is acutely aware of data privacy and protection issues. He’s made the topic a priority for next month’s meeting in Boston, where experts will gather to discuss how to update the code. “Let’s not wait for our Facebook moment,” he says.

The next “big frontier” for the code is how to use drones in conflict environments, says Greenwood. “Humanitarian law is really unclear on the context of telling small drones apart from one another in the air,” she explains. “This means you could have situations where a humanitarian, a reporter or a member of ISIS are all flying identical consumer drones.”

Something else that needs to be worked into future versions is how to use machine learning and artificial intelligence (AI) to process the large amount of data that’s collected with drones.

There’s a certain inevitability to seeing more drones being used in humanitarian work as drone technology, both hardware and software, evolves in the coming years, says Kaiser. He hopes that more information means better decision-making and more lives saved. And he hopes that “one day drones will become a go-to solution for a lot of humanitarian decision-makers”.

This article was supported by The Rockefeller Foundation Bellagio Center. For nearly 60 years the Bellagio Center has supported individuals working to improve the lives of poor and vulnerable people globally through its conference and residency programs, and has served as a catalyst for transformative ideas, initiatives, and collaborations.

From November 5 – December 3, 2018, the Bellagio Center will host a special thematic residency on Science for Development, with a cohort of up to 15 scholars, practitioners, and artists whose work is advancing, informing, communicating, or is inspired by the use or design of science and technology to address social and environmental challenges around the world.