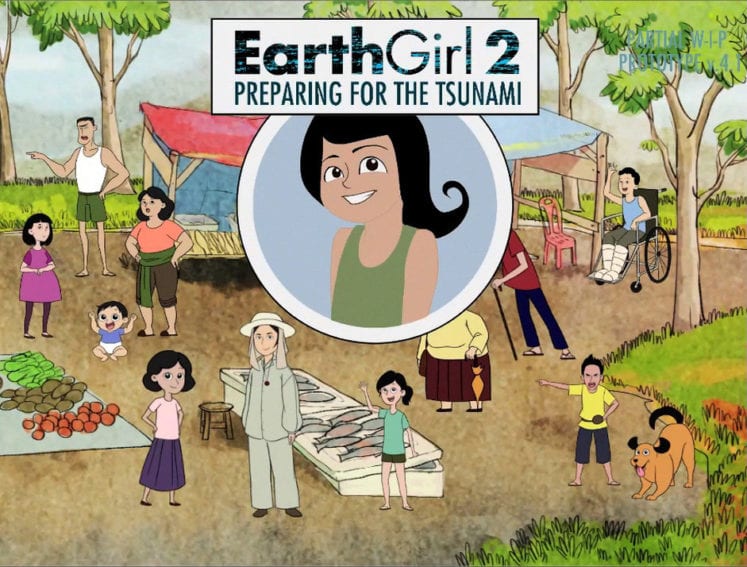 Copyright: Courtesy of Isaac Kerlow and The Earth Observatory of Singapore

[SALVADOR] I don’t exactly love videogames, but yesterday I found myself eager to play one at a conference where I was supposed to be acting like a responsible, grown-up journalist. I just couldn’t help myself: the game was so inviting and surprising.

A team of artists in Singapore have developed the game to simultaneously entertain children and show them how knowledge could keep them alive during a tsunami.

The idea started at the Earth Observatory of Singapore (EOS), where Isaac Kerlow, a Mexican artist who has lived there for the past ten years, was invited to create innovative projects to amplify the mission of EOS and help reach more people.

“I wanted to make a game to teach kids about earth hazards, to show them the mechanics and science [behind] them but I also wanted to do a fun game so 8-10 year old children would play it and learn from it,” Kerlow told me, just after his presentation yesterday at the 13th PCST conference, in Salvador, Brazil.

Around 70 per cent of the victims of the 2004 Indian Ocean’s Tsunami were either girls or women. A lot of them lived in coastal areas or places that are prompt to flooding and tsunamis. So Kerlow’s game features a girl as it protagonist.

The game, called Earth Girl 2, shows a girl in different dangerous scenarios and asks players to make choices: a tsunami is approaching, what tool or equipment would you choose to escape it and how much would you pay for it from your civil defence budget?

“From a wide range of options children finally discover that knowledge is the least expensive tool which would help them survive,” said Kerlow.

There are a lot of games that seek to teach science in the guise of a game but Kerlow says it’s tricky to maintain a believable story and teach didactically at the same time.

“If you want to do a game that is engaging and that has its own rules, you can only do that,” he said. To try and lecture at the same time would be “a mistaken approach”.

Instead, Kerlow and his team are weaving as much scientific information into the fabric of their game world as they can, so the more you play, the more you know about how hazards happen and how to avoid them.

“We are creating a new type of game, which provides a lot of information. If you play it, you can learn. But I didn’t lecture you. You learn through your experience.”

Kerlow has already made the versions of the game dealing with floods and earthquakes, as well as tsunamis. For him, developing countries have big potential to create new ways to communicate science and prevent natural disasters.

“I really don’t think it matters if you are in New York, Berlin, Caracas or Veracruz. As long as you have basic knowledge and access to simple technology, you can make it.”

Kerlow showed us a prototype of Earth Girl 2, which will probably be ready in five months to be used on tablets and smartphones.

The last time I played computer games it was Super Mario Brothers. But who knows? Perhaps Earth Girl 2 will be the title that gets me back into gaming.

See below for a video about EarthGirl 2: