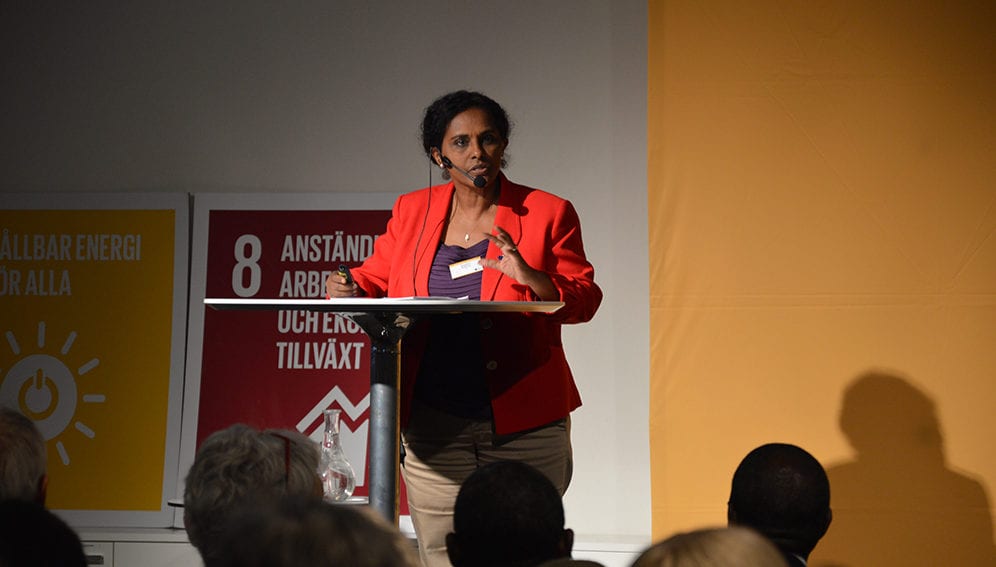 Segenet Kelemu, the director general of the International Centre of Insect Physiology and Ecology (icipe). Copyright: Photo supplied by Sida

By: Ben Deighton and Bothina Osama

[STOCKHOLM] There is an African saying that it takes a village to raise a child. But according to Segenet Kelemu, the director general of the International Centre of Insect Physiology and Ecology (icipe) in Nairobi, Kenya, it takes a global village to create a successful scientist.

Kelemu, who was nominated by Microsoft founder Bill Gates as one of the “heroes … (who) inspire me” and who won the L’Oréal-UNESCO award for Women in Science in 2014, said that support and networks had been crucial to her success.

In an interview with SciDev.Net on the sidelines of Sida Science Days in Stockholm, Sweden, on 21 May, she described her journey from rural Ethiopia – where she had to run to school barefoot after collecting firewood – to a position as the head of one of the world’s leading agricultural research centres.

Would you like to start at the very beginning?

So, I grew up in a small village in Ethiopia where there was really no sign of civilisation, no running water, no electricity. It was a farming village where girls are married off at a very early age through arranged marriage, but I was not really a marriageable person because I was very rebellious and very tomboyish.

That was my protection and freedom, I think my parents were forced to send me to school. I went to school after doing a lot of farm work and collecting firewood and walking a distance to fetch water and all this, and then I had to run to school barefoot. Luckily, I was very good at school, so I think the teachers were very supportive and I wasn’t punished for all the rebellious things I had done.

I think what really drove me to science was the surroundings, the struggle that we had in farming. The pests came and wiped out our crops, the locusts and the armyworm and all kinds of things, so it was a battle constantly. I actually found out you can do science on those things [agriculture and pest control] from my biology teachers.

When you started at agricultural college did you have a specific dream?

Had I dreamt of being where I am today? No, because I wouldn’t ever have imagined it. What I was clear about was that whatever I did I had to do it better than everybody else. In school also I always said that I would rather be last than second. So, when I went to college there were very few women in agriculture – I think there were five out of a hundred and something [students] – so I graduated on top of my class. The university where I graduated always hired the top five, kept them there as assistant lecturers first, then they sent them to graduate school with the assumption that they would come back and be on the faculty.

How did you balance your time between your research work and having a family?

It is always hard to manage. You want to really do excellent work, you want to be a good mother, a good wife, a good everything, so it is difficult. But we were fortunate, we had a nanny, we had a housekeeper. I had women supporting me at home to do these things. The institution was also very supportive, they allowed me to take my daughter to work every day.

So the institution, the International Center for Tropical Agriculture (CIAT), was helpful?

They really were extremely supportive. They understood and they valued my contribution to the organisation, so they wanted me to be happy, to be able to balance a family and a professional life. So that is really important – to have a supportive organisation.

The story of my success is – I think – a network of people and partners that supported me all the way. [They were] international partners, international students who worked in my lab, who took my ideas and guidance, who transformed that and contributed to the science, to the publications, to the labs, grew the programmes … the donors that supported my research, the research partners globally. There is an African saying – it takes a village to raise a child. It is true in my case also, but it takes a global village to make someone successful in science.

As a female leader, were there challenges for you?

Yes, absolutely. When I started in Colombia I had a challenge because this was the first time the team had a black woman as a boss so it was difficult for some of them. Some of them were really challenging my authority. And so – I was also young at that time – I had to make a decision to fire some of these people because I was not going to be [someone who tolerated it, considering] where I come from, where I am today, and just have some idiot ruin it for me. Insubordination should not be acceptable anywhere. You can challenge my ideas, but you can’t challenge my authority.

How have those lessons impacted on your role at icipe?

When I was selected it was funny because the staff were not involved in the selection. The board did that, and the shortlisted candidates were interviewed in Zurich in a hotel meeting room. After they made their decision and I had accepted the position I was invited to icipe to be introduced to the staff by my predecessor and board member. So [we were in] this huge hall – it was full and people were standing outside as well. There was my predecessor, he was a very tall German guy, and here I was halfway [compared to his height] and the board member was also [very tall].

I was told a year into the job the staff were so depressed afterwards. It was like, ”Oh my god, they have brought in this tiny African woman, she is going to crash it. There is no way she is going to manage this complex centre”. Last year I told them at a staff meeting, “By the way, I know you guys, what you had said, that I was this tiny woman [who] was going to crash it.” I said, “Lesson number one, never underestimate a woman, especially an African woman.” Everybody clapped.

This interview has been edited for clarity and brevity.