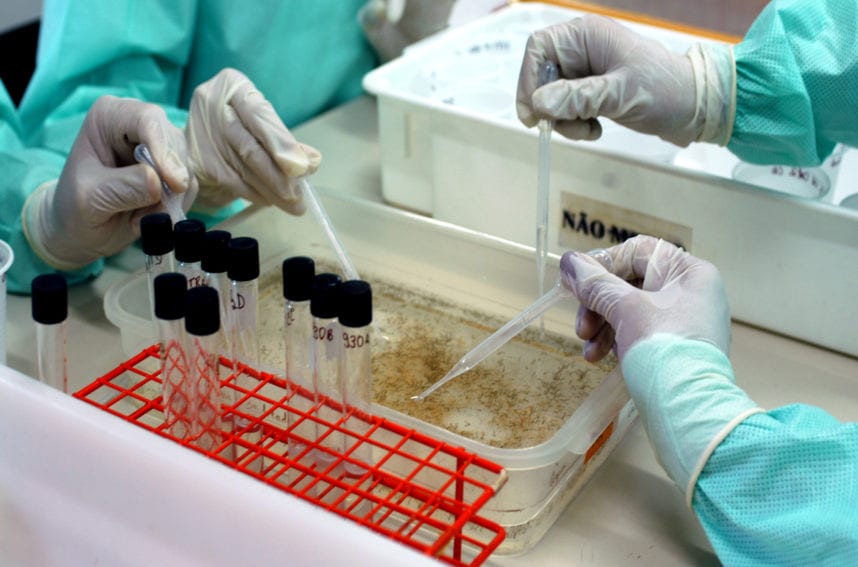 A new blood test for Zika that can detect the virus within a few hours, even in patients who have had other mosquito-borne diseases, has been approved for production and use by health services in Brazil.

Brazilian scientists developed the kit following the 2015 Zika outbreak that caused a higher rate of microcephaly, a condition where a baby is born with an abnormally small head. Almost 3,800 cases of microcephaly were recorded among newborns in Brazil that year, compared to an average of fewer than 200 in previous years.

The new tool can detect the virus in infected patients in less than four hours, compared with between 15 and 30 days using current methods.

“Rapid testing like this can deliver results more simply and quickly without the need of large analytical equipment and highly qualified personnel,”

It works even in people who have suffered from dengue, yellow fever and chikungunya; since Aedes aegyptis is the main vector for all these diseases, it is common for laboratory tests not to be able to differentiate between them. The body's immune responses to the Zika and dengue viruses are so similar that, until now, it has been difficult to tell a recent Zika infection from a historical dengue infection.

According to virologist Edison Luiz Durigon, professor at the Institute of Biomedical Sciences of the University of São Paulo and leader of the team that developed the kit, the test is “between 92 and 100 per cent accurate”.

“We developed reagents that don’t give any cross result with other diseases and keeps its high precision. The serological [bodily fluid] tests that already existed were developed by multinationals and had been tested in areas that were not endemic to dengue, giving cross results,” he told SciDev.Net.

The research received US$300,000 in funding from the São Paulo Research Foundation (FAPESP), a publicly funded body whose stated mission is to support science “in all fields of knowledge”.

The clinical tests were carried out on 3,500 women mainly from areas where Zika is endemic. The kit has been approved by the Brazilian Health Regulatory Agency (Anvisa) and will be produced by local company AdvaGen Biotech based in the city of Itu. It will be sold at no more than US$10, according to Durigon.

“The whole process of developing the kit took around two years until we received Anvisa’s approval. We wanted to make it a low-cost test in a format that most labs could use,” stressed Durigon.

The endemic areas would be a priority for the distribution of kits, particularly in the northeastern part of the country where most of the infections are concentrated.

Scientists are engaging with public health authorities, which will open a tendering process to distribute the kit to the National Health System.  They are also advocating for it to be included among the routine prenatal tests required of pregnant women.

Apart from microcephaly, babies that have been exposed to the Zika virus may develop brain lesions that are initially undetectable but could trigger cognitive impairment.

“That’s why we should make a continuous follow-up during pregnancy to detect if they have been exposed to the virus even if they don’t have symptoms,” argued Durigon.

Authorities in Colombia and Mexico have already approached Brazilian researchers with a view to implementing the kit in these countries.

“For us it’s an important landmark,” added Durigon. “This is the first time that one of our tests has had a large reach beyond academia. We’ll be able to prevent future cases of microcephaly or congenital syndromes.”

Valtencir Zucolotto, from the Nanomedicine and Nanotoxicology Group at the Institute of Physics of São Carlos, said such kits would benefit the diagnosis of infectious diseases more broadly, increasing the likelihood of successful treatment.

“Rapid testing like this can deliver results more simply and quickly without the need of large analytical equipment and highly qualified personnel,” he told SciDev.Net.

Zucolotto and his team are also working on developing a biosensor that can indicate the presence of either genetic material or antibodies from Zika or dengue in the blood. They are using the electrochemical biosensor to identify genetic material through electrodes or disposable chips. The technology is currently undergoing laboratory tests.

Meanwhile, Durigon and a team from the Butantan Institute, São Paulo, have started to develop an inactive vaccine for Zika which would be safe for pregnant women. The biological research centre supplies the Brazilian public health system with 90 per cent of its antivenom and 65 per cent of all vaccines distributed in the country.

This article was originally produced by SciDev.Net’s Latin America and Caribbean desk.

The study was funded by FAPESP, a donor of SciDev.Net.