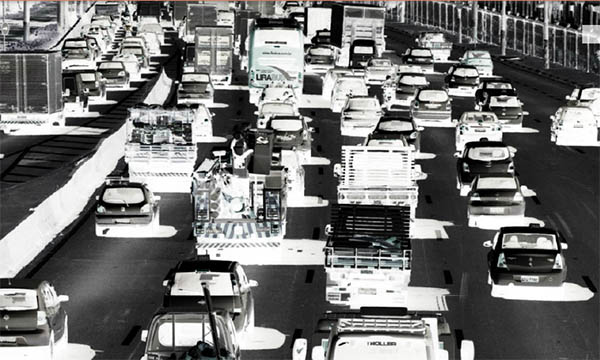 [SAO PAULO] Using ethanol instead of gasoline as a car fuel can reduce emissions of ultrafine particles by a third, which benefits human health and the environment, according to a new study.

The research, carried out in Sao Paulo, Brazil, found that environmental concentrations of particles with a diameter of 7-100 nanometers (nm) increase by 30 per cent when higher prices of ethanol forces drivers of dual-fuel (or flexible-fuel) vehicles to fill up with gasoline rather than biofuel.

“What these compounds are exactly and how they affect health are questions that require further research.”

Currently, concentrations of ultrafine particles in outdoor air are not monitored or regulated, in Brazil or in any other country.

“Between 75 per cent and 80 per cent of the mass of the nanoparticles we measured in this study corresponds to organic compounds emitted by motor vehicles — that’s to say, carbon in different chemical forms,” said Paulo Artaxo, professor at the University of São Paulo’s Physics Institute (IF-USP) and a co-author of the study. “What these compounds are exactly and how they affect health are questions that require further research.”

Artaxo explained that the nanoparticles are so tiny that they behave like gas molecules. When inhaled, they can penetrate the respiratory system’s defensive barriers and reach deep in the lung. So they can enter the bloodstream “and may increase the incidence of respiratory and cardiovascular problems”, he said.

The study, supported by Brazil’s research foundation FAPESP and published in the journal Nature Communications, is the first to be carried out outside a laboratory. It used an econometric technique, which in this case was applied to analyse the chemistry of atmospheric nanoparticles.

“This tool can work with a large number of variables, such as the presence or absence of rainfall, wind direction, traffic intensity, and levels of ozone, carbon monoxide and other pollutants,” Artaxo added.

The team worked at the rooftop of a ten-story building that belongs to Brazil’s Institute of Physics (IF-USP) in the western part of São Paulo City — a site relatively distant from main traffic thoroughfares which means the aerosols measured there are ‘older’: they have already interacted with other substances present in the atmosphere.

The researchers collected data on aerosols in the atmosphere, meteorological conditions, traffic and reasons behind the consumers’ behaviour of switching from ethanol to gasoline. The measurements were made between January and May 2011, when ethanol prices fluctuated sharply compared with gasoline prices.

The fluctuations were due to macroeconomic factors such as variations in the international price of sugar. Brazilian ethanol is made from sugarcane.

For Artaxo, the results “reinforce the need for public policies to encourage the use of biofuels, as they clearly show that the public lose in health what they save at the pump when opting for gasoline.”

“By incentivizing biofuels, we could solve several problems at once: we could combat climate change, reduce harm to health and foster advances in automotive technology by offering a stimulus for auto makers to develop more economical and efficient cars fuelled by ethanol,” he concluded.

Sao Paulo is the second largest Brazilian city, with 7 million vehicles on the roads and the largest urban fleet in the country of flexible-fuel cars that can use ethanol or gasoline interchangeably.

Taken from a newsletter by FAPESP, a SciDev.Net donor, and edited by SciDev.Net’s Latin America and the Caribbean desk.