[KOLKATA] To a farmer in India, ‘science’ might seem a meaningless concept. But put it into a rural context — nutrition, seed conservation, climate change — and it begins to seem very relevant indeed. It’s precisely this approach that the Indian government has adopted in its countrywide push for scientific awareness — an ambitious programme receiving plaudits and criticisms in equal measure.

Now several months old, the 2004 Year of Scientific Awareness (YSA) initiative aims to spread the word about science "much faster, much farther, and much wider" than ever before, according to India’s National Council for Science and Technology Communication. The programme is using methods ranging from village rallies to a science exhibition housed on a train to get the message out to the Indian public.

The Department of Science and Technology (DST) contends that nurturing a "scientific temperament" is essential for the country’s development. V. B. Kamble, acting director of Vigyan Prasar — the DST’s science communication wing — said in a recent interview in Frontline magazine that this process of creating awareness goes beyond popularising science. What is important, he said, is inculcating a scientific mindset so that people are able to think logically and rationally.

"Unless we are able to think in a rational manner it becomes difficult to look at problems in such a way as to arrive at logical solutions," Kamble asserts. "Scientific method has to be emphasised along with scientific awareness."

The YSA is not the first time India has opted for science education on a grand scale. The government’s science awareness initiatives began back in 1982, and gained momentum during its jathas — marches or rallies incorporating local forms of folk theatre — of 1987 and 1992. Both rallies reached a wide cross-section of people, and were hailed as success stories. The All-India People’s Science Network, a coalition of popular science organisations, arose in the wake of the first, while the second led to a real improvement in literacy levels.

This year’s YSA programme also harnesses the jatha format, but its scope is wider and it includes other activities that make it accessible to a wider range of people. For instance, the Vigyan Rail Science Exhibition on Wheels train — a mobile show on India’s scientific and technological achievements — has been a popular success with the vast numbers of people who live near the country’s extensive rail network, and even drawn attention from Brazil, France and other countries eager to adapt the idea.

And that’s not all that is new about this initiative. According to Madhu Phull of the YSA’s national organising committee, the organisers have also used lessons from past efforts to progress beyond them. Involving the panchayats [elected local governing bodies] was seen by the government as a crucial move, as they look after the people’s interests at every level from village to district council.

"Earlier we didn’t involve the panchayats, targeting the entire population," says Phull. "[This time] we have prepared packages and training materials in eight or nine languages so that it’s easy to communicate to rural people."

Another innovation is the YSA’s focus on formulating broad ‘need-based’ programmes. So instead of devising programmes for individual states or provinces, the organisers have divided the country up into eight broad regions, based on common characteristics and shared problems: Eastern Coastal Region, Western Coastal Region, Eastern Himalayan Region, Western Himalayan Region, Arid Zone Region, North-Central Region, South-Central Region and Central Region. Over and above these, some of the themes explored are common to the country as a whole.

Coordinators have been appointed for the regions, and also in states within the regions, to help kick-start the programme at that level.

A. K. Ghosh of the Centre for Environment and Development, a non-governmental organisation, is also head of West Bengal’s coordinating committee. He feels the YSA’s bottom-up, decentralised, approach ensures accountability.

"The themes, too, are interlinked to development and the well-being of the people," says Ghosh. "We found during the training programme of the panchayat members that they were receptive to ideas like eliminating superstitions which abound in rural areas."

Ghosh also points out that since local needs determine the themes explored, people are finding them more useful. "For the first time we’re talking about indigenous seed banks, vegetable plots emphasizing nutrition and locally available varieties, and coping with natural disasters," he says. "Many of these are chronic problems but people don’t know how to tackle them. While giving them technical support we also make sure that is acceptable to them."

Impressive as all this sounds, some have misgivings about the programme’s reach in rural areas beset by superstition and religious bigotry.

Prabir Ghosh, general secretary of the Science and Rationalist Association of India, says, "The people at the helm of these programmes in rural Bengal are the ones who indulge in regressive practices. It’s doubtful whether they’ll bring in any change." He cites, for instance, how a man was ostracised for not performing religious rites (shraddha) after his father’s death, alleging that the local panchayat abetted the campaign against him.

Another problem is a lack of proper infrastructure to implement the YSA’s ideas, which could leave locals doubting its usefulness. A case in point is a YSA programme in the Kolkata area that advised people with snakebite to go to doctors rather than charlatans. Recently, a heavily pregnant woman died of snakebite despite visiting two health centres — because the first had no doctor in attendance, and the second had no serum.

Rumbles of disagreement are also being heard from the scientific community. The YSA’s stated objective is for all "self-respecting citizens" in India to become scientifically literate. But, says Gauhar Raza of the National Institute of Science, Technology and Development Studies (NISTADS), "I disagree completely that rural people are all science-illiterate and that they need "educating’".

This view, says Raza, is a "deficit model" based on the belief that something is lacking — in this case, the knowledge and ability of rural people. In fact, it is frequently the rural farmer who’s the expert in grassroots science, and highly knowledgeable about the efficacy of certain crops, seasonal rotations and the like.

Raza, who was closely associated with the government’s jatha of 1987, says a successful example of public science education in India was the 1995 solar eclipse. "Even the official media mouthpieces All India Radio and Doordarshan warned people to keep indoors in the 1980s. There was total curfew, even in the cities. It was a turning point [in 1995] when people came out to view the eclipse under supervision."

With extensive grassroots experience, Raza feels a campaign like the YSA has to be "sensitive to cultural thought processes", as otherwise it will have little lasting effect.

Fellow scientist P.V.S. Kumar has stronger views: "It’s more propaganda than a real attempt to change perceptions." He adds, "The YSA uses a ‘transmitter model’ that assumes there’s a repository of information and what you require is a channel to pass on information. It doesn’t work like that."

Raza agrees. "We conducted surveys among rural people. They have an absorptive capacity to relate to anything that has relevance to their daily life. But when you talk about galaxies to them, and not lightning, there’s a problem. It’s basically a cultural distance between daily life and the piece of information," he says, adding, "This distance varies and depends on factors internal and external to science. YSA hasn’t taken this into account in designing the structure, though as a project it has its own merits."

How, then, would he frame a science awareness programme? "For a long time we thought of a standard science model, but it has been rejected," he says. "Science communication is a cultural process — it has to be seen as a movement. For that you can plan a host of activities … I say, let a thousand flowers bloom."

He also underlines the vital importance of checks on progress. "The weakness of the science movement, including the government endeavour, is that its impact has never been assessed with a scientifically designed impact assessment structure." Raza suggests two-year assessments, and that funding for them should be factored into overall costs.

But Dinesh K. Abrol, also of NISTADS and the People’s Science Movement in Himachal Pradesh, feels that evaluation can be difficult. "A more important thing is to be aware of the weaknesses, not a lack of evaluation, which can be done even by outside institutions," he says. "But there is a tremendous inertia within the system. One of the big problems today is that science is alienated from the problems of the poor."

"The poor still don’t have access to research organisations," notes Abrol "Our programme, ‘Meet the Scientists’, is a move in that direction. We want not only the ‘lab to land’ model but also a ‘land to lab’ sort of interaction. The YSA has many of these elements."

Stoking the fires of interest

Other scientists echo concerns about science itself. Aparna Basu, a fellow of the Institute of Genomics and Integrative Biology in New Delhi, asks, "What about awareness among the scientists themselves? Lots of them say something, but practise something else. Also, the teaching standard in schools is very theoretical."

Asok N. Basu (no relation), vice-chancellor of Jadavpur University in Kolkata, said as much at the National Science Seminar held in Kolkata in October. "We teachers don’t encourage students to ask questions," he admitted.

This point was borne out by the seminar itself. Much of the young science talent there — bright students all — could not answer basic questions from the panel. Their performance raises the worry that despite the country’s network of science clubs and dissemination of information kits, real scientific awareness has a long way to go, and suffers from a lack of originality of thought.

J. V. Mani, director of a school in Tirunelveli, Tamil Nadu, says part of the problem is India’s appalling shortage of good science teachers. "Everybody wants to become an engineer or doctor, and teaching is the last choice. The urge to ask questions is the first step towards a scientific temperament." But he thinks the YSA is a good idea. "If at least some exposed to the campaign become more science-literate its effect will show later."

Certainly, the sheer wealth of material — the jathas, the Vigyan Rail exhibition, the literature and audio-visual kits — is bound to leave a residue of interest and curiosity behind. The challenge is to stoke the fire of interest and keep it burning with the right kind of focus. 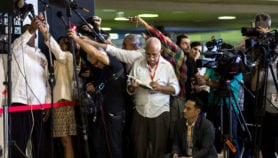 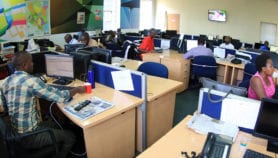 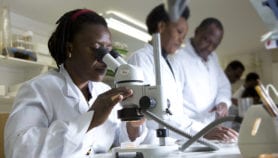