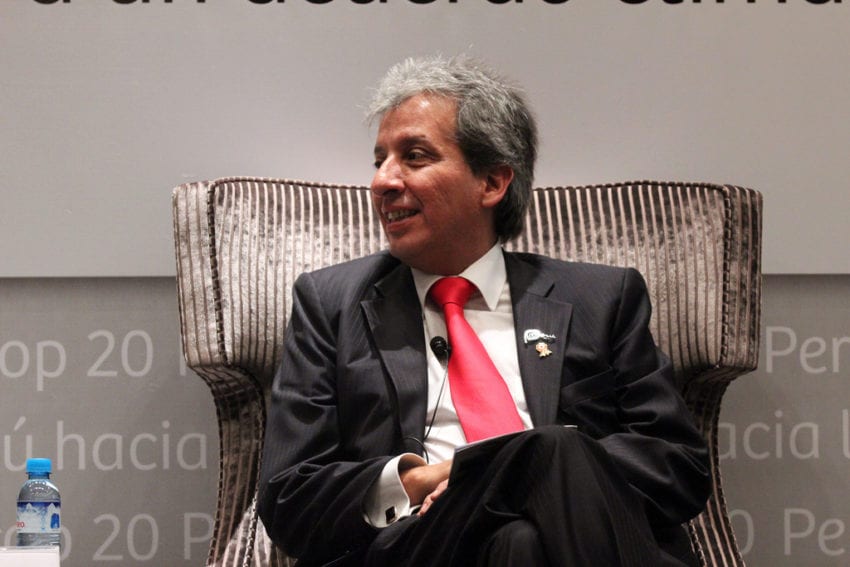 [LIMA] The next UN climate summit, which will take place in Latin America, in Lima, Peru, is on the horizon (1-12 December). It is the last step towards the potentially pivotal 2015 summit in Paris, France, where a new international climate agreement to replace the Kyoto Protocol that was adopted in 1997 is expected to take shape.

In the run up to the Peru summit, the 20th session of the Conference of the Parties to the UN Framework Convention on Climate Change (COP 20), SciDev.Net talks to the country’s environment minister, Manuel Pulgar-Vidal, about the event, and science and technology’s role in addressing climate change.

What will be hardest topics to agree on at COP 20?

I think they will be the same old topics that have been dragging on since COP 15 in Copenhagen in 2009. Those to do with the principles of ‘common but differentiated responsibilities’, financing, countries’ legal obligations, technology transfer and international mechanisms to address loss and damage. It is interesting to see the recurrence of these same topics while we are getting closer to the end of the extended ‘commitment period’ that was granted to get a new agreement on climate change. Because of all this, it is a fact that a creative response is needed.

But there are still elements of polarisation?

There are indeed, but it is also very important to approach the discussion as a whole, as an integral problem. Topics like financing are linked to mitigation. This, in turn, is linked to issues such as technology transfer and forests. Financing is also linked to adaptability, which is, at the same time, linked to the most vulnerable countries: the small isolated states. Everything is interconnected. Unless we think of this negotiation as interconnected, we will fail. It is important to see how all these scenarios are integrated so we can obtain a better atmosphere of trust that generates a better understanding.

Are you optimistic about getting an agreement at COP 20?

I really think that the urge for a binding agreement on climate change is going to lead us to achieving that. But I am really certain it is going to have special characteristics: Kyoto is not going to repeat itself, this is a fact! The world has changed. Although there are principles still standing, like the principles of common but differentiated responsibilities, this does not mean that any country could be exonerated from fulfilling its duties.

How can the summit make developed countries, especially the United States and Japan, come to terms with legally binding reductions in emissions?

If we reach a decent level of comprehension about the need for all of us to contribute in one way or another to limit or reduce emissions of greenhouse gases to avoid future consequences, we can make it.

Under the system of ‘pledge and review’ agreed at COP 15 in Copenhagen, science was left out of the guidance for national emissions goals, with each country given the power to suggest its own mitigation measures. Could this be an obstacle for a significant agreement in 2015?

I do not think science was left out. I think there was a strategy to get agreement among the parties, so there was a goal-oriented decision to leave the agreement and future COPs in good standing.

In COP 15, it was believed that the process of getting a new agreement was dead. It was believed that the climate governance process — meaning all the countries involved in the new agreement — was also dead. COP 16 in Cancun, Mexico, had the virtue of resuscitating the process, but to make it succeed in the long term, it was necessary to take a new decision on the Kyoto Protocol, then due to expire in 2012. It was obvious that a new agreement was not going to be obtained immediately. What was obtained at the subsequent COPs was the acceptance of the idea that this process would take longer. This also meant that a new agreement on climate change would not be made until around 2015, coming into force by 2020.

The big question was what to do between 2012 and 2020? That is why the Kyoto Protocol got a new commitment period. For all of this, I think science was not put aside, it was simply recognised that the process had to stay alive and that we also needed a new transition period where rules were played down to make it easier to agree a new understanding. But science has always been present and it is going to be present whenever we start verifying the accomplishment levels of any new agreement.

Do you think the scientific community should put more pressure on governments about greenhouse gas emission reductions?

The scientific community plays an important role at national and global levels to make different predictions about the consequences of climate change and the measures we must take to confront it and minimise its aftermath.

Scientific information is essential to understand the future we are approaching. The logic of building economies that are resilient to climate change has a lot to do with science. I also think science plays an essential role in spreading information … and in determining how we should prepare and also in the way we reach those who have the power to decide politically.

Technological innovation is likely to play an essential role in the battle against climate change. What commitments should the international community make in this field?

I believe technological innovations will allow us to better confront our obligations on mitigation and improve our adaptation abilities. The big challenge is trying to get our energy production linked to alternative, renewable, non-conventional sources. All of this is totally linked to technology. That is the reason why technology transfer and capacity building are two of the topics to be discussed at the next COP.

The role of developed countries and what developing countries should do will be discussed there too. I believe countries like ours have to deal with topics like urban development, and modifying building methods to internalise the concept of sustainability.

What could developing countries commit in terms of technology development?

We must think not only about technology, which we always tend to think about and label as modern, but also about ancestral or traditional technology, which is essential to confront climate change. There is a link to ancient technologies that must be reinstated. For example, how to preserve water, a vital concern for countries losing their glaciers. These technologies need no big investment. In countries like Peru, with ancient peoples, there is a great reserve of ancient knowledge that is not used as much as it should be. It makes sense that terraces, platforms and reservoirs are ancient technologies that we must rescue to be integrated with modern technology as a new response to new challenges.