The danger is clear in DRC Ebola outbreak 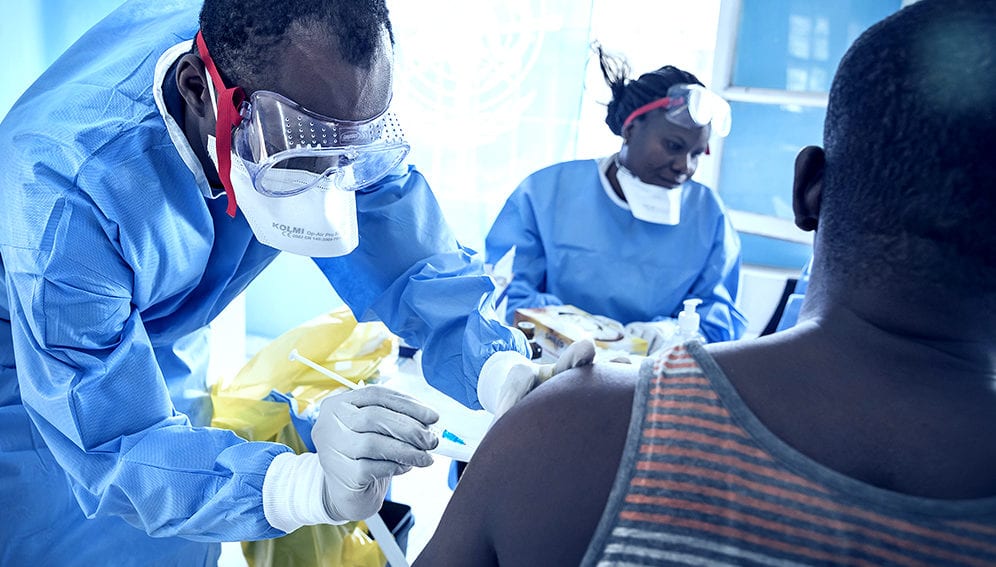 Zambia is the latest country to step up Ebola preparedness in response to this year’s outbreak in the Democratic Republic of Congo.

At the start of autumn, the WHO called the ongoing Ebola outbreak a potential “perfect storm”, after prevention activities in the north-eastern city of Beni were halted due to an attack by rebels.

The situation is grave. The WHO’s head of emergency response, Peter Salam, told a news conference at the time “we were only able to reach 20 per cent of the contacts of confirmed and probable [cases] in and around Beni”.

“It means that we are unable to follow up 80 percent of the people who are at direct risk of Ebola in Beni.”

Ebola may kill one in every two people it infects, and more than 100 people have died in the populous North Kivu region of DRC since the virus was first detected at the start of August.

By Derivative work: User:Profoss – Original work:NordNordWest – This W3C-unspecified vector image was created with Inkscape. This vector image includes elements that have been taken or adapted from this:  Democratic Republic of the Congo adm location map.svg (by NordNordWest)., CC BY-SA 3.0, Link

The eastern DRC region is locked in a battle with a Ugandan Islamic rebel group calling itself the Allied Democratic Forces. Neighbouring Uganda has stepped up border controls in response to the outbreak, yet people in the region are wary of authority after years of war, which makes disease control measures difficult.

However, the experiences of the last Ebola epidemic show the urgency of applying stringent controls. In 2014-2016, 11,000 people died in what became the world’s worst Ebola outbreak on record.

In the words of Tom Frieden, director of the US Centers for Disease Control and Prevention (CDC): “If Ebola had not been rapidly contained in Lagos, Nigeria, a densely populated city with many international airline connections, the disease most likely would have spread to other parts of Nigeria, elsewhere in Africa, and possibly to other continents.”

That time, the WHO waited around 4 months before pulling the emergency cord and declaring the outbreak a public health emergency of international concern.

The CDC concluded afterwards that the slow response had contributed to the scale of the outbreak. Considering the political powder keg that is the DRC, authorities must not delay this time around.