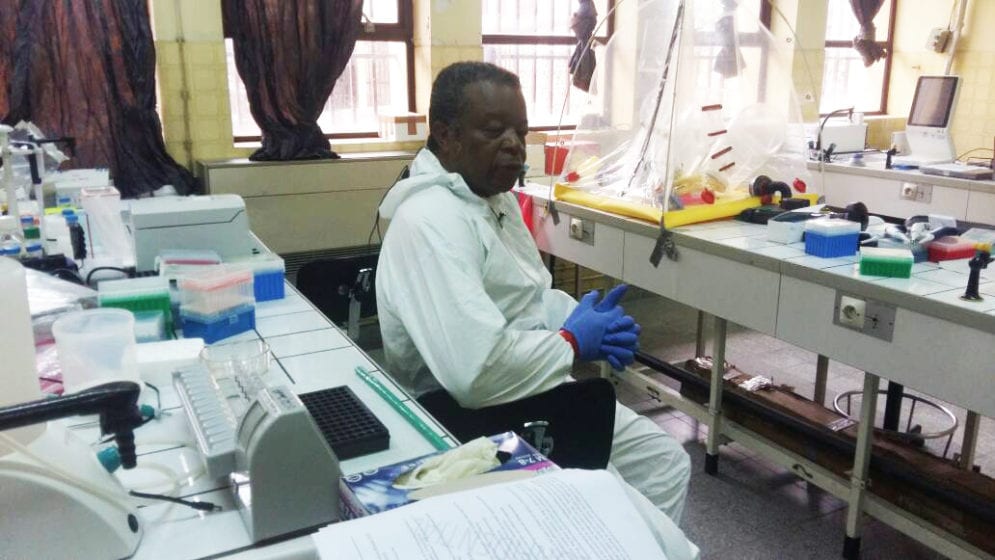 Professor Jean-Jacques Muyembe, in his laboratory at the National Institute for Biomedical Research in Kinshasa. Copyright: SDN / Poly Muzalia

[KINSHASA] Dr Jean-Jacques Muyembe-Tamfum was one of the first researchers to come across the Ebola virus. In 1976, when he was still a young professor of microbiology at the University of Kinshasa, the Ministry of Health dispatched him to the village of Yambuku in northern Democratic Republic of Congo (DRC) where an unknown disease had claimed dozens of lives.

Later described by The Lancet as the "Ebola hunter", Muyembe-Tamfum could have had little idea then that this first encounter with a new filovirus would lead to an entire career dedicated to fighting the disease. More than 40 years on, the 73-year-old continues to wage a merciless war with the number one public enemy in the DRC, inspiring respect and admiration.

Now he is head of a national committee of experts, "coordinating all activities to implement the disease response strategy".

After many hurdles and setbacks, the Congolese researcher can finally find something to smile about. The scientific community has confirmed the effectiveness of two new treatments to fight Ebola, REGN-EB3 and mAb114, products consisting of monoclonal antibodies developed by the US laboratories Regeneron and Ridgeback Biotherapeutics respectively.

While he stresses that he is not linked to the implementation of REGN-EB3, Muyembe-Tamfum’s role in designing mAb114 is unquestionable. The drug was designed following a therapeutic scheme inspired by the researcher.

The Japanese government, in recognition of his tireless efforts to contain the disease, has decided to award him the Hideyo Noguchi 2019 Award for Africa, which honours people for their outstanding contributions to fighting diseases and improving public health in Africa.

SciDev.Net correspondent Patrick Abega met Muyembe-Tamfum at the headquarters of the National Institute for Biomedical Research (INRB), in Kinshasa to discuss his life’s work.

A Cameroonian researcher recently told us that it was you who first proposed the use of antibodies from the blood of Ebola survivors, but the approach was rejected before being adopted a few years ago by American researchers. What exactly happened?

That’s correct. During the 1995 epidemic in Kikwit, a Congolese team had transfused the blood of eight convalescents in eight cases of acute Ebola. The idea was that the antibodies contained in cured patients could also neutralise viruses in sick patients. So, out of eight patients treated in this way, seven survived. But the scientific world did not accept this method as conclusive, and it was dismissed. It was only 20 to 30 years later that we said we needed to review the role of antibodies in neutralising the Ebola virus, and that's what happened. Most newly developed drugs are based on this principle.

It has been noted, especially during the 2014-16 West Africa epidemic, that Ebola survivors still have the virus in their body fluids, including sperm. Do the newly developed treatments rectify this?

We have not yet tested the effect of monoclonal antibodies on particular liquids such as sperm, but there is one product, namely Remdesivir, which has been used in West Africa to treat this type of case where the virus persists in the body of the sick. This is an idea that we will explore later, using a monoclonal antibody to eliminate this virus that is hidden in some liquids like sperm.

What conditions must be met to obtain the best results with these new drugs, REGN-EB3 and mAb114?

We have not yet really established the criteria, but what we have observed is that if the patient presents [himself for treatment] early after the onset of symptoms, there is an 89 per cent chance, or even 99 per cent chance, that the drug will work well and that the patient can heal. We therefore encourage Ebola patients to visit the treatment centre as soon as possible to receive these molecules. But with all the molecules at our disposal, I believe that the end of the epidemic is near.­­

How could the scientific community, in a few months, make so much progress in the fight against Ebola? What was the trigger, especially in relation to the latest drugs?

I can really only speak for mab114, which is our molecule; I’m not very familiar with REGN-EB3, developed by Regeneron. For mAb114, the story begins with a patient cured during the Kikwit epidemic whose help I enlisted here at the INRB. I was convinced that the antibodies of healed people can offer protection, so we spoke to researchers at NAS [the US National Academies of Science, Engineering and Medicine]. I sent this cured patient to the US, to NAS, along with a young researcher who would work on his samples.

It is during all these studies, and with the collaboration of Swiss laboratories, that a monoclonal was isolated, with the capacity to cure monkeys infected by the Ebola virus. It is from there that we told ourselves that there is activity against Ebola contained in this blood. Studies were conducted in the laboratory and this is how this antibody has been purified and can now be given to patients.

You have advocated for the introduction of a second vaccine, the Johnson & Johnson MVA-BN. Where are we now on this?

Let's say that for the moment the MVA-BN is not yet used on our soil. We are studying the conditions under which this vaccine can be used and the communication strategy for the population. But it is a vaccine that has already been used in Guinea and is also being tested in Uganda. As far as our country is concerned, we will soon see how we can introduce it.

The Japanese government recently decided to grant you, together with Dr Francis Gervase Omaswa, the Hideyo Noguchi Prize, in recognition of your efforts in fighting Ebola. What does this mean to you?

The Noguchi Prize I am receiving is, in a way, the crowning glory of my career. I think it's timely and I feel a lot of pride.