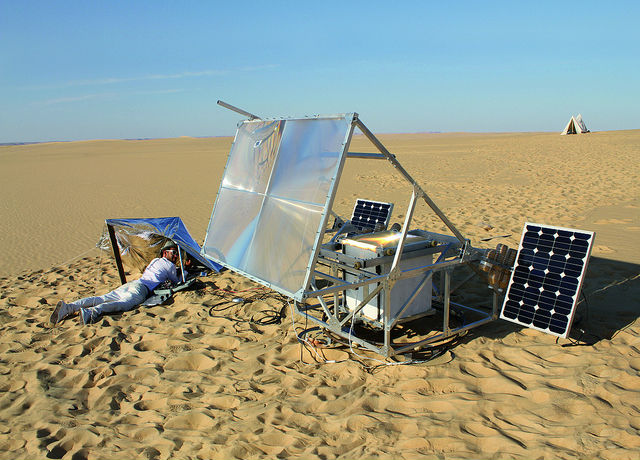 A three-dimensional (3D) printer powered by sunlight has been developed with the aim of turning desert sand into glass. Now, experts are recognising the device as a promising first step towards a future large-scale industry.

The machine, developed by German designer Markus Kayser, is called the Solar Sinter. It takes its name from both its energy source and the technique it harnesses — sintering — which converts a powdery substance into a solid form by heating.

3D printers use laser technology to create precise solid shapes from a variety of powdered metals, plastics and resins. Its most common use is in creating prototypes for engineering projects.

Kayser's device replaces the laser with the sun's rays and the powdered material with common desert sand. He believes it could be used to exploit the largely untapped natural resources of deserts in the Middle East and North Africa.

The Solar Sinter uses a large Fresnel lens, which is designed to capture the same amount of light as conventional lenses but is lighter and thinner. The lens rotates towards the sun throughout the day to capture light, which melts together layers of sand contained within the device to produce glass objects.

Digital designs can be downloaded from a computer onto a simple memory card and transferred to the machine. The Solar Sinter then follows the models' 'instructions' and prints out 3D reproductions of the designs.

Kayser, who developed the Solar Sinter in 2010 during his studies at the Royal College of Arts in the United Kingdom, says that in the future the process could become the most cost-effective way of producing glass, because solar energy and sand are abundant and free, and large-scale factories could be built in the desert.

The lens costs about US$600, making it cheaper than most of the parabolic devices used to capture light in the desert, says Kayser. Eventually the process could produce a variety of artefacts ranging from glass vessels to the surfaces for photovoltaic panels.

"I would really love to see companies using or developing this process into a business," he says. "Many ideas remain stuck in university, but it would be nice if the Solar Sinter concept became a commercially viable process as, in the end, it's free and clean energy."

A ceramics company interested in the Solar Sinter's applications sponsored one of Kayser's latest research trips to the Moroccan desert, which he believes is a positive sign.

Robert Jeffreys, a 3D printing consultant at the UK-based company Inition, says: "There is potential in the idea of machinery that can use what is already on location, to produce things."

"I think [the Solar Sinter] would be useful in places where the raw material is in great supply but is inadequate for most conventional manufacturing."

In the future, says Jeffreys, 3D printing could become advanced enough to produce high-quality objects, and the Solar Sinter could be the first step towards this long-term goal. "3D printing is now raising an exceptional interest from the media," he adds. "Popularity could attract funders and speed up the research."

Jeffreys says that one of the major problems in the 3D printing industry worldwide is the high cost of materials: "Research centres and universities in developing countries often have a 3D printer but they rarely use it because they can't afford the specific plastics. Having free materials would probably make the difference."