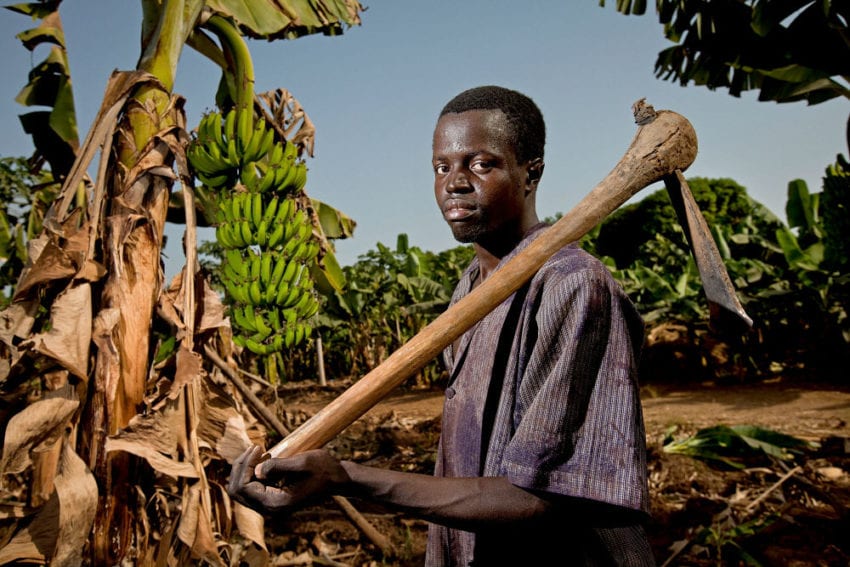 A man with a hoe stands in a banana plantation Copyright: Panos

[NAIROBI] Scientists have shown through genomic prediction models that it is possible to speed up banana breeding, giving hope to breeders and smallholders looking for improved varieties.

Banana is an important staple crop for millions of people in Sub-Saharan Africa, especially those in East Africa.

In a study published in The Plant Genome last month (2 March), researchers collected data on 15 key traits from 307 banana types that were grown in two fields in Uganda under low and high input field management conditions. The data covered two crop cycles from 2013 to 2016.

“Banana breeding is a lengthy and costly process, taking up to 20 years to deliver improved varieties to farmers.”

The researchers grouped the fruit plant’s traits into five categories: plant stature, suckering behaviour, black leaf streak resistance, fruit bunch and fruit filling. They then mapped DNA differences and assessed the ability of six genomic prediction models to use cross-validation to identify the bananas with the best traits.

“The results demonstrate that genomic prediction is possible in banana breeding and the prediction accuracy can be improved by using models based on data from many different environments,” says Moses Nyine, a research scientist at the International Institute of Tropical Agriculture, Uganda, and a co-author of the study.

His team found the accuracy of genomic prediction to be above 75 per cent.

“Banana breeding is a lengthy and costly process, taking up to 20 years to deliver improved varieties to farmers,” adds Nyine, who is also a doctoral student at Palacký University in the Czech Republic. But breeders can increase breeding efficiency, reducing the cost and time required to deliver high-yielding and disease-resistant varieties to farmers, he says.

Paul Kimani, a professor of plant breeding and genetics from Kenya’s University of Nairobi, tells SciDev.Net that the study demonstrates simultaneous selection of multiple traits of importance not only to farmers but also to others along the value chain.

But much more needs to be done to assess performance of new varieties on the farm and in the market place, according to Kimani.

“One point that molecular breeders often overlook is that shortening time to develop a new variety is somewhat exaggerated,” he points out. “For instance, this study suggests that it will take about three to five years to develop hybrids using integrated genomic selection compared with 11-14 years for conventional breeding. But in reality the period is likely to be about eight to 13 years with genomic selection.”

This is because the new hybrids still need evaluation in several locations and on farms, as well as consumer acceptability studies – a process that can take an additional three to four years.

Moses Nyine and others Genomic Prediction in a multiploid crop: Genotype by environment interaction and allele dosage effects on predictive ability in banana (The Plant Genome, 2 March 2018)