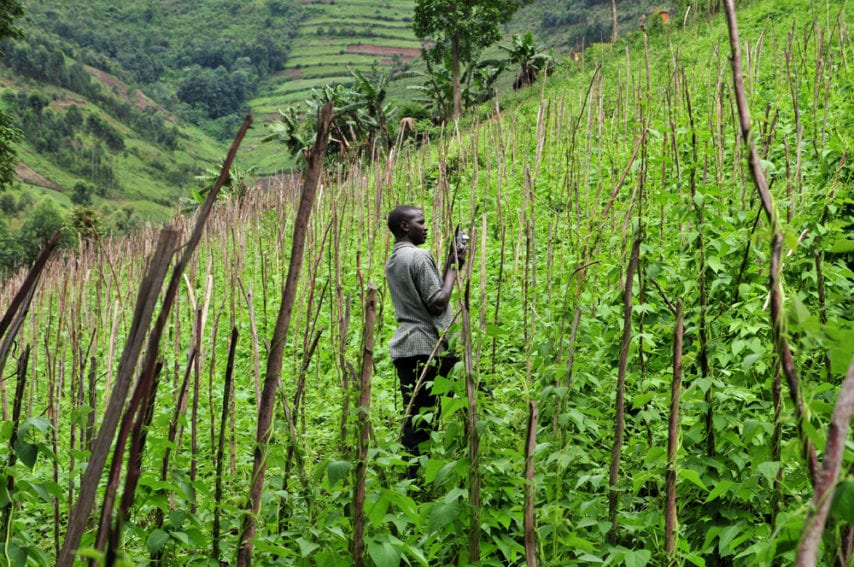 A large-scale research and development project has shown that giving farmers resources and advice on nitrogen fixation through legume plants can double yields and boost incomes in Africa.

But not all farmers are benefiting from this practice due to a lack of access to inputs, such as fertilisers says Ken Giller, the leader of the N2Africa project, as a second phase to widen access to the initiative is announced with US$25.3 million funding from the Bill & Melinda Gates Foundation for the next five years.

Researchers and representatives of NGOs and companies gathered in Nairobi, Kenya, yesterday to discuss the results of N2Africa’s first phase.

Through the project, around 252,000 smallholders in eight African countries were given legumes, such as soybeans, groundnuts or beans.

Such plants host soil bacteria called rhizobia in their roots that fix atmospheric nitrogen, which is important for plant growth, into the soil. These nitrogen-fixing bacteria can be added to the soil by applying an inoculant, a mixture of peat and rhizobia bacteria.

“We’ve got proof of massive improvements in yield at field level.”

As well as receiving new legume varieties farmers were advised to use improved inoculants, special fertilisers with more phosphate and were given advice on crop rotation and intercropping.

“We have measurements and observations on thousands of farmers’ fields across Africa,” says Giller, who is a plant scientist at Wageningen University.

Results from an early impact study presented at today’s meeting in Nairobi show that crop yields could double using the new legumes, inoculant and fertiliser.

The average increase in household income was US$335 a year instead of the hoped-for US$465 goal.

“We’ve got proof of massive improvements in yield at field level, due to the right combination of better varieties of legumes and rhizobia, adapted fertiliser and improved management,” Giller says. “Yet many farmers can’t access the right inputs like inoculants and fertilisers, or sow the crops at the ideal time, and that causes lower yields.”

The special fertiliser is often not available or is too expensive for farmers, he says. And, while inoculants are relatively cheap, they are not available everywhere.

N2Africa’s second phase will aim to increase farmers’ access to inputs such as fertiliser and inoculants. It will also work on access to markets for farmers to sell their produce.

There will also be more focus on building the capacity of African NGOs and researchers, says Giller, “to ensure a legacy of expertise that can develop locally appropriate nitrogen-fixing legume technologies in the future”.

Rudy Rabbinge, a member of the board of directors of the Alliance for a Green Revolution in Africa says N2Africa is an important project.

“Its most important outcome … is that it yields insights in how a development project can be run efficiently and effectively.”

See below for a video about N2Africa project in Malawi: