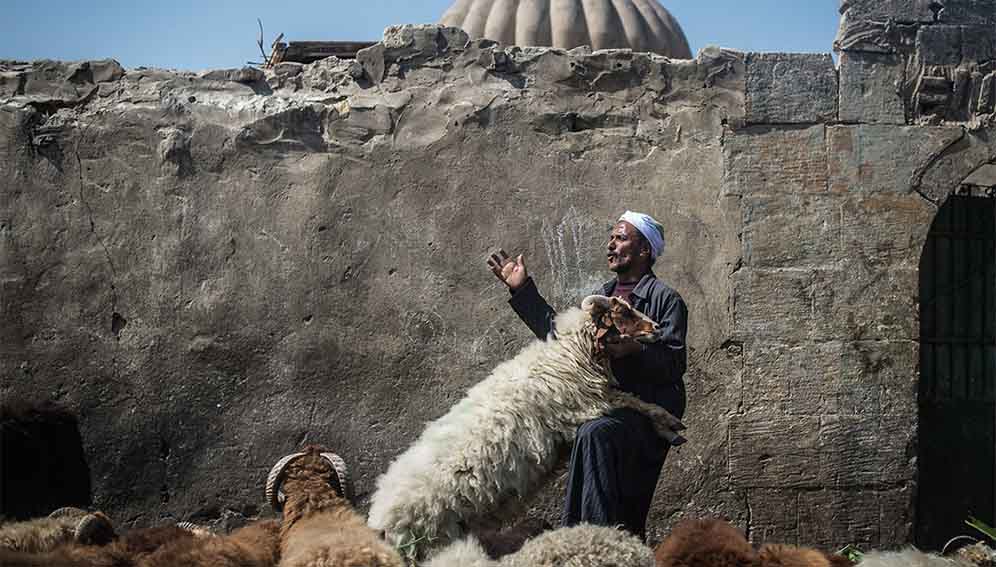 An Egyptian seller shows his sheep at a livestock market in Cairo. The WHO has called for strict rules around animal slaughter ahead of this weekend’s global celebrations for Eid al-Adha. Copyright: Pan Chaoyue, (CC BY-NC-ND 2.0). This image has been cropped.

By: Victor Jack and Fiona Broom

Health authorities are urging safe food handling and slaughter during Eid al-Adha, as livestock sales and meat donations have been encouraged to move online to prevent the spread of COVID-19 at markets.

The World Health Organization has called for strict rules around animal slaughter ahead of this weekend’s global celebrations for Eid Al-Adha — meaning festival of sacrifice.

While the source of the virus that causes COVID-19 is not yet known, evidence suggests it is zoonotic — a disease that can jump from animals to humans — and has been detected in domestic pets, such as cats.

“The majority of food aid is distributed into remote, hard to reach areas. We are making every effort to make sure we are following the guidelines in terms of COVID-19.”

“Understanding which animal species are most susceptible to the virus is important in discovering potential animal reservoirs to mitigate transmission and future outbreaks,” the WHO guidance for Eid al-Adha says.

The WHO recommends that slaughter does not take place at homes this year, instead suggesting that families distribute meat donations through centralised agencies.

About 1.8 billion Muslims will celebrate the annual four-day festival, which begins tomorrow. It is marked by many by slaughtering animals and distributing meat to family, friends and neighbours. Muslims are required to also make donations of meat to the poor — known as qurbani.

Pakistan’s Prime Minister, Imran Khan, recommended that people this year buy livestock online, to avoid open markets where people would come in close contact with each other.

App designers have anticipated the desire for online animal sales and qurbani donations. The Qurbani App replicates the process of buying at market, allowing Pakistanis to buy and sell animals, ask veterinarians for advice about livestock, and distribute meat. It offers cows, sheep and goats and pledges to distribute meat while providing live updates via Whatsapp.

Islamic Relief Worldwide says it has received about 150,000 online qurbani donations, which will provide meat to about three million people in 30 countries.

Seasonal programmes manager, Zaheer Afzal, says the charity organisation is working with local health authorities to carry out animal health checks, and maintain food hygiene at slaughterhouses and during distribution.

“We are delivering to houses, also in some cases small gatherings of up to 50 people by maintaining social distancing,” he says.

“We are making every effort to make sure we are following the guidelines in terms of COVID-19.”

Qurbani donations are not only a requirement in Islam, but they also provide some people with their only meal of meat in the year, Afzal says.

“In all these countries, providing basic food is one of the top priorities of the governments. The majority of food aid is distributed into remote, hard to reach areas,” he says.

Recipients are in conflict-ravaged Yemen and Syria, as well as parts of Africa, such as Somalia and Chad, that are facing drought, famine and prohibitively high costs for meat, Afzal says.

In its Eid al-Adha guidance, the WHO argues that cancelling religious gatherings “should be seriously considered”, to be replaced with virtual alternatives. Where this is not possible, the WHO says worshippers should use personal prayer mats and mosques should limit their capacity and length of services.

Iraq’s government has imposed a total curfew during the holiday. But, some governments in Muslim-majority countries have given the green light to limited festivities, though many places of worship remain closed as part of lockdowns.

Among its guidelines for preventing the spread of COVID-19 during Eid al-Adha, the Pakistani government has called for mandatory thermal screenings at mosques, while imams have been asked to give sermons on infection prevention.

Indonesia — which has the highest number of recorded COVID-19 cases in the WHO’s South-East Asia region — is imposing strict hygiene protocols for sacrifices. However, the government has also called for greater qurbani donations to charities amid increased economic pressures.