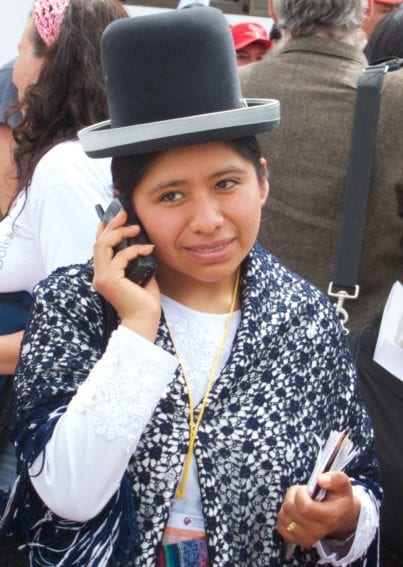 [LA PAZ] On 20 December, Bolivia plans to launch its first satellite, Túpac Katari (TKSat-1), from Xichang satellite launch centre in China — the country that helped develop it. TKSat-1 will help Bolivia reduce its US$15 million a year bill for renting foreign satellites’ time and services.

The aim is to provide telecommunication services throughout Bolivia, especially to people living in remote areas, Ivan Zambrana, director of the Bolivian Space Agency, tells SciDev.Net.

Zambrana explains that, in the late twentieth century, Bolivia and other Andean countries took part in a previous project to launch a satellite that failed because of a lack of funding. The TKSat-1 will relay broadcasting services, telephony, Internet, telemedicine and distance education.

But Zambrana adds that the country will still need to rent other satellites to make sure it is not relying on a single source of such key services.

“Every year, more satellite capacity is required … [and] Bolivia will provide retransmission services.”

Alexis Andrade, coordinator of the Bolivian Space Agency’s scholarship holders in Beijing, China, tells SciDev.Net that the services provided by the satellite will close the rural-urban technology gap and remove internal borders.

Zambrana says: “The next generation of rural children will also be a ‘digital native’ generation and will have similar opportunities to those children in the cities […] Then we will see the real effects of access to the information and communications technology in the lives of people.”

The satellite will allow complete coverage of Bolivia’s national territory and will also let Bolivia rent out services to South American countries such as Colombia, Ecuador, Paraguay, Peru and Uruguay.

“Every year, more satellite capacity is required,” says Zambrana. “Bolivia will provide retransmission services to countries which choose the Bolivian satellite as a new option.”

Around 85 per cent of the costs are covered by the Development Bank of China and 15 per cent by the Bolivian government.

China Great Wall Industry Corporation, a subsidiary of China Aerospace Science and Technology Corporation, has launched 43 satellites and assisted in 37 more launches for international clients from 18 countries and regions, according to a recent article in China Daily (29 October).

The TKSat-1 is named after Túpac Katari, the Bolivian indigenous leader who died leading a rebellion against Spanish colonists in the eighteenth century.

Last month, Peru launched two satellites designed and built at a university in Lima, from a Russian platform.

The satellites, PUCP-Sat 1 and Pocket-PUCP, were made by a team led by Jorge Heraud from the Radio Astronomy Institute (INRAS) at Pontifical Catholic University of Peru (PUCP). They are the result of four years of research.

Both satellites will be used for academic research into space engineering, but the hope is that eventually Peruvian satellites can collect information about temperature and climate.

“The information they collect will be used for us to verify their resistance in adverse climatic conditions so we can improve the thermal design of future satellites,” Heraud, director of INRAS and senior professor of PUCP, tells SciDev.Net.

Link to article in China Daily.