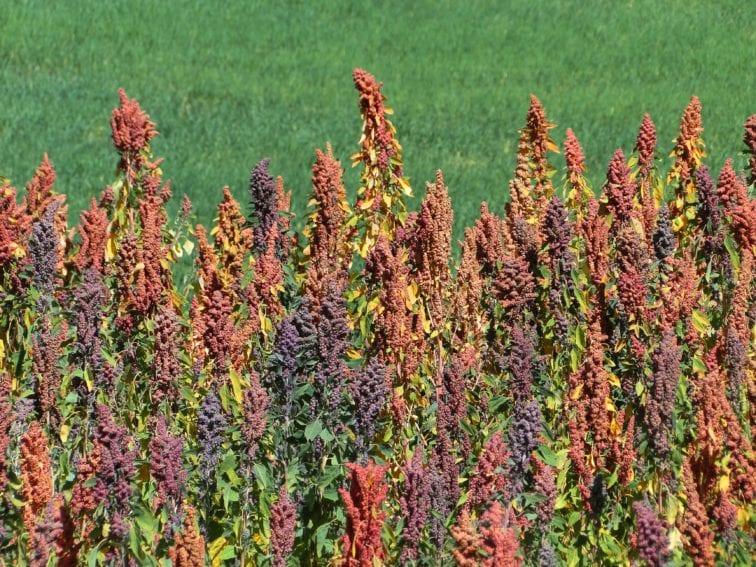 Quinoa farming may be squeezing out llama and sheep farmers Copyright: Flickr/GloballyImportantAgriculturalHeritageSystems

[LA PAZ] Bolivian scientists have warned that growing international demand for quinoa is endangering local farming practices and the environment, as well as denying access to local consumers.

Their caution follows the UN's kick off last month (20 February) of a year-long series of cultural, artistic and academic activities — along with scientific research — to celebrate 2013 as the International Year of Quinoa.

Quinoa (Chenopodium quinoa), a grain-like crop cultivated in the Andes for 7,000 years, has remarkable nutritional value and adapts well to a variety of growing environments.

The UN Food and Agriculture Organization (FAO) said in a press release that quinoa offers an alternative food source for countries suffering from food insecurity as populations rise and the climate changes.

"In Kenya and Mali, the crop is already showing high yields," it states, adding that it holds promise for cultivation "in the Himalayas, the plains of northern India, the Sahel, Yemen and other arid regions of the world".

In recent decades, the increase of exports from Andean countries to countries such as Canada, France and the United States has made quinoa an important source of income for producers in the Southern Altiplano region of Bolivia.

But local experts say that the current mode of export-oriented production is causing soil erosion, and spreading into wild areas where local communities farm livestock such as llamas and sheep.

"The cultivation of quinoa in current conditions is unsustainable," Vladimir Orsag, an agronomy researcher at the Higher University of San Andrés, in La Paz, Bolivia, tells SciDev.Net.

Satisfying foreign demand leads farmers to handle the soil poorly, not allowing it to rest fallow or be fertilised by livestock. Orsag says this leads to a decline in the quality of soil and an increase in pests.

He suggests improving the quality of the soil in areas where quinoa is already grown, rather than expanding further into wild areas.

But there is no government strategy to boost research, he adds, although President Morales announced recently (26 February) that a project to industrialise quinoa production will begin at the end of March.

Enrique Ormachea, a researcher at the Center of Studies of Labor and Agrarian Development (CEDLA), says that as long as the production of quinoa in the Southern Altiplano is driven by profit and for the foreign markets, it will be difficult to return to traditional crop management.

"Traditional farming practices corresponded to quinoa production for local consumption and this scenario has changed radically in recent years," he tells SciDev.Net.

Ormachea adds that the more cultivated areas expand, the more the production will become mechanised, use genetically improved seeds and insecticides, and require wage labour.

Orsag highlights the need for a close relationship between the responsible state institutions, such as the National Institute of Agricultural and Forestry Innovation, and universities or research centres on devising policies and improving farming practices.

He adds that current cropping practices are affecting the domestic consumption of quinoa in Bolivia, and that the country's policies should also address local consumption.

Felix Mamani, a researcher at the Choquenaira Experiment Station at the Higher University of San Andrés, tells SciDev.Net that local rural communities are still eating quinoa, although in smaller proportion than in past decades.

But in urban areas, he adds, people are losing the habit of consumption, in part because prices increase with the behaviour of external markets.