The village of Godavari sits on the southern slopes of Kathmandu Valley, a short ride from Nepal’s capital. Here, in a forest, is the knowledge park of the International Centre for Integrated Mountain Development (ICIMOD), an intergovernmental knowledge-sharing institute.

A visit to the park is a dip into a living library of tradition, culture and innovation relating to development, farming and agroforestry. The collection both preserves ancient knowledge and evolves as new ideas transform Nepal’s rural landscape. Over 30 hectares, researchers select, test and showcase various technologies useful for those living and working in the Himalayan region. 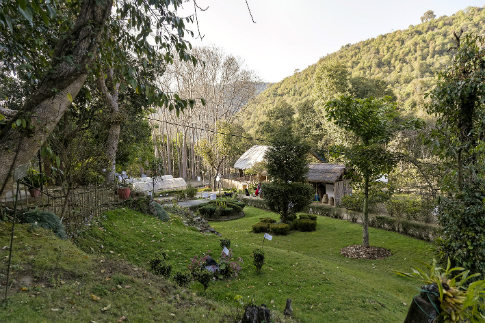 Since it opened in 1993, the park has tested sustainable farming practices suited to the mid-hills of the Hindu-Kush Himalayas, a mountainous region stretching across Afghanistan, Bangladesh, Bhutan, China, India, Myanmar, Nepal and Pakistan. 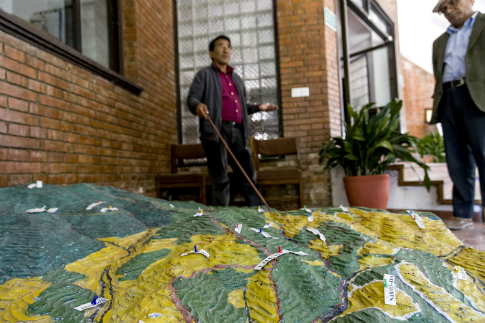 A three-dimensional model of the terraced park

The park hosts various low-tech tools intended to reduce poverty and conserve the habitats on which villagers depend. Researchers work to improve crop yields, develop better soil and water management techniques, and promote income-generating activities such as beekeeping and growing kiwi fruit. 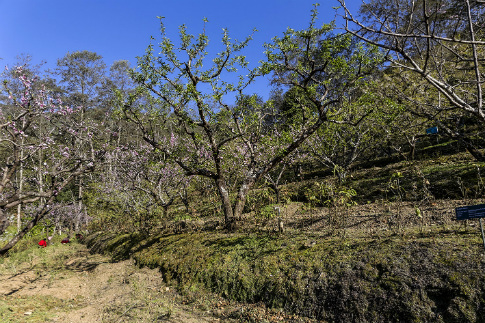 Much of the park comprises sloping land. It hosts 649 plant species, representing a tenth of Nepal’s 7,000 higher plants

More than 40,000 people have visited the park. Government representatives, NGOs and UN organisations, community leaders, scientists and academics come to learn about practices they can disseminate.

The park also organises training that is popular with students, farmers and women, who are entrusted with the care of children, the elderly and the household, and eager to learn new ways to manage their domestic routine more efficiently.

Hundreds of people have been trained in subjects ranging from agricultural technologies suitable for sloping land to the use of geographic information systems to prepare forest inventories of tree species. These hands-on sessions are designed as a grass-root tool for technology transfer. People can adopt what best suits their business and traditions.

For instance, the park’s rainwater harvesting pond has been replicated in six of Nepal’s 75 districts.

In recent years, ICIMOD embarked on a community outreach programme, teaming up with local NGOs and other organisations to increase the impact of the technologies it showcases and scale up their use.

The knowledge park’s staff organise demonstrations for communities off-site, travelling to neighbouring villages as well as to mountain communities living far away, such as in the Everest region of Nepal, Meghalaya in India, the Chittagong Hill Tracts in Bangladesh, and Badakhshan and Bamyan provinces in Afghanistan.

Over the past few years, ICIMOD has also distributed more than 250 kilograms of seeds and 600,000 seedlings from the knowledge park’s nursery to agricultural organisations and farmers. 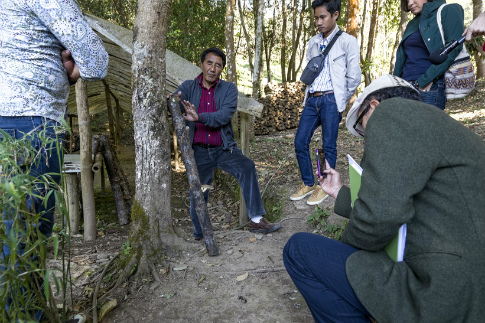 Many villages in the Hindu-Kush Himalayas are off-grid, and the lack of electricity hinders their economic development. The park hosts examples of how cheap and simple renewable energy technologies can support farming and wider mountain life.

For example, solar energy can replace the use of wood and fossil fuels, reducing deforestation and indoor pollution from smoke. It also protects local people from fluctuating fossil fuel prices.

Solar technologies can work nearly everywhere, and they are crucial resource in places without an electricity connection. One example demonstrated at the park are solar dryers, which use the sun’s heat and airflow to desiccate food. 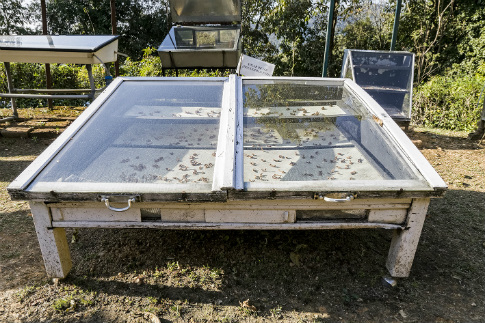 Farm produce in a solar dryer

Solar dryers are popular in the region because they allow farmers to process their produce more efficiently and hygienically than traditional methods. Before solar dryers were introduced, farmers simply placed fruit and vegetables on a surface and let the sun do the rest. But in rural settlements, most surfaces are contaminated with dust and animal waste, which can contaminate the food.

The devices can be used for both subsistence purposes and for commercial reasons to make various dried goods, from cardamom pods to dried fruits such as apple slices.

However, although solar dryers are widespread across Asia, “the most commonly used solar technology is the solar cooker”, Samden Lama Sherpa, knowledge park officer, tells SciDev.Net.

These systems are common in three other Nepali districts, the Bhutanese refugee camps in Nepal and in Tibet, he says. 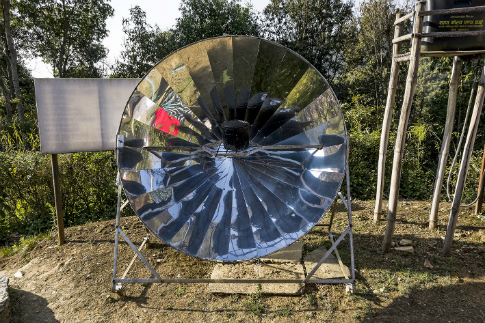 The highly reflective curved dish of the solar cooker at the park concentrates solar rays on a focal point where a pot is placed. The dish can be moved to face the sun. On a sunny day, a solar cooker can generate around 700 watts, which is enough power to cook rice and soups.

The park also displays examples of photovoltaic technologies, which are less common than solar dryers and cookers, but, according to Samden Lama Sherpa, used both in urban and rural areas in Nepal. Solar voltaic panels convert radiation from the sun into electricity, and are used for lighting, charging batteries and powering water pumps. 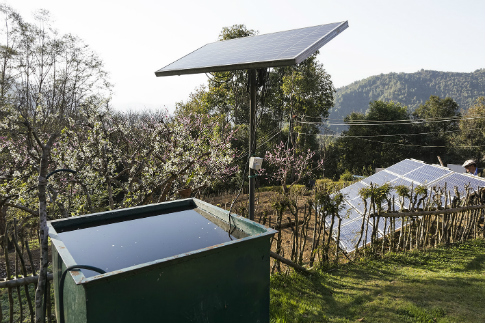 The park also hosts technologies that respond to other needs of the mountain communities. For instance, ‘beehive biobriquetting’ is used to produce smoke-free briquettes shaped like beehives from biomass or waste such as pine needles, sawdust, rice husks or waste paper.

First, biomass is converted into charcoal through partial combustion in a charring drum. The resulting powder is then mixed with bentonite clay and pressed into moulds. 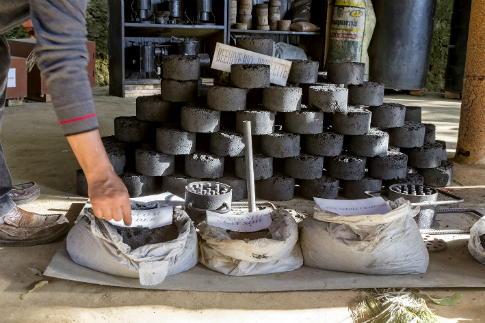 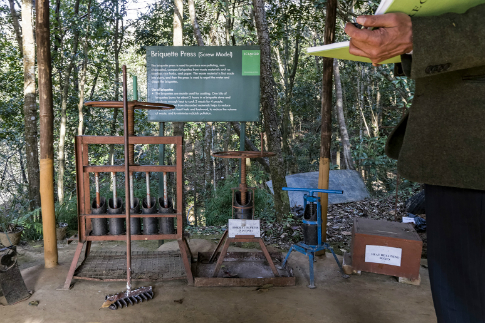 The biobriquettes can be made in presses

Finally, the biobriquettes are left to dry in the sun. Once ready, they will be used for cooking and heating, with the excess sold.

“There are different types of biobriquette and the beehive type, made from charcoal dust, is used for both room heating and cooking,” explains Samden Lama Sherpa. 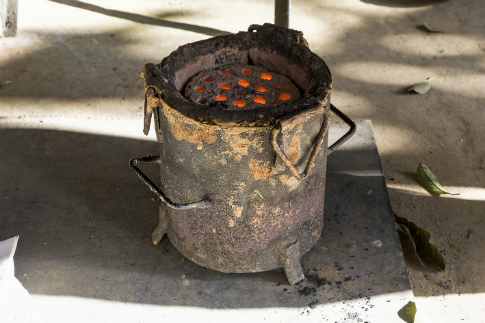 The holes running through the briquette provide efficient airflow, and the smokeless burning prevents air pollution

As well as energy, water is pivotal to the lives of mountain communities, but its management comes with a set of challenges. For example, water sources can be far from households or fields. Feet-driven pumps called treadle pumps can be used to raise water from a depth of up to six metres. 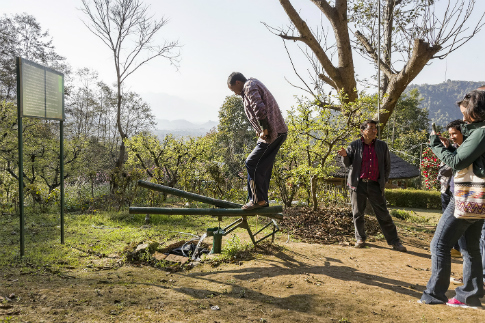 A treadle water pump made from bamboo

Where water is abundant but streams are poorly managed, water flow can erode the soil, especially in areas where intensive land use has left the soil arid and unstable. This can harm the ecosystem.

Improving water management at a local level is not expensive, it just requires simple strategies. Stone- and grass-lined waterways reduce soil loss by channelling the water that would otherwise wash away topsoil and nutrients from the fields. 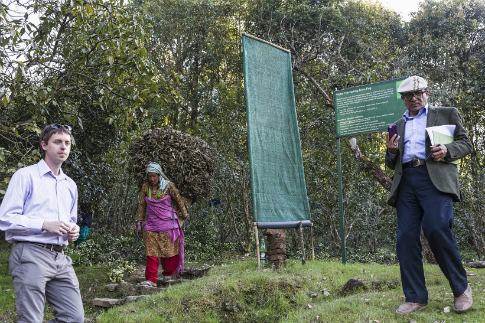 The earthquake caused only some minor damage to the park itself, but, according to David Molden, ICIMOD director-general, it made the centre’s researchers realise the role that keeping farming knowledge safe and alive can play in reconstruction.
“We need to think about how to use the knowledge park to demonstrate better ways to reconstruct,” he told SciDev.Net a few weeks after the earthquake.

“One of the discussions [we are having], for example, is whether to put up a model of an earthquake-resistant home using different materials but still keeping the Nepali culture in mind.”

Five months after the earthquake, this idea is now becoming reality. “We will be working with the Asian Institute of Technology, which has designed hand-pressed cement and mud bricks,” Molden told SciDev.Net, adding that this technique avoids the use of brick kilns, a major source of pollution in Nepal.

“These bricks have an interlocking design and have holes in the middle so that people can put steel bar or even bamboos for reinforcement,” he explained. This, he believes, is a crucial element to meet the needs of local people. “There is flexibility in the design, so that we can keep the look and functionality in the Nepal tradition, which I believe is very important.”

Invest in research to save Africa’s agriculture

Calls for halt to funding for industrial agriculture