What can ‘frugal innovation’ do for development? 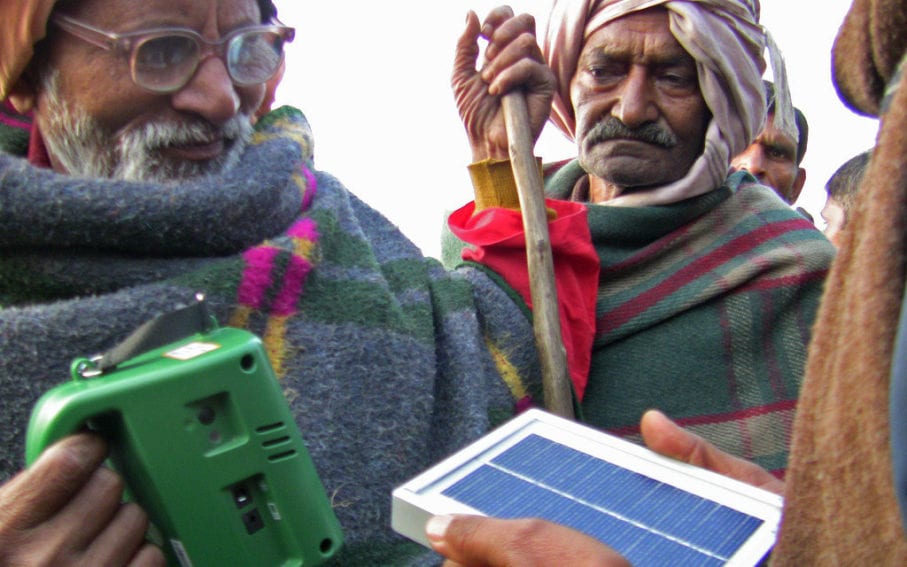 But instead of taking water samples back to a distant lab for analysis, VanderGiessen simply put a drop of water onto a plastic chip containing three electrodes. A miniature electrochemical analyser then processed and displayed the results on an Android tablet computer within seconds.

The trip was part of a project that VanderGiessen is working on with her university’s Frugal Innovation Lab, a programme in the engineering department that seeks cheap, rugged ways to overcome problems in the developing world and at home. She was examining a prototype of a portable device to quickly test water for arsenic contamination in the field — designed and built by her student colleagues.

Arsenic contamination is a serious, long-term problem in West Bengal, according to Xavier Savarimuthu, head of the environmental science department at St. Xavier’s College in Kolkata, who collaborated with the Santa Clara students on the project.

“The problem was first detected in the 1970s, so it is almost a four-decade problem,” he says.

In most cases, local people don’t even know if their water is contaminated, he says. In his research, Savarimuthu came across one man who had been drinking water contaminated with arsenic at a concentration of 1,200 micrograms per litre, more than 100 times the World Health Organization’s standard limit of ten micrograms per litre.

“The number one problem is to find out if the water is contaminated,” says Savarimuthu.

Previously, the only way to test for arsenic in much of west Bengal was to take water samples to a lab in a city around 100 kilometres away, a journey of nearly four hours, and this could still result in erroneous tests if samples were not collected or stored properly.

It was while Savarimuthu was a visiting scholar at Santa Clara that a solution began to take shape. After presenting his work on arsenic contamination there, he was approached by some members of the engineering department, who wondered if the Frugal Innovation Lab could help.

The project, funded by technology company Hewlett-Packard, was taken up by VanderGiessen's team. Bioengineers worked on the sensor, while electrical engineers designed the electrochemical analyser and computer engineers wrote the code for an app to display the data on the mobile device. When a prototype was ready, VanderGiessen headed to India to put it through its paces and see how their ideas stood up in the real world.

Every step of the way, the students worked with the people who will actually be using the device, to ensure it would be suited to their needs and appropriate to their local context in terms of design and cost constraints.

“We start with the end consumer … [and create] something that is not just affordable, but is adaptable, accessible and appropriate.”

That method is central to how the Frugal Innovation Lab operates, says Elizabeth Sweeny, the lab’s programme manager.

The lab has relationships with about 100 social enterprises around the world, which suggest ideas for projects and ways to test the results. “We start with the end consumer.

None of our projects is sourced from research, we truly go to the field,” she says. “That’s the philosophy behind the lab: creating something that is not just affordable, but is adaptable, accessible and appropriate.”

That process has already been formalised in the way innovators think about creating products for the affluent world, she says. “We don’t come up with an idea, make it and then see if there’s somebody to sell it to. You survey the market, you do target market analysis and then you design it to that market.”

But for some reason, that process often seems to be forgotten when dealing with developing markets, she says. “Ultimately, we are trying to apply that exact same methodology, but using the context of these consumers and working backwards from there.”

The intensive design work paid off and the arsenic detector worked well, successfully detecting arsenic at various concentrations both in the US lab, and in the field. But it was the on-the-ground testing in India that proved most useful.

Though they had spent the best part of a year on the design, the conditions in West Bengal quickly showed where the detector needed improvement.
For one thing, since the electrodes were exposed, it was not as robust as it needed to be. “We figured out very quickly that we were in the middle of monsoon season, so if the rain happened to come, our circuit would have been very vulnerable,” says VanderGiessen. The team is now designing a case to protect the electrodes from the elements.

VanderGiessen also found that the design, which had three parts, made the device too cumbersome for a single tester to comfortably use, so the team is seeking ways to combine some parts so it can be held in two hands. “We want to return and do another round of field testing in a couple of months once we have a more finalised prototype,” she says.


A wave of frugal innovation

The Frugal Innovation Lab has been running for three years, but it is not the only player in the field. The Little Devices Lab at the Massachusetts Institute of Technology, United States, uses commonly available items such as children’s toys to develop cheap and durable medical devices — including a microfluidics kit for blood tests made out of Lego.

Frugal Digital, a research group at the Copenhagen Institute of Interaction Design, Denmark, has come up with a way to screen for hearing loss using just a mobile phone. And a low-cost prosthetic knee designed by students at Stanford University, United States, was recently shortlisted for the Empowering People Award — a competition for simple and affordable technologies that was delayed after it was swamped with more entries than it could comfortably handle.

The idea of doing things cheaply, and using materials and processes that are appropriate for local conditions, was not, however, invented by engineers in California or Massachusetts.

Entrepreneurs in the developing world, especially in India, have been doing it for years, says Jaideep Prabhu, who studies business innovation at the University of Cambridge in the United Kingdom. Because they face significant constraints in resources — everything from money to energy and water — innovators in India are extremely frugal. “They are very good at taking cost out of the entire innovation process,” he says.

And because of the country’s unpredictable markets, the innovators are also flexible and good at improvising solutions. “They switch from Plan A to Plan B to Plan C very quickly, if they have any plans at all,” says Prabhu.

This has enabled small-scale entrepreneurs to make cheap and ingenious innovations that can improve life for those living in poverty. Two examples are the Mitti Cool Refrigerator, a clay fridge that does not require electricity, and a novel business model to provide affordable solar lighting to replace kerosene lamps (whereby a local agent gets a loan to buy the solar panels, and then uses them to charge batteries during the day, and rents out the batteries at night).

Bigger companies are getting involved too, says Prabhu. Tata Motors, which used the principles of frugal innovation — inexpensive materials and a focus on the basic needs of its customers — to develop its affordable Nano car, also developed low-cost water filters for the rural poor. GE Healthcare, a division of US multinational company General Electric, developed a cheap, portable electrocardiograph machine in India that doctors can use in rural communities.

“There’s a whole wave of this kind of innovation that’s starting to happen,” says Prabhu. “I think this has huge implications for countries like India because not only will it deal with fundamental inequality in society, but it will also generate a wave of growth for the economy, and for domestic and multinational companies.”

Sweeny says that is part of the thinking behind the Santa Clara programme, where the goal is not just to help those in developing countries, but also to better prepare their students for the world they will be working in.

“Not only are we motivated to do good, this is a competitiveness issue,” she says. “In an estimated three years, 50 per cent of global GDP is going to be in emerging markets. If our engineers graduate without knowing how to develop products while understanding the design constraints and contexts of these consumers, they’re going to be behind.”


Tempted by a challenge

What impresses Prabhu the most about the spread of frugal innovation in universities and companies in the developed world is that it is largely driven by students: young people who are bringing their energy and passion to challenging projects that will make a real difference on the ground. “I don’t think they’re doing this out of guilt, they just see this as a challenge, a huge opportunity to test their technical ability or their business ability and make a difference,” he says.

That is exactly what attracted VanderGiessen to the arsenic project, she says. “The immediate application and the fact that it was solving a real, worldwide engineering problem really appealed to me,” she says.

And Prabhu rejects the idea that there is anything patronising or paternalistic about the idea of developed world engineers being brought in to solve developing world problems. “I think you can never have enough people working on these problems” — though it is crucial that they work with people on the ground who understand the local context, he says. “This collision of Western capability and order, and planned, structured innovation with the sort of unstructured, improvised ability to make do with very little that you see in developing contexts — I think that’s a powerful mix.”

See below for a video about Frugal Innovation Lab: