AI is enabling farmers to obtain pesticide advice, equipment and finance. But this all depends on access to a smartphone, writes Gareth Willmer.

Cristopher Saggalla once relied on local fertiliser and pesticide traders for advice on how to treat his eight-acre farm in the village of Kulabgoor, southern India. Sometimes they would recommend pesticide doses that were too high or didn’t work, prompting a rush back to the trader and a further outlay of money to try alternatives.

But in the past eight months, things have changed. Having stumbled on a mobile application called Plantix, Saggalla now gets independent guidance tailored for his farm, where he grows rice, cotton, safflower (used for vegetable oil) and mango in the village of about 300 families near Hyderabad.

Using the free app, he takes photos of plants with pest problems, diseases or nutrient deficiencies, uploads them and immediately receives diagnostic information and treatment recommendations, as well as advice on applying fertiliser to maximise growth. And his cotton yield rose from 20 bags per acre last year to 30 bags this growing season. “From sowing to harvesting, Plantix is helping in each and every step,” he says. “I’m getting the right chemicals and saving money.”

“It is important to understand that AI holds great potential, but is not a silver bullet. It should be seen as a technology to support changes in developing countries and not the solution itself,”

The app has been downloaded by almost 10 million users globally, with about 85 per cent of them in India just two and a half years since it launched there, according to Srikanth Rupavatharam, a scientist in digital agriculture at the International Crops Research Institute for the Semi-Arid Tropics (ICRISAT) in Hyderabad.

ICRISAT collaborates on Plantix with its developer, the German agricultural tech start-up PEAT, which also has customers in Brazil, Bangladesh, Pakistan, Vietnam and Indonesia. Farmers upload 20,000 images daily and can exchange information via the Plantix community too. 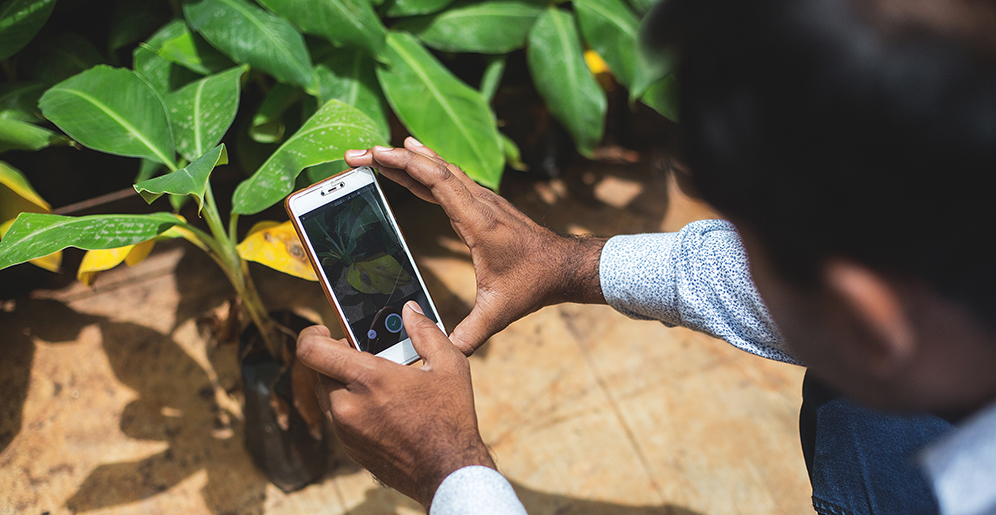 Using a mobile phone to take a picture of a sick plant before uploading it using the App. Copyright: ICRISAT-PEAT/Srikanth Rupavatharam.

Rupavatharam believes the app’s incorporation of artificial intelligence (AI) is key in its popularity surge, with its self-learning algorithm improving as it receives more data. This allows more tailored advice for smallholder farmers than the blanket information supplied by SMS-based services.

“It’s a big step forward, using targeted information and servicing only what the farmer needs,” says Rupavatharam, adding that the present capabilities of Plantix present just a “glimpse” of what AI can ultimately offer.

ICRISAT and its partners have already seen the power of Plantix for providing pest early warning systems. Images that farmers upload are geotagged with location information, so it was able to track an outbreak of the highly destructive fall armyworm that began last year and help combat it by sending push notifications to tens of thousands of farmers.

In addition, Plantix is soon to trial automated recommendations based on soil data previously gathered by the government of India.

Rupavatharam believes Plantix is being driven largely by word of mouth, aided by the fact that it’s available in 16 languages so far, including eight in India. “We’ve noticed that the user base of Plantix has significantly increased as soon as the app became available in local languages,” says Rupavatharam.

Bangalore-based CropIn takes a different tack; instead of working directly with farmers, it serves enterprises and public and private organisations that provide agricultural inputs, as well as providers of financial and insurance products.

“If we try to work directly with farmers, we still have that last-mile challenge,” says chief revenue officer Jitesh Shah. “I don’t think we would ever get to the scale where we’d be able to cater to the [many millions of] farmers in India or billion farmers around the world. Instead, if we focus on working with large institutions or government institutions, the base becomes much larger.”

Banks and insurance providers traditionally shied away from lending to farmers because of a lack of information, says Shah, but increasingly fine-grained satellite imagery combined with AI and machine learning can now provide the lender with a several-year timeline for crops on a farm, showing the yield and assessing what he terms the farmer’s “agri-worthiness”.

Another initiative in this area is the recently founded start-up Atlas AI, which is also looking at how technology can improve financial inclusion in sub-Saharan Africa. “With millions of smallholder fields that are very poorly measured right now, it’s very risky and expensive for companies and farmers to make big investments,” says co-founder David Lobell. “Improved data should really help facilitate a lot more investment in that area.”

The ability of AI to boost social inclusion has been recognised by Nigeria-based Hello Tractor too. Initially launched in 2014 as an SMS-based service dubbed the “Uber for tractors”, it enables smallholder farmers to request tractors via an app or booking agent, and operates in 10 countries in sub-Saharan Africa and Asia.

The company began using AI at the start of this year, allowing tractor owners to get information on their vehicle’s activities in a field based on its pattern of movement.

“For farmers, one of the key benefits they get from our incorporation of AI capabilities is that more and more tractor owners are now willing to deploy their tractors to communities that they otherwise wouldn’t if they had no means of tracking what their vehicle is doing,” says Priscilla Asonibare, communications lead at Hello Tractor.

Agricultural AI is being geared not just towards crops, but also sustainable livestock farming to improve animal welfare and boost food security.

After trialling a low-cost internet-of-things system called Farm AI in China that collects data on the barn environment, researchers from Queen Mary University of London and Guangxi Veterinary Research Institute in China plan to extend it into Southeast Asian countries such as Vietnam and Cambodia.

In the trial, a 5 per cent reduction was achieved in feed cost and mortality in poultry farming, with project lead Yue Gao confident this can be improved as more data is collected.

Yue says small farmers in particular will benefit from a user-friendly app. “Greater transparency of farm activities restores consumer confidence and enables smallholders to compete against larger operations,” he says.

But as always with technology, there are obstacles to overcome. Apart from language barriers, there is the perennial problem of lack of connectivity — something many are counteracting with features built into their apps.

Under its PlantVillage initiative, Pennsylvania State University has sought to combat these problems with the Nuru AI talking assistant it has built to help smallholder farmers in Africa to identify pests and diseases. Its neural network works offline too, with data uploaded once a handset reconnects to Wi-Fi.

Plantix can also be used offline to take pictures, with the information automatically uploaded later when a connection is made.

What about those farmers who don’t own a smartphone? Rupavatharam points out that others in their family or village commonly own a smartphone they can borrow. But he also concedes that the technology does not come cheap, with Plantix having a large back-end team to support the app. Apart from the funding it has from venture capital, Plantix is seeking to address this by providing AI capabilities to companies for a fee.

Whatever the solutions, it is important to keep the risks in mind, says Valeriya Zaytseva, AI consultant at the World Food Programme Innovation Accelerator, which supports entrepreneurs, start-ups and NGOs. “If the only objective is profitability, there is potential for further marginalisation of already vulnerable communities,” she says.

There is also the commonly cited fear of more automation slashing demand for manual labour. “This could have a profound impact in developing countries, where up to 80 per cent of people are engaged in the agricultural economy,” says Zaytseva. If development is unable to keep up with the speed of automation and people end up left out, she says, “it could exacerbate the very problems we are trying to solve”.

“It is important to understand that AI holds great potential, but is not a silver bullet,” she adds. “It should be seen as a technology to support changes in developing countries' food systems and not the solution itself.”