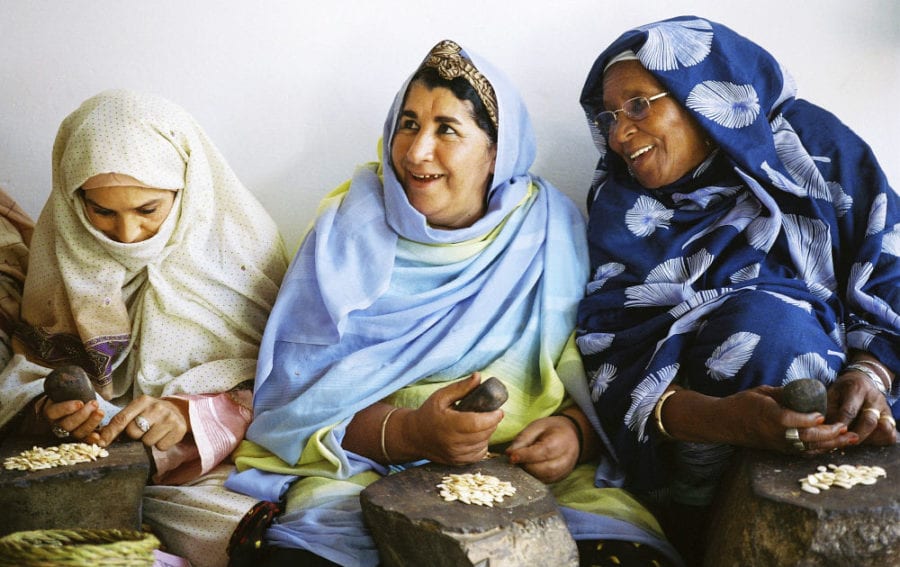 [CAIRO] For centuries, the drought-tolerant argan tree, endemic to Morocco, has acted as a ‘green curtain’ against desertification by the encroaching Sahara. Argan oil is the tree’s most valuable product. Known for its light, nutty flavour, the oil is used for salad dressing and cooking, and is also reputed to have medicinal and cosmetic properties.

But over the twentieth century Morocco lost around half its argan trees to deforestation, overgrazing and agricultural land clearances. Part of the problem was that the production of argan oil was not providing enough incentive for local people to protect the trees: the extraction process was difficult, time-consuming and required strenuous manual work, and there was little available scientific evidence of the oil’s nutritional value — meaning it did not sell well.

As a result, locals would often clear the trees to make way for more lucrative and less labour-intensive crops, such as oranges, bananas and tomatoes. But Zoubida Charrouf, a chemistry professor at Mohammed V University in Rabat, Morocco, saw strong economic and ecological potential in the tree, by partly mechanising traditional oil production processes and involving local communities.

“The idea was to transform the environmental problem into an economic opportunity, and invest in nature,” Charrouf says.

Science to the rescue

In 1986, Charrouf began researching argan oil production processes and traditional techniques. Using new technology developed in her Rabat laboratory, Charrouf mechanised part of the production process: she found that automating the pressing of the oil helped speed up operations, improve oil quality, reduce waste and prolong the oil’s shelf life, hence reducing production costs and improving income from oil sales. She also discovered molecular substances unique to the argan oil — including antioxidants and antimicrobial agents — and undertook field work, during which she consulted local oil producers to help devise an innovative plan to improve the entire production process and make it more sustainable and lucrative.

“Women in the cooperative not only learn how to read and write; it’s also a comprehensive capacity-building atmosphere where you continuously learn and practise.”

The project also aimed to establish an industry run and owned by local people, thereby encouraging them to feel responsible for protecting and sustainably managing the trees. This new industry is based on a strong scientific base and years of research. In 1998, with a four-year research grant from Canada’s International Development and Research Centre (IDRC), Charrouf started rolling out the project. She began to bring together illiterate women experienced in argan oil production by establishing cooperatives through which local people create businesses that they then own and run. She created the first cooperative in Tamanar, south-western Morocco. By 2002, this had been followed by four more cooperatives, each involving 45-60 women, in cities across the country.

Charrouf is now president of Ibn Al-Baytar, a Rabat-based association set up in 1999 with funding from national and international donors that aims to develop and improve argan oil production and business management. “IDRC decided to fund the project because it had strong potential to protect biodiversity and improve the livelihoods of poor people,” says Bruce Currie-Alder, IDRC’s regional director for the Middle East and North Africa.

The project is now supported by the government, local people, embassies and international funders, including the European Union. “Involving different stakeholders from the beginning was very important to the project’s success and sustainability,” Charrouf says. The project succeeded in developing and launching three new products:  argan oil for cosmetic use, edible oil made from toasted seeds, and an edible spread made from argan, honey and almonds.

These products sell well in shops across Morocco, generating at least €150 (around US$207) per household a month and creating a €20 million (around US$28 million) a year industry, with links to international markets and cosmetics companies. Some 5,000 women work in the cooperatives, each of them earning about US$5-8 daily, which is far more than their income before the project started. Locally, it has reaped diverse rewards.

Amina Ben Taleb, manager of a cooperative called Taitmatine, explains that the project provides both employment and education. “Women in the cooperative not only learn how to read and write; it’s also a comprehensive capacity-building atmosphere where you continuously learn and practise," she says. The project has also helped break taboos and allowed otherwise marginalised women to work, generate their own incomes and invest in their children’s education. According to Fatima, one of the women at the Taitmatine cooperative: “It has always been a taboo for rural women to leave their homes for work, but after seeing the success of the argan cooperatives, people have changed their minds and now keenly support women’s work.”

Scientifically, the project has conserved and approved many traditional practices, with some 100 related scientific papers published. And there are now other scientists, both from Morocco and further afield, involved in additional aspects of argan tree research, Charrouf says. Discussing argan oil at scientific conferences and cultural events has also attracted global interest and boosted sales across the world.

“The price of argan oil has increased from €2.5 to €25 per litre in the space of ten years,” Charrouf says. Currie-Alder adds: “I believe that a great success was improving the quality of production, such that the product became more marketable and was able to command a premium price”. And the argan cooperatives have successfully pulled in tourists keen to learn about the process and to buy oil from source.

From an ecological perspective, the period 2000 to 2010 witnessed a 100-fold increase in argan reforestation, and there are plans to plant 60,000 further hectares each year.

The project, and Charrouf herself, have received a slew of awards, including the International Slow Food Award for Biodiversity, awarded to the Tamanar Amal Cooperative in 2001, and Morocco’s Grand Prize for Invention and Research in Science and Technology, awarded to Charrouf in 2010.

In 2011, Charrouf also won the Prize of the Islamic Development Bank for Women’s Contribution to Development. “It was a great recognition of our work in the Arab region, especially Gulf countries,” Charrouf says. Charrouf inspired many women to get education and work: many of the women working in the cooperatives had never accessed good education or previously had a job. Charrouf had also broken the taboo that women should not work outside their house in a practical way — by action rather than just by talking about it.

And in April 2009, argan oil was the first African product to be certified internationally as a Protected Geographical Indication product, a labelling system established by the European Union.

”The project is sustainable when it is well-managed, together with good governance and loyal customers,” Charrouf says. The project is also sustainable because it is supported by continuous scientific research on the potential of argan oil.

A few women in each cooperative work as managers, without any interference from Charrouf, which means the idea is expanding in a less centralised and more sustainable way, says Ben Taleb.

Charrouf explains that the argan project has been replicated by cooperatives working on other Moroccan products that are organised in the same way as the argan cooperatives. “Local communities anywhere can benefit from natural resources they know and master; this is how we eradicate poverty and ensure food security,” Charrouf says.

This article is part of a series Africa’s Minds: Build a Better Future produced by SciDev.Net in association with UNESCO, with funding support from the Islamic Development Bank.