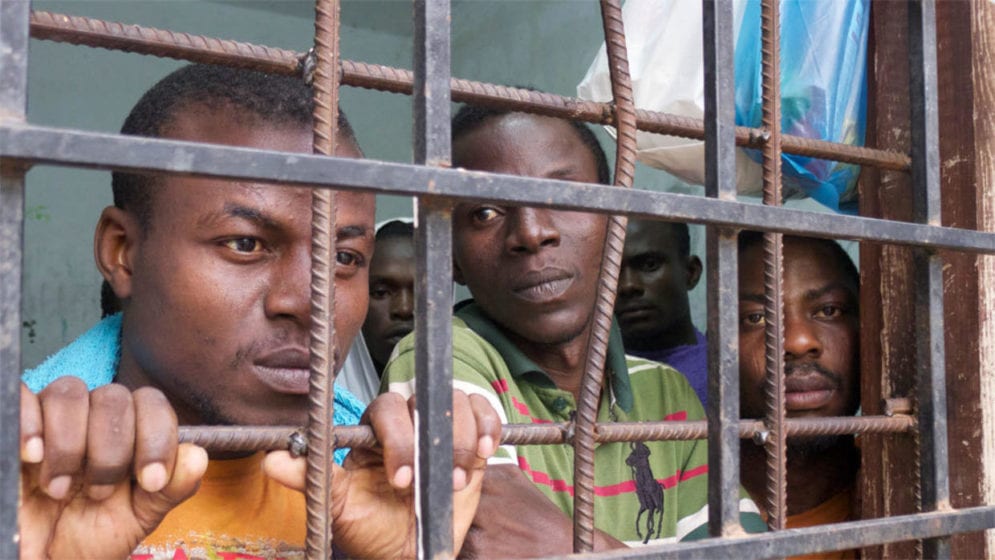 Up to 5,000 immigrants and refugees are currently held in detention centres in Libya, according to Médecins Sans Frontières. Copyright: MSF

Years of conflict in Libya has left thousands of refugees stranded in detention centres where mental health problems are rife, writes Hazem Badr.

[CAIRO] A mix of positive feelings had overwhelmed Mohammed al-Johany when he awoke to the news that Libyan leader Muammar Gaddafi had been toppled in 2011. Unfortunately, this optimism quickly came to an end.

Once waking up full of hope, al-Johany became reluctant to move the covers, preferring to spend most of the day sleeping. With eyes shut, he escapes the view of tattered clothes and shoes hanging on the walls of the nearby al-Nageela Centre, in the north-western city of Janzour, home to more than 100 immigrants and refugees.

The chaos that ensued in Libya after Gaddafi’s death provided fertile ground for the black economy to flourish. These economic activities include illegal immigration from across Africa to Europe, resulting in the detention of between 3,000 and 5,000 immigrants and refugees, according to Robert Kingu, medical coordinator of Médecins Sans Frontières (MSF) in Libya.

“We have seen some men who look barely alive, with their faces void of any expressions,”

Those immigrants live in detention centres that mostly fall well short of international standards, where depression afflicts inhabitants, and extends to nearby residents like al-Johany. Many detainees exhibit signs of social withdrawal, hyper-anxiety, acute psychosis, aggression and suicidal behaviour, says Kingu, adding: “We have seen some men who look barely alive, with their faces void of any expressions.”

A psychologist in one of Libya’s public hospitals, who declined to be named for fear of repercussions, said: “Under Gaddafi’s rule, civilians were subjected to extreme violations that hit them hard psychologically, and again they are facing the same situation, and even worse.”

Fighting is raging in the country between troops from Libya’s two rival governments, undermining a fragile ceasefire brokered earlier this month. The Tripoli-based Government of National Accord, led by Prime Minister Fayez al-Sarraj and recognised by the UN, is vying for control with the rival administration in the east of the country, allied with Libyan National Army commander Khalifa Haftar.

The psychologist says the ongoing violence and absence of state authority has led to the torture, murder and forced disappearance of many civilians, further increasing the onset of psychological disorders. During Gaddafi’s rule, he added, his unit used to receive around seven to nine patients daily — now they are admitting up to 25.

An investigative study carried out by the Danish Institute against Torture, Dignity, echoes the psychologist’s statements. The study, conducted with the help of a research and consulting centre at Benghazi University in 2013, looked at a sample of 3,000 Libyan families to assess their psychological needs. It concluded that about one third of the population was suffering from mental health problems as a result of the violations they had experienced.

The figures seem to be supported by a study conducted by the World Health Organization (WHO), and published in PLOS ONE journal. The study, to assess the effect of the Libyan conflict on the population’s mental health, concluded that the incidence of mental health disorders has more than doubled as a result of the conflict.

Elizabeth Hoff, WHO representative in Libya, told SciDev.Net: “It is likely that one in seven individuals of the population [more than one million], will need psychological health care for disorders like depression, bipolar disorder, post-traumatic stress disorder, anxiety and schizophrenia.”

Despite the increased onset of psychological disorders, there is only one specialist for every 300,000 people in Libya, and only five cities offer mental health services, according to Hoff. This represents an improvement since Gaddafi’s era, she added, with mental health services extended from Tripoli and Benghazi to Sabha, Ajdabiya and Misrata.  However, it will take years to bridge the gap in mental health services in the country, to provide an adequate number of specialists and specialised centres.

The European Union launched a three-year project in 2019, aimed at closing these gaps. The Action for Mental Health Assistance in Libya (AMAL) project — meaning “hope” in Arabic — is seeking to advance mental health services in Tripoli, Benghazi and Misrata.

But Hoff is afraid that the long and continuous conflict in Libya might undermine such efforts. The country’s only facility for drug addiction, Benghazi's Al Irada drug addiction clinic, was closed from 2014 to 2015 after it was destroyed during clashes between Libyan armed forces and militia groups.

For those held in detention centres, the only real hope of dealing with their disorders is a resolution to the conflict, enabling their return home, believes Kingu. MSF teams work in detention centres in Tripoli, Khoms, Zliten and Alzintan, where they offer public health care and mental health support.

“Those detainees, mostly from Eritrea and Somalia, have spent three years stuck in detention centres in Libya, and they are transferred from one centre to another, without any judicial review or legal proceedings, and for indefinite time,” says Kingu. “Some of them have been brutally tortured, in addition to enduring harsh detention conditions in overcrowded jails that see no sunlight and are kept closed for long periods.”

Kingu says the only solution is to get refugees back to safe asylum countries and take measures to control illegal migration. But he believes it to be a distant hope. Since December 2019, he says, more than 70 per cent of refugees and asylum seekers detained in Libya have been unable to return to their countries.