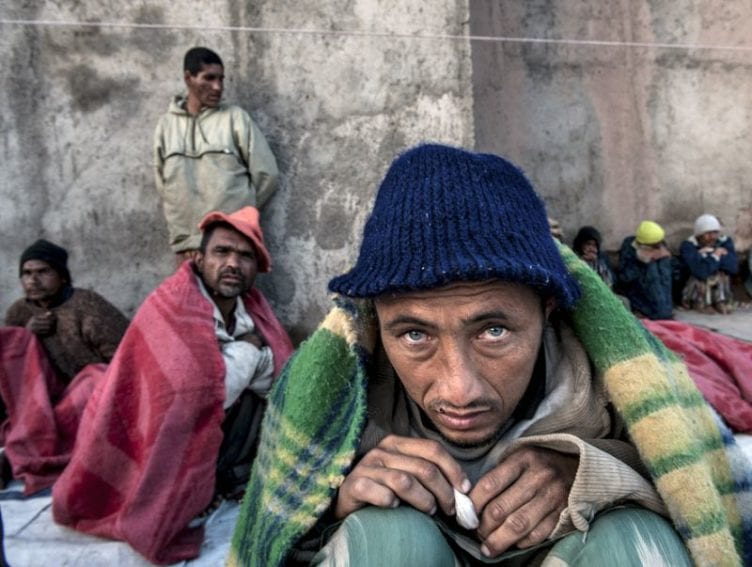 Patient huddles under a blanket outside at a treatment facility for people with mental health illness Copyright: Hossein Fatemi/Panos

Over the past week, long simmering debates about Europe’s ‘refugee crisis’ reached boiling point. Governments finally pledged to help at least some of the refugees and migrants in Europe and Middle Eastern refugee camps, and across Europe citizens have come forward with offers of help and shelter.

But one issue unlikely to receive much attention is mental health treatment for displaced people.

World Suicide Prevention Day tomorrow trains a lens on one of humanity’s most devastating, complex and stigmatised scourges. Almost a million people die by suicide each year. And depression, a condition closely linked to suicide though not its only risk factor, is the second-leading cause of disability worldwide, affecting around 400 million people. It can severely damage people’s lives and wellbeing, affecting their ability to work, build relationships, and cope with daily life, and often leading to substance abuse and physical illnesses. Despite this, few countries make tackling depression a public health priority, and globally it remains woefully underfunded.

“Mental health specialists are few and far between during emergencies, and, in the rush to provide more basic support, mental health treatment can be easily overlooked.”

The mental health of refugees is even more neglected. It’s widely acknowledged that conflict and displacement can severely harm people’s mental health, due to trauma and other stresses — unemployment, vulnerability, discrimination and disrupted family and social dynamics. [1] Research from a refugee camp in Lebanon estimated that 1-in-5 residents had mental disorders, with over eight per cent experiencing a current major depressive episode. [2]

But mental health specialists are few and far between during emergencies, and, in the rush to provide more basic support, mental health treatment can be easily overlooked.

So what can be done? One technique increasingly advocated in global health circles is to give training to non-specialist staff — nurses, midwives, doctors — in a strategy sometimes known as ‘task-sharing’. Earlier this year, the WHO and UNHCR (the UN Refugee Agency) released the mhGAP humanitarian intervention guide for the clinical management of mental, neurological and substance use conditions in humanitarian emergencies. [3] This is an adapted version of the Mental Health Gap Action Programme (mhGAP) guide, which provides evidence-based recommendations on pharmacological and psychosocial interventions for mental health in non-specialised and low-resourced healthcare settings. [4]

The new guide focuses on mental health training for primary health workers — particularly how to spot severe mental health conditions and differentiate between a ‘normal’ reaction to adversity (for example grief, anxiety and distress) and conditions such as depression or post-traumatic stress disorder that require intervention and treatment. Research by PRIME, the Programme for Improving Mental Health Care, shows these interventions work well under most circumstances but requires ongoing structured and supportive supervision at community and primary health levels. [5]

While clearly useful, this guide isn’t the only answer to the complex question of how to spot and treat mental health conditions among refugees. It neglects to address issues of stigma or cultural interpretations of mental health that might deter people from seeking help. For example, a study of Iraqi and Sudanese refugees in Australia found many of them had supernatural and religious beliefs about mental disorder symptoms and treatments. [6] And research suggests that nearly two-thirds of those with mental health issues never seek help from a professional. [7]

But compared with the neglect that has traditionally characterised humanitarian responses to mental health, the new guide is still a welcome step forward. The focus now must be on building the evidence that these tools do work in emergency settings.

Islay Mactaggart is a research fellow in disability and global health at the International Centre for Evidence in Disability, part of the London School of Hygiene & Tropical Medicine, United Kingdom. Before joining the centre in 2011, she worked for various disability and development organisations in Africa, Asia, the Caribbean and the Middle East. She can be contacted on [email protected] and is on Twitter @IslayMactaggart