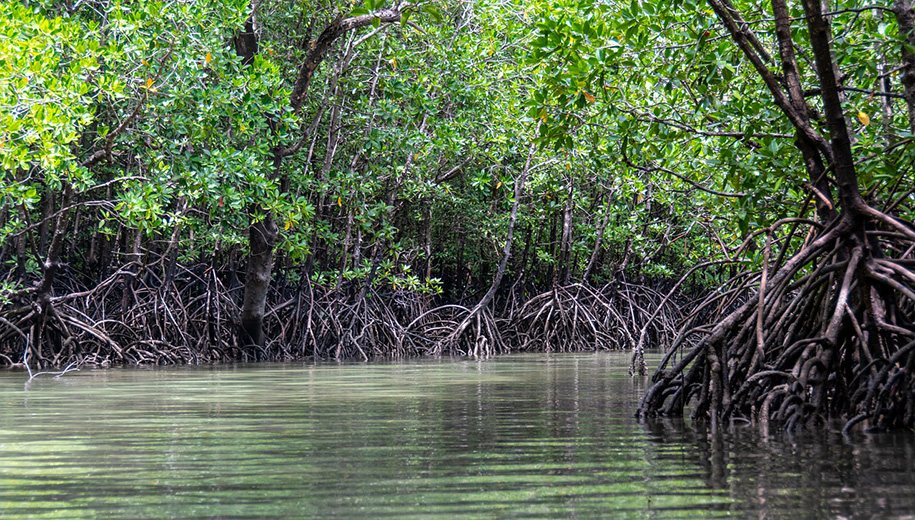 Mangroves may become overwhelmed by 2050 because of the rising sea levels. Copyright: Image by Marius from Pixabay. This image has been cropped.

[NEW YORK] An international group of researchers predicts in a new study that by 2050 the world’s mangroves will vanish if the rate of sea-level rise exceeds six millimetres per year.

Sea-level rise currently stands at 3.4 millimetres per year — against the 1.8 millimetres in the last century — with the rate projected to increase to five millimetres per year over the next few decades and double that by 2100, posing a threat to mangroves and coastal settlements, according to the UN Intergovernmental Panel on Climate Change.

“Mangroves can expand and continue accreting at current and higher rates of sea-level rise, but the probability of survival begins to decline at higher levels”

Neil Saintilan, an author of the study, published 5 June in Science, and researcher at the department of earth and environmental sciences, Macquarie University, tells SciDev.Net that “the threshold of a six millimetre sea-level rise is one that will be easily surpassed on tropical coastlines, if society does not make concerted efforts to cut carbon emissions”.

“We know that sea-level rise is inevitable due to climate change, but not much is known about how different rates of sea-level rise affect the growth of mangroves, which is an important ecosystem for the health of the earth,” he says.

Saintilan was critical of studies, including by the IPCC, suggesting that tidal wetlands can respond to very high rates of sea-level rise (10 millimetres per year or more) by building up the surface of the marsh.  “These studies are based on short-term observations that have demonstrated high rates of accretion over a few years.”

“The concern is that this was being picked up by important climate change adaptation documents like the IPCC’s special report on the oceans and cryosphere without the caveats of these studies being properly represented,” says Saintilan.

“The problem with this approach is that we don’t know whether high rates of ‘vertical accretion are sustainable over a long term, or how mangroves would respond when sea-level rise accelerates beyond what can currently be observed,” says Saintilan.

Vertical accretion is an important concept that helps soak up greenhouse gas emissions (carbon sequestration) at densities far greater than other forests, besides providing a buffer between the land and sea that helps protect people from flooding on land.

According to the study researchers, mangroves can survive by building themselves up vertically when the sea- level rise remains under five millimetres per year, which corresponds to that projected under low emissions scenarios during the 21st century.

The study looked at 78 locations and explored how mangroves responded to sea-level rise as it slowed from more than 10 millimetres a year 10,000 years ago to nearly stable conditions 4,000 years later. The storage of carbon, as mangrove forests expanded during that period, contributed to lower greenhouse gas levels.

Using sedimentary archives from when the Earth underwent deglaciation up to 10,000 years ago, the researchers estimated the probability of mangrove survival under rates of sea-level rise corresponding to low- and high-carbon emission scenarios.

When sea-level rise exceeded six millimetres per year, corresponding to what is estimated to result under high emissions scenarios for 2050, mangroves very likely (more than 90 per cent probability) stopped growing at the pace required, according to the study.

It’s critical, Saintilan believes, that emissions are controlled so that the rate of sea-level rise stays lower than what mangroves can cope with.

Co-author Erica Ashe, a scientist at the department of earth and planetary sciences, Rutgers University, New Brunswick, NJ, says that under high-emissions scenarios, rates of sea-level rise on many tropical coastlines will exceed seven millimetres per year.  “We know that mangroves are at risk for reasons aside from sea-level rise. These include clearing, overharvesting, changes in salinity due to additional freshwater, pollution, and climate change.”

Mark Grindley, country director, Fauna and Flora International Myanmar Country Programme, tells SciDev.Net that it well known that in addition to food and construction materials, mangroves provide multiple ecosystem services, sustain food webs, and protect coastal areas from erosion. “What is less clearly understood, however, is how they will respond not only to the direct impacts of climate change, but also to associated sea-level rise.”