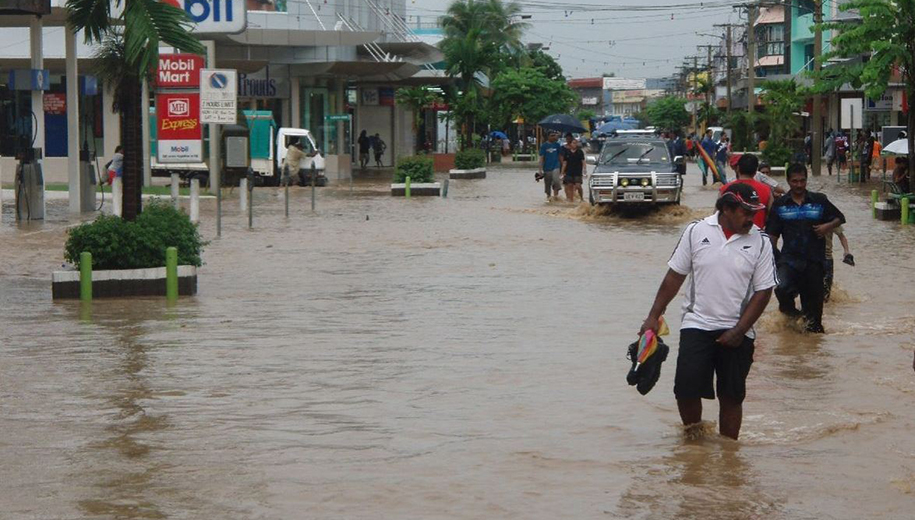 Flooding in the town of Nadi in Fiji. Pacific Islands face the threat of sea-level rise. Copyright: Cometstyles, Public Domain. This image has been cropped.

[NOUMEA] Some 40 per cent of all buildings constructed in Fiji and other Pacific Island states after 2017 stand to get inundated by 2050 as result of sea-level rise, says a new study.

About 97 per cent of the population of the Pacific islands is vulnerable to sea-level rise on account of living in proximity to the coast, says a report of the UN Intergovernmental Panel on Climate Change. In Fiji, the government lists 830 communities already exposed to climate change, with 48 of them facing urgent relocation due to ocean level variation.

“Our study is the first to ask if sea-level rise has an influence on material flows of building materials and thus, eventually on resource demands and demolition waste streams”

“Our study is the first to ask if sea-level rise has an influence on material flows of building materials and thus, eventually on resource demands and demolition waste streams,” Simon Merschroth of Institute IWAR of the Technische Universität Darmstadt and lead author of the study, tells SciDev.Net.

To estimate material losses, the team developed a novel methodology through a hybrid combination of geospatial analysis and material stock analysis, applying and evaluating to carry out the Fiji study, published last month (January) in the journal Sustainability.

“Fiji is one of the luckiest because the islands are volcanic and people can move into upper regions. Other nations, like Tuvalu or Kiribati, are only sand islands, they will face dramatic impacts,” says Andrew Jones, director of Geoscience, Energy and Maritime at the Pacific Community.

The team showed that 7,472 edifices will go under the water, leading to 900 million kilograms of material losses if nothing changes from now on.

Quantifying the amount of materials that will be under water gives policymakers a robust dataset to plan adaptation actions and any scientific contribution that helps the government to make decisions is a good thing, says Jones.

“In Fiji, like on many other Pacific islands, there is a lot of pressure on urban construction,” says Jones.

The government of Fiji plans to mobilise economic, natural and human resources to adapt to global warming. “However, it is unclear whether they can estimate the actual amount of materials and thus, the economic and environmental burdens that come with it. Our results provide a good estimate,” says Merschroth.

The study calculates the costs of relocating people from endangered buildings based on relocation of Vunidogoloa village, one of four Fijian communities forced to leave their island, at US$15,625 per house. Applied to the number of inundated rural buildings identified in the study, relocation would cost US$96.13 million in 2050.

“This estimate does not take into account the full impact of sea-level rise, Merschroth warns. “Aside from   relocating, people will lose agricultural land. Considering that over 80 per cent of inundated buildings are in the rural areas, people affected by sea-level rise will have either to purchase or be assigned new land or find different occupations in the cities.”

A study, led by the World Bank and the Global Facility for Disaster Reduction and Recovery, estimated that Fiji would need US$4.5 billion over ten years to build the country’s resilience and capacity to adapt to climate change. This includes construction of more inclusive and resilient towns and cities, but not material losses.

The Fiji government has already identified the need to build and develop climate and disaster resilience plans for urban and rural communities as a priority in its Nationally Determined Contributions following the Paris Agreement. “The country is invested in the fight against global warming, but how do they appropriate scientific results remains hard to evaluate,” says Jones.

According to the team, the same methodology could be applied for other Pacific islands. “We definitely need more and better data,” says Jones. “For some islands, we talk about sea levels rising, but we actually don’t have any baseline.”

Relocation is a grim reality for small island developing states, recognised by the UN Human Rights Committee in a recent ruling that governments cannot return people to countries where their lives might be threatened by climate change. The ruling followed New Zealand’s refusal to accept a Kiribati citizen who argued that he and his family were at risk due to sea-level rise.