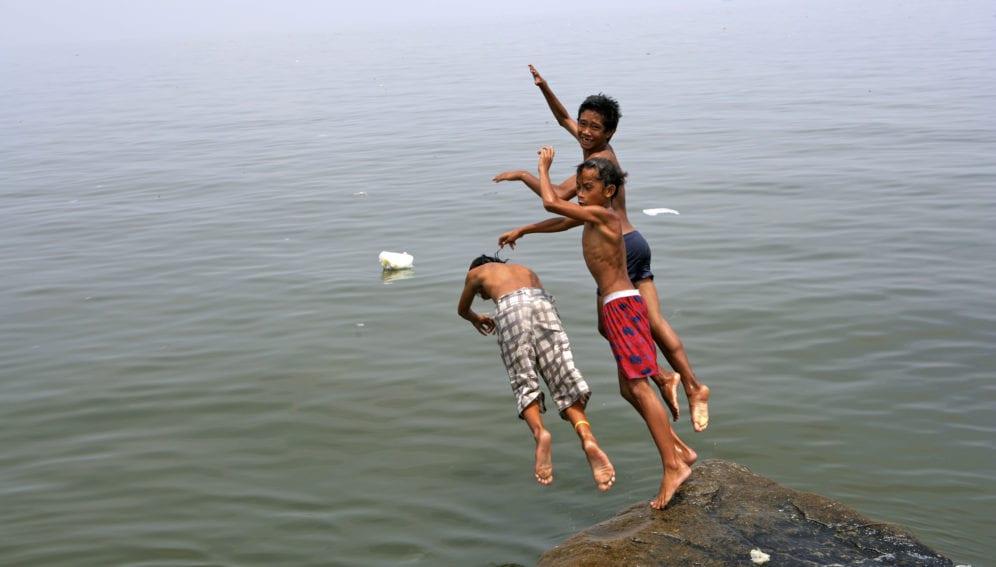 Despite being polluted, the Manila Bay provides homeless children a way to cool off from the intense heat. Copyright: Giacomo Pirozzi/Panos

[ISLAMABAD] Unless tropical countries adapt to warmer temperatures caused by climate change, they are bound to see more heatwave-related deaths, with Brazil, Colombia and the Philippines predicted to have close to 2,000 per cent increase in excess mortality by mid-century, says a new study.

Heatwaves have already been deadly this century, claiming thousands of lives. The 2003 European heatwave led to the deaths of 35,000 people while the 2010 Russian heatwave killed an unprecedented 55,736 people. In 2015, an estimated 5,000 people died from heatwaves in India and Pakistan. And in recent weeks, heat waves are sweeping through the northern hemisphere, killing dozens of people mostly in Japan and Canada.

According to the study, published last month (July) in PLoS Medicine, Colombia could be the hardest hit with 2,000 per cent more premature deaths from extreme heat for the period 2031 – 2080 compared with 1971—2020. The Philippines and Brazil follow closely. Factors raising heatwave-related mortality include population growth and increase in greenhouse gas (GhG) emissions in scenarios of no adaptation.

Tropical or sub-tropical countries are projected to be particularly vulnerable to mortality from heatwaves — defined by the study as hot outdoor temperatures or hot weather that lasts for several days beyond normal ambient temperatures.

In contrast to the tropics, Europe and the US, which fall in the temperate zone, will only see small increases in heatwave-related deaths, says the study, which is based on historical data of mean temperatures and mortality between 1984 and 2015, gleaned from 412 communities in 20 countries or regions on four continents.

Yuming Guo, lead author of the study and associate professor of environmental epidemiology and biostatistics at the school of public health and preventive medicine, Monash University, says Europe and the US fare better in mortality projections because of better heatwave management systems and health facilities.

World Health Organization (WHO) technical officer for environment and health James Creswick tells SciDev.Net that the organisation has begun working with member-countries to map out heatwave adaptation policies and plans to reduce heat-related mortality.