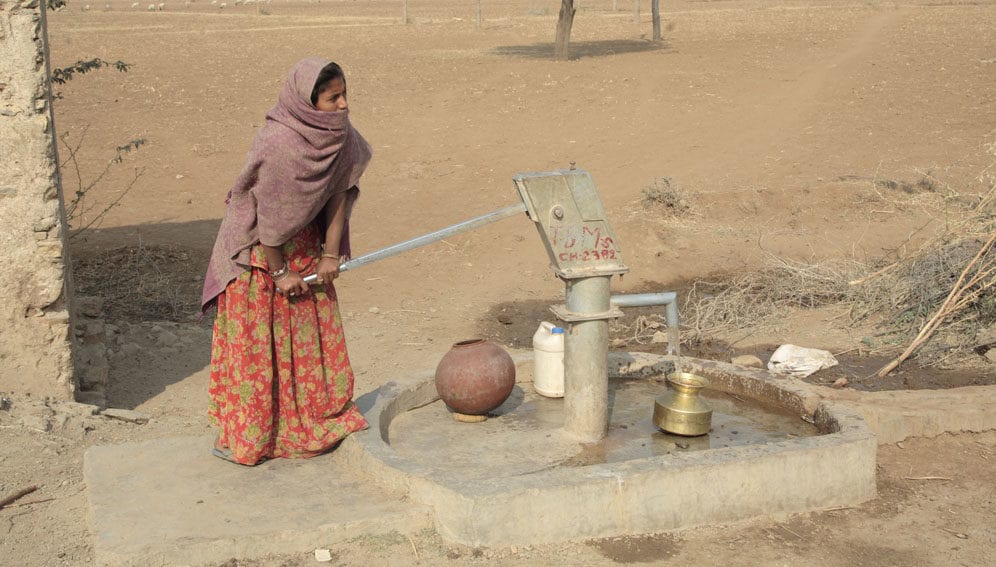 A woman from a town affected by drought tries to pump water Copyright: Robert Wallis/Panos

[MANILA] A regional forum on climate change adaptation, co-hosted by the Asian Development Bank (ADB), provided an opportunity to discuss innovative technology and financing to build resilience to disasters and climate adversities.

Participants of the 6th Asia-Pacific Climate Change Adaptation Forum (17—19 October) discussed, for example, the merits and demerits of using improved hydraulic rams or hydrams, which are devices capable of pumping water up heights without using electricity or fossil fuels.

“Many of our countries don’t have resources set aside for a disaster so they have to rely on budgetary allocations, which takes money away from existing programmes and priorities”

“With the help of a hydraulic ram, you can pump water up to 100 metres without any energy,” said Vivek Dhar Sharma, national programme assistant at the Global Environment Facility’s small grants programme in Nepal. “This kind of technology can be especially useful in highland areas,” adding that hydrams have the advantage of being able to be manufactured locally and parts, such as valves, are readily available in most countries of the region.

While solar-powered water pumps are also environment-friendly, they are comparatively costlier to install and maintain and many countries of the Asia Pacific region have to import them.

Hydrams, which are powered by the kinetic energy of flowing water, gravity and hydraulic pressure, easily justify the theme of the forum — ‘Enabling Resilience for All: Avoiding the Worst Impacts’.

Ananya Basu, principal economist at the ADB, discussed a relatively new funding model that is suitable for dealing with natural disasters. In 2016, ADB introduced contingent financing, which is organised in advance and can be spent at the sole discretion of the borrowing country up to a pre-arranged maximum amount.

“Many of our countries don’t have resources set aside for a disaster so they have to rely on budgetary allocations, which takes money away from existing programmes and priorities,” Basu told SciDev.Net. “We don’t want that and they don’t want that either. Insurance can be expensive. Our assistance fills the gap for immediate money needs.”

Contingent financing has already been approved for the small-island developing states of Palau, Tuvalu, Cook Islands, Samoa and Tonga, but Basu said other countries can avail of it. A key advantage is that funds can be disbursed within 24 hours, far shorter than the seven days it can take humanitarian groups to mobilise funds, she said.

“It’s usually in the first couple of days that you need to control indirect costs,” Basu said. “Time matters and you don’t want health epidemics spreading in the wake of a disaster,” she added.

Over 1,000 scientists, government officials, development experts and representatives from civil society as well as businesses attended the forum, the largest gathering of adaptation practitioners in the Asia Pacific region.