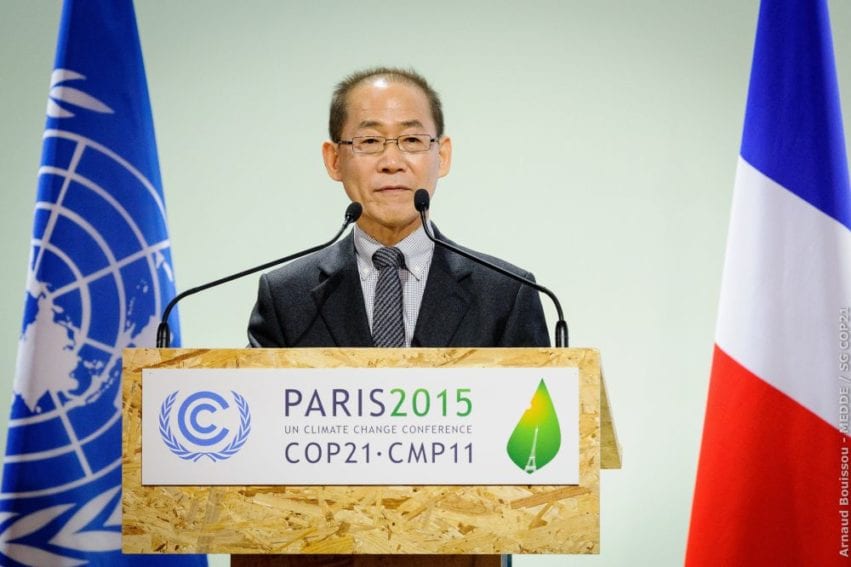 I like to think of the Intergovernmental Panel on Climate Change (IPCC) as a kindly but stern group of schoolteachers warning countries about their contribution to climate change like the parents of a wayward child.

“The planet’s behaviour is getting worse, its climate is more and more erratic,” they would warn, repeatedly. “We have evidence that your parental conduct has caused this. But if you work hard together, you can help Earth get back on track.”

“It's not my fault,” a parent would moan, complaining that the other parent had started it all a long time ago. Expensive yearly mediation meetings would ensue.

As headmasterly figures go, bespectacled Korean economist Hoesung Lee seems like a fitting choice. Speaking at a COP 21 side event on 4 December, just two months after his election as IPCC chairman, Lee appeared poised and knowledgeable, with a kindly smile and a clear message.

Scientific rigour will always be the hallmark of the IPCC.

“The IPCC needs to be as inclusive as possible,” Lee said. In the coming years, the panel “will draw from greater participation of scientists from developing countries,” he promised. Not just because it is fair or right to do so, but also because it will make the reports stronger — more comprehensive and “more relevant to policymakers at the local and regional level”, the chairman added.

Belgian climatologist Jean-Pascal van Ypersele shared similar ideas with SciDev.Net when he ran against Lee for the IPCC chairmanship in September. Only eight per cent of the authors of the IPCC’s authoritative scientific reports are based in Africa, he pointed out.

In fact, the IPCC already took steps to fix this problem well before Lee'’ election. At a February session in Kenya, the panel listed a few measures “to attract qualified experts from developing countries”. These include increasing the number of IPCC activities in developing countries and training author teams to “help ensure effective participation by all authors”.

Lee has also said that the IPCC should reach out to research institutes in developing countries when looking for authors, and to ensure that experts in those countries are aware of the possibilities of working for the IPCC, a spokesman for the panel said.

But will this be enough to help the IPCC’s work reflect science from all around the globe, not just its Northern half?

Sudanese physicist Muawia Shaddad, from the University of Khartoum, is optimistic about the panel’s efforts to widen its pool of scientists. “I think [things] will improve,” he said. Shaddad pointed out that the IPCC already housed leaders from developing countries: India’s Rajendra Pachauri was IPCC chairman from 2002 until his resignation in February, and Sudan’s Ismail El Gizouli took over from Pachauri as acting chairman until Lee’s election in October.

But none of this can address the problem that developing country academics and publications still make up only a small fraction of overall climate science output.

There is a “real tension” at play here, said Hannah Reid, a South Africa-based research associate with the International Institute for Environment and Development’s climate change group. The IPCC gets its policy clout and credibility from its stringent selection of top peer-reviewed science, Reid said. But some valuable knowledge from developing countries will not make the cut because it is unpublished, traditional knowledge or because it does not reach the right journals.

“Scientific rigour will always be the hallmark of the IPCC,” the chairman pledged at the event last week. Hopefully headmaster Lee will uphold this rigour at the same time as he aims to incorporate those quiet Southern voices.