The Red-Dead water conveyer can avoid a dead end 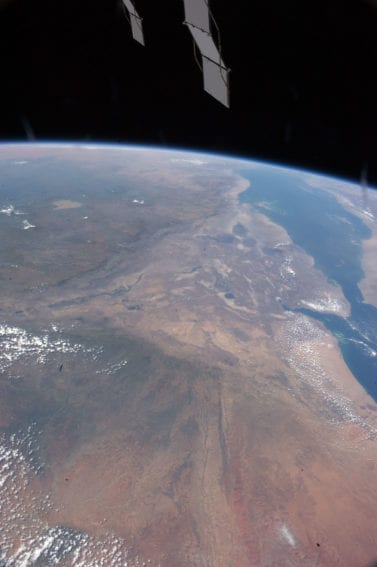 The canal would provide drinking water and prevent the Dead Sea drying up Copyright: Flickr/NASA

The Red-Dead canal could take a small step forward in light of projected environmental impacts and other constraints, says Batir Wardam.

After a delay of more than six months, the World Bank has finally released the final drafts of the feasibility and environmental assessment studies for the controversial Red Sea-Dead Sea Water Conveyance project, designed to channel some 1.2 billion cubic metres of water 180 kilometres from the Red Sea to the Dead Sea. [1]

The plan is to pump sea water from the Red Sea, pass it through a series of desalination plants, use the desalinated water for drinking, and discharge the brine to the Dead Sea, which should help restore it to its 20th century levels and prevent it from vanishing like the Aral Sea.

Although the studies recommend going ahead with the project they raise more questions than they answer, casting a shadow of uncertainty over its future.

The project was proposed in 2002 to save the Dead Sea from collapse, to quench the region's thirst by providing 850 million cubic metres of drinking water per year, and as an example of peaceful cooperation in the tense Middle East region.

But it has drawn polarised reactions. Critics warn that mixing the water from the Red Sea with the Dead Sea will have negative environmental consequences and use up energy that is already scarce and getting more expensive.

The Dead Sea is a unique ecosystem — it is the world's saltiest lake at the lowest altitude. Its surface is currently about 420 metres below sea level. Excessive use of tributary water from the Jordan and Yarmouk rivers has reduced its level by 27 metres since the 1960s, a trend exacerbated by climate change and increased evaporation.

In a typically engineering-based response, consulting firms commissioned by both Jordan and Israel proposed the Red-Dead canal as a solution. The final decision, however, would be based on economic feasibility and environmental assessment studies, according to the terms of reference for the World Bank study supported by various international donors.

The seawater modelling exercises used in the studies indicate that it will be safe to discharge a maximum of 350 million cubic metres of sea water into the Dead Sea every year, but that any additional discharge will be detrimental to the environment.

The interaction between sulphate from the Red Sea and calcium from the Dead Sea will form a white layer of gypsum on the surface of the Dead Sea, destroying the aesthetic value and ecological integrity that currently attracts tourists to the area. The mixing of waters will also cause algae to grow, which would be devastating for the mineral industries that thrive along the Dead Sea's shores.

The cap on discharge volume means the project can't meet its original objective, since any realistic restoration of the Dead Sea to its condition around four decades ago would require adding 700 million cubic meters annually — double the threshold considered safe for the environment.

Environmental safety is not the only risk. The project is also challenged by affordability. It needs to raise US$10 billion, and the only financing option is a huge private investment by a company that could sell water at a high-enough price to recoup its capital investment.

The financial feasibility study assumed that about 80 per cent of the project's costs will be provided by loans and donors, with only a fifth from countries — both difficult in this global state of austerity.

And the project will need 800 megawatts of energy to drive the desalination, pumping and operation of the facilities — a requirement that cannot be met with the current, short-term forecasts of energy supply in the region.

The studies were discussed in February with local stakeholders at public meetings that brought together academics, civil society, governmental institutions and media in Israel, Jordan and Palestine.

In Jordan participants raised several technical concerns such as the cost of drinking water, seismological threats and impacts on Red Sea ecology. [2] The meeting in Ramallah raised the need for Palestinian rights to water resources and access to the Dead Sea. In Israel, the Ministry of Environmental Protection called for caution in implementing the project because of its potential impacts on the Dead Sea. [3]

The Jordanian government, the project's strongest proponent, sees it as a strategic solution to the threat of water shortages. Jordan has one of the world's lowest per capita annual share of water.

In light of concerns raised at the public meetings, the Jordanian government called for a pilot project that would discharge only 350 million cubic metres to the Dead Sea, provide 250 million cubic metres of drinking water each year, and provide evidence of potential environmental impacts. The Jordanian government says that if the regional project is not approved, it will have no option but to take it forward alone.

The final decision will be taken by the three countries later this month and, if approved, will most likely be announced during the regional meeting of the World Economic Forum in Jordan in May.

The project's prospects are not good. But the urgent need for drinking water may prevail over Dead Sea restoration.

The three countries should consider taking the project forward with one small step. The suggested pilot project could be the best option — if provisions are made to mitigate environmental impacts and mobilise enough financial resources for implementation.

Batir Wardam is a Jordanian environmental management and communication specialist. He is currently the manager of the national project to prepare Jordan's 3rd National Communication on Climate Change. Wardam can be contacted at [email protected].

This article was updated on 2 April 2013. A previous version of the article stated that the project needs to raise US$110 billion. This statement was incorrect.