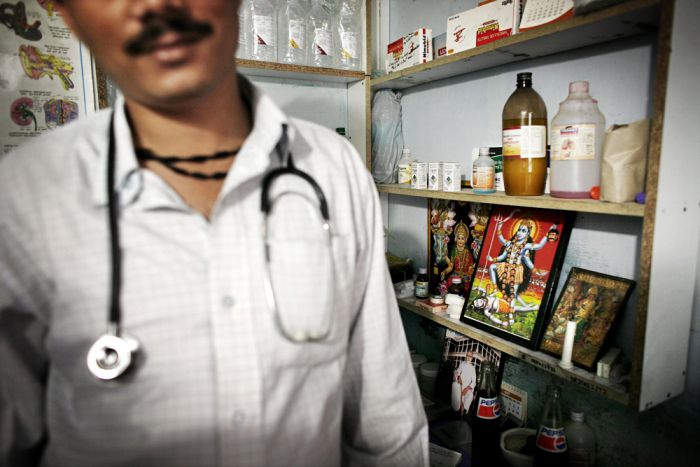 They should be trained and their impact evaluated to see if it improves care for poor people, says Jishnu Das.

Most of us would agree that when it comes to healthcare providers, some training is better than none. Yet even this seemingly innocuous statement is highly contentious in India, where training primary care providers who lack formal medical qualifications is anathema to the professional medical classes.

But the professionals are wrong. Training informal providers (IPs) could vastly improve the quality of care for millions of rural Indians and there is no evidence that it would make matters worse.

It is time to implement such training and critically evaluate its impact, to guide Indian states in deciding whether to treat these providers as an obstacle or an opportunity.

‘Teaching burglars how to steal’

But first, some background.

Most primary healthcare in India is private, accounting for more than 70 per cent of total household spending and doctor visits. [1,2] But the private sector has remained a bit of a mystery: the large household surveys on which such statistics are based do not ask who the private providers are. Recently, other surveys have revealed that, at least in rural areas, they are largely staffed by people with no formal medical qualifications and dubious legal standing.

“In essence, most of India’s medical care is provided by people who (legally) don’t exist.”

In rural Madhya Pradesh for instance, 70 per cent of healthcare providers working in the private sector lack any formal training — but they are the first point of contact for 77 per cent of all doctor visits. [3] Similar numbers are found in states such as West Bengal, Rajasthan, Andhra Pradesh and Uttarakhand. [4,5]

In essence, most of India’s medical care is provided by people who (legally) don’t exist.

These basic facts garner two kinds of reactions. One group believes that allowing IPs to practise amounts to dereliction of the state’s fundamental duty to provide healthcare. They argue that these providers should be arrested and that it is the public sector’s duty to increase the availability of qualified staff and guarantee quality of care.

According to this camp, all IPs are quacks, quackery is crookery and training quacks is “teaching burglars how to steal more effectively”. As the chairman of the Andhra Pradesh Medical Council argued: “They are already violating rules. [After the training,] they will violate them even more.”

There is a counterpoint though, which recognises that ramping up the size of public sector healthcare and improving governance to increase quality is a long slog. Meanwhile, training providers who have garnered the trust and respect of local people is valuable because it complements those long-term efforts.

These two groups agree that IPs are uniquely responsible for many of the problems with the healthcare system, from misdiagnosis to antimicrobial resistance. However, Group 2 believes these problems can be alleviated through training. Group 1 believes that training will make the situation worse.

Much of this debate takes place in an empirical vacuum: when my colleagues  and I tried to understand the reality on the ground, we could not find high-quality studies that conclusively evaluated the objective quality of care in the informal sector compared with formal clinics in the same area.

So, over five years, we worked with a multidisciplinary team to deploy ‘standardized patients’ among random samples of providers — both public sector and informal — in rural Madhya Pradesh. [6] These patients were recruited from local communities and trained to present the same condition to all providers exactly as a real patient would, both in terms of the biomedical symptoms and behaviour. This method is widely regarded as the ‘gold standard’ when measuring healthcare quality.

Our research demonstrates two simple facts: that there are severe deficits in care quality across the board, and that IPs are the dominant source of care in rural India — the only source in some cases — because there isn’t a better, affordable option.

For example, only five per cent of the villages in our sample had a fully qualified doctor, compared with an average of 1.8 IPs within each village and 3.6 just outside in the markets on the main roads.

Compared with interactions in the public sector, IPs spend more time with patients, and are more likely to adhere to checklists of medical history and national patient management guidelines. They are more likely to provide a diagnosis and are equally likely to correctly manage a case.

Unsurprisingly, fully qualified doctors in the private sector are more likely than IPs to correctly manage patients — but, worryingly, they are also more likely to use unnecessary antibiotics. And the highest rate of unnecessary antibiotic use, at 49 per cent, was among the fully qualified providers in the public sector. So the perceived wisdom that widespread antibiotic resistance in India is driven by the irresponsible behaviour of IPs is incorrect.

This reality on the ground is more startling than even those who support IP training are willing to cede.

Part of this reflects the abysmal training and practices of many supposedly qualified doctors in India. But part of it is also because IPs are seldom people who just closed the vegetable shop and opened a clinic. As we show in forthcoming research, 91 per cent have received training, either by working in a clinic or as a pharmacist, or through some sort of observation in clinics and hospitals. This is a model of practical training, rather than formal medical education.

Whatever the reasons, the stark reality is that IPs are the backbone of India’s primary healthcare system. Our research clearly shows that their services are comparable with or better than alternatives in rural areas. Training can increase their knowledge base and, by extension, the quality of care available for millions of poor Indians.

I understand the anxiety around this: people are nervous about heading down an uncertain path that opens up a host of regulatory and conceptual problems. There is also the issue of challenging the authority of medical doctors, and the notion, enshrined in public health psyche, that qualifications are a proxy for quality.

And critical questions remain. What if training grants ‘official’ legitimacy to IPs, empowering them to give more antibiotics and try out dangerous procedures? And would training them take pressure off the state to provide decent public healthcare to poor people?

No one knows. We have never even tried to systematically evaluate the costs and benefits of training IPs. But given the evidence of their role, this is now a critical task.

Jishnu Das is a lead economist in the development research group at the World Bank and a senior visiting fellow at the Centre for Policy Research, New Delhi, India. He can be contacted at jdas1@worldbank.org