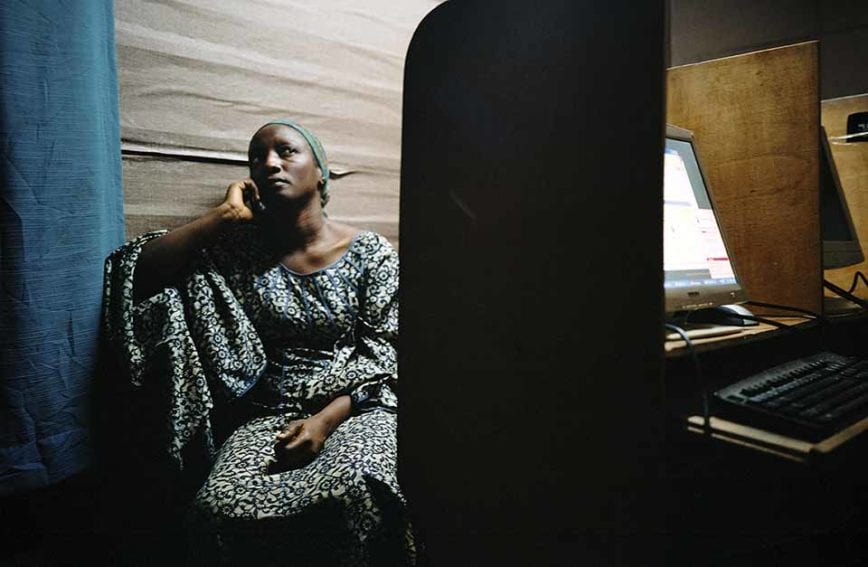 Kady sits in the internet cafe she started in Abidjan after it has closed in the evening. Copyright: Panos

Half the world will be online by the end of 2018, according to our estimates at the Web Foundation. This is an incredible milestone — but it also means that nearly four billion people across the globe are still offline, shut out from the digital revolution and the opportunities that many take for granted.

This digital divide mirrors and exacerbates inequalities that exist offline. So it’s no surprise that the majority of unconnected people are women and girls.

Connecting these women and girls is critical to closing the digital divide, and essential for boosting economic growth. Internet access allows women to gain a voice, seek information, or expand their networks beyond existing social boundaries.

Yet, African governments are failing to spend funds collected specifically to connect the unconnected.

The latest research by the Web Foundation, where I work to advocate digital equality, shows that across Africa, an estimated US$408 million of public funds earmarked to close the digital divide is sitting unused.

The amount could bring six million women online, or provide digital skills training to 16 million women and girls. Such training is critical for empowering them to use technology to make their voices heard, and to shift political and social discourse as a result.

The failure to prioritise use of these funds is a lost opportunity. Investing just half of the money in projects that specifically target women’s internet access and use would make it possible to close Africa’s gender digital divide in 12 years, half the time it would take under the current trajectory.

Just 22 per cent of Africa’s citizens are online, and the continent has the widest gender gap in connectivity.

This divide doesn’t stop at connectivity. Technology is not gender neutral — the sector remains dominated by men, resulting in many of the technologies and policies deployed by governments being inherently biased towards men. Business models designed by men often favour men, with data packages marketed specifically to men, who tend to be the higher income earners.

The unused funds — called Universal Service and Access Funds (USAFs) — are public funds that aim to overcome this inherent commercial bias. They also aim to enable increased internet access for populations, such as women and poor or rural people, who are less likely to come online through market forces alone.

Adopting them is voluntary, but once in place they are financed by often mandatory contributions from telecoms companies.

The funds are designed to implement universal access and national ICT policies in the countries where they are collected. Although many of those countries do a reasonable job of adhering to the strategic goals outlined in their policies, many of the policies themselves ignore the digital gender gap.

Most African countries have USAFs in place. But according to our report — the first to assess USAF performance — at the end of the last reporting year just four countries had spent all of the funds collected: Côte d’Ivoire, Nigeria, Rwanda and Uganda.

This may sound promising but limited transparency makes it difficult to confirm that these funds were in fact put towards digital access programmes, or to measure how effective the efforts were.

None of the USAFs had clear disbursement targets or programmes dedicated to connecting women and girls. Yet these — and targets to measure their success — are essential to ensure the offline gender gap isn’t simply repeated in the online world.

If market forces alone are not enough to close the gender gap in internet access, what should governments do?
One step is to direct at least half of the funds collected into projects targeting women’s internet access and use. A great example of this is GIFEC (the Ghana Investment Fund for Electronic Communications), which has invested in Digital For Inclusion, a programme ensuring that 60 per cent of local people selling their services are women.

Another step is to include women in the design of projects and policies that benefit them. Current participatory design practices are not necessarily gender responsive, and so tend not to include women’s perspectives.

Increasing the transparency of fund financing, disbursements and operations can also make a difference. Our report lists projects that have been financed through the USAF, but it is difficult to determine why they were selected, who designed them, and who the intended beneficiaries were. For USAFs to have a meaningful impact, they must operate using non-discriminatory rules.

Our interviews have revealed three commonly held beliefs that lead people working with USAF funds to dismiss the importance of gender-responsive project design and management. The first is that the government has already taken steps to address gender equality, by adopting a national gender policy for example.

The second is that USAFs are already investing in projects to reduce the digital divide and these should be sufficient to meet the unique needs of women. And third, people often think that gender discrimination in their country isn’t as bad as it is in others.

The funds to close the digital divide are available, and the steps we must take are clear. Bringing billions more African women online carries tremendous possibilities — new businesses will be created, access to healthcare and valuable health information will improve, and citizens will be better informed and empowered. We can’t afford not to act.

Nanjira Sambuli is Digital Equality Advocacy Manager at the Web Foundation. She can be contacted at nanjira.sambuli@webfoundation.org