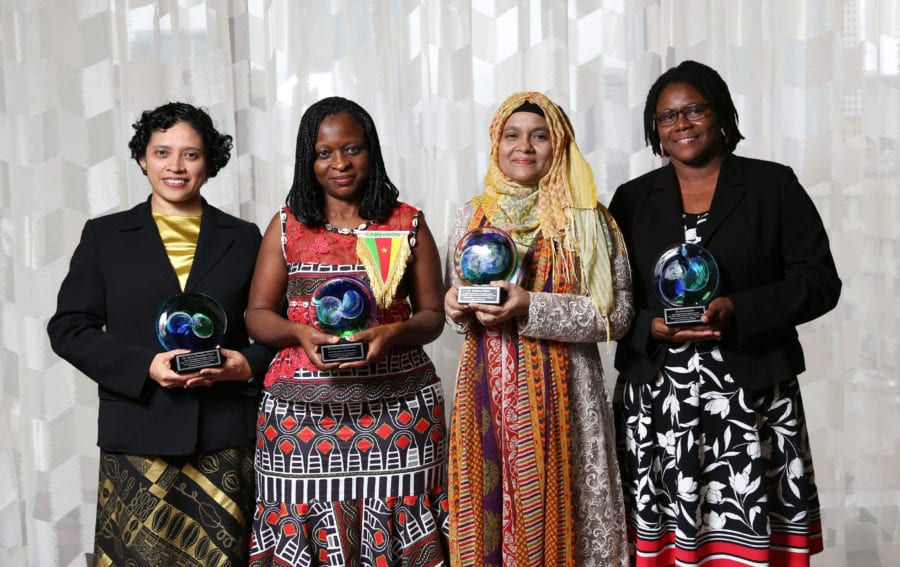 Five women scientists from the developing world have been awarded an international prize for research that promotes socio-economic development and a better quality of life.

The awards — a partnership between the Elsevier Foundation and the Organization for Women in Science for the Developing World (OWSD) — were presented at the annual meeting of the American Association for the Advancement of Science (AAAS), which took place in Austin, Texas this month (15-19 February).

Hasibun Naher from Bangladesh, Germaine Djuidje Kenmoe from Cameroon, Silvia González Pérez from Ecuador, Dawn Iona Fox from Guyana and Witri Wahyu Lestari from Indonesia each received a US$5,000 cash prize for their work.

“If they have the opportunities and support, women in the developing world can become leaders in their field”

Naher was recognised for her work on computer simulation of tsunamis; Djuidje Kenmoe for the study of molecular friction-and-wear for improving energy efficiency; González Pérez for molecular modelling of new sustainable materials; Fox for work on converting waste into materials with added value; and Lestari for her research on the synthesis of metal-organic frameworks for various applications in medicine or environmental protection.

OWSD president, Jennifer Thomson, says the women distinguished with the award “show that, if they have the opportunities and support, women in the developing world can become leaders in their fields”.

Not all women have the opportunity to do so. According to 2015 data from UNESCO, women in much of the world face social, political and economic barriers to dedicating their working life to science — but those who live in developing countries can face additional, different obstacles.

Poverty, for instance, is strongly linked with unequal access to secondary education, and this may keep women from obtaining a university degree in almost in any field.

Another obstacle is related to culture and traditions that maintain inequalities between men and women. According to a UNESCO report from 2017, parents with more traditional beliefs about gender roles tend to discourage their daughters from pursuing a scientific career.

“To become a scientist in a developing country, a woman must be creative and committed”, Djuidje Kenmoe, the Cameroonian OWSD-Elsevier prize winner, told SciDev.Net. This, she added, is because in addition to academic work, she will often be “tied to social and familiar responsibilities and duties”.

This highlights the importance of a prize that is specific to women scientists who live and work in developing countries, argues Hortensia Moreno, a researcher from the National Autonomous University of Mexico and a specialist in gender studies.

According to Moreno, this prize highlights the need to promote women scientists’ presence in scientific fields they may have been prevented from entering — both in formal ways, for example through restrictions on studying or entering into academic life, and in symbolic ways, through “myths, stereotypes and narratives that feed the false notion that women do not have an aptitude for science”.

Djuidje Kenmoe believes that science and education can promote change in her community. This is why part of her work is about convincing families that they “should offer a girl the same opportunities they offer to a boy. Girls ought to know that when they have a job they can be financially independent, and have an important power in family decisions”.

According to Moreno, prizes also represent the interests of the organisations that grant them. They can “legitimize economic power”, but also have value as “they allow even a minimal distribution of wealth”.

Elsevier has faced strong criticism from the scientific communities in several European countries, who pay large sums to publish and access articles in journals owned by the company. At the end of last year, 200 German academic institutions cancelled their subscriptions to the publishing house in a push for national negotiation that offers fairer payments for their publications and open access for the institutions that produce them.

This piece was amended on 27th February, 2018, to clarify that the criticism was directed at Elsevier, not the Elsevier Foundation.