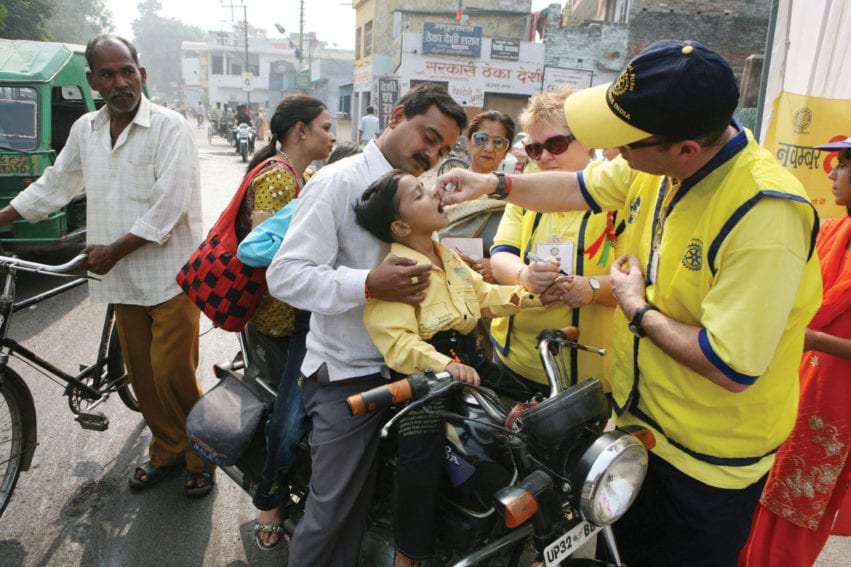 The two improvements could bring about longer lasting immunity and reduce the number of people infected, say researchers at Imperial College London and the Christian Medical College in Vellore, India.

Advances are badly needed as outbreaks are now emerging in previously polio-free countries in Asia, Africa and the Middle East and the WHO has declared it an international public-health emergency — calling for mandatory vaccinations for travellers to or from Cameroon, Pakistan and Syria.

Most vaccination campaigns only use three or more doses of oral polio vaccine (OPV) to provide protection against the disease, but an additional dose of injected inactivated polio vaccine (IPV) could be key to providing stronger immunity, according to a study published in The Lancet (11 July).

“We found that an extra dose of IPV given to children previously vaccinated with OPV resulted in a substantial boost in their immunity to infection with poliovirus,” says one of the authors, Nick Grassly, from Imperial College London.

“This suggested that IPV could be used in campaigns (with or without OPV) to help eliminate transmission of poliovirus by individuals previously vaccinated with OPV whose immunity may have waned.”

Back to the future

IPV was the first vaccine against polio, first developed by Jonas Salk in 1955 and was used extensively in the United States. It fell out of favour in the 1960s once OPV was developed. OPV has been used in mass campaigns, particularly in the developing world, as it is quicker, easier and cheaper to administer. But in the United States, IPV is still recommended.

In The Lancet study, researchers studied 450 children from an urban area of Vellore, giving them a dose of OPV vaccine to simulate reinfection with the virus. They found that children who had received IPV in addition to OPV had fewer polio viruses in their stool compared with children who did not receive IPV.

The finding supports a growing body of evidence that IPV has an important role to play in eradication efforts. The WHO recommends countries using only OPV should introduce at least one dose of IPV into routine immunisation schedules by the end of 2015.

“A polio-free world by 2018 is certainly possible.”

But Sona Bari, spokesperson for the WHO, warns of several barriers to implementing IPV on a wide scale — mainly because of the need to inject it.

“Most countries where polio survives do not have the health infrastructure necessary to deliver IPV. There are not enough trained health workers, or the cleanliness needed for a needle based injection, and there is the issue of cost. If IPV has to be introduced in [routine] immunisation it has got to be financially sustainable,” she tells SciDev.Net.

Bari also notes there are steps underway to overcome these significant barriers. A joint statement by Unicef, the Global Polio Eradication Initiative (GPEI) and the GAVI Alliance has announced a price cut to make IPV more accessible. The vaccine will now be available to GAVI-supported countries for €0.75 per dose (approximately US$1.00) in ten-dose vials.

In the second study, which recommended faster vaccination in outbreaks, published in Proceedings of the National Academy of Sciences (7 July), researchers from the same group and partners from the GPEI used a mathematical model to analyse the transmission of polio in two major 2010 outbreaks, in Tajikistan and the Republic of Congo.

The results showed unvaccinated older children and adults contributed significantly to transmission in the Republic of Congo, but only minimally in Tajikistan. This could be due to differences in standards of sanitation and hygiene between the two countries, the researchers say.
The findings may help inform the GPEI, which is considering expanding its target age group for OPV — currently restricted to children under five — to improve the impact of vaccinations.

“Vaccinating older age groups is important when cases are reported in these age groups,” says Grassly. “However, in the absence of adult cases our results suggest extending the age groups targeted by vaccination campaigns is unlikely to offer significant benefits.”

The study instead showed that, during outbreaks, even small gains in the speed of vaccination were important.

The researchers found, for example, that had the immunisation response in Tajikistan happened two weeks earlier, an additional 130 cases (21 per cent of the total outbreak) could have been prevented.

“In light of our results we are interested in improving methods to allow a faster outbreak response,” lead researcher Isobel Blake, from Imperial College London, tells SciDev.Net.

Emergency due to new outbreaks

The WHO declared in May the spread of polio an international public health emergency due to outbreaks in at least ten countries in Asia, Africa and the Middle East. It is calling for mandatory vaccinations for travellers to or from Cameroon, Pakistan and Syria.

Political issues that make it hard to access children who need vaccination and scared local populations, especially along the Afghanistan-Pakistan border, are an additional challenge.

“The emphasis on polio, to the neglect of other health services, has long fuelled beliefs that polio immunization is an external initiative operating for outsiders’ benefit,” writes Zulfiqar Ahmed Bhutta, director of the Center of Excellence in Women and Child Health at the Aga Khan University in Karachi, Pakistan, in an opinion piece in Nature this week (17 July). “Anti-Western sentiment has led to repeated attacks on polio-eradication workers, volunteers and security personnel; more than 80 have been killed since December 2012.”

He adds that the WHO’s “hastily imposed travel regulations will only give credence to claims that polio eradication is part of a foreign agenda.”

Instead, he calls for polio vaccines to be part of a package of boosting routine immunisation and health services targeted at displaced and marginalised communities, instead of international travellers.

“We cannot be naive to the huge challenges that remain,” says Bari. “They’re very specific to political contexts, so what the issues are in north western Pakistan are issues we’ve never faced before: issues that the whole development community is grappling with. How do we deal with these conflicts that are extremely complex political and involve non-state actors?”