By: Vlad Sokhin and Jon Spaull

As the world’s governments meet in Paris to negotiate a global agreement to stem the tide of climate change, nowhere will the outcome of the talks be more anticipated than on the other side of the world in a string of islands across the Pacific Ocean. Some of these small island states face an existential threat — if sea levels continue to rise, within a hundred years their lands may literally disappear beneath the waves.

As part of a long-term project investigating the effects of climate change on communities living in and around the Pacific, from Alaska to New Zealand, the photographer Vlad Sokhin travelled to these islands of the Central and South Pacific to document life on the front line of climate change. 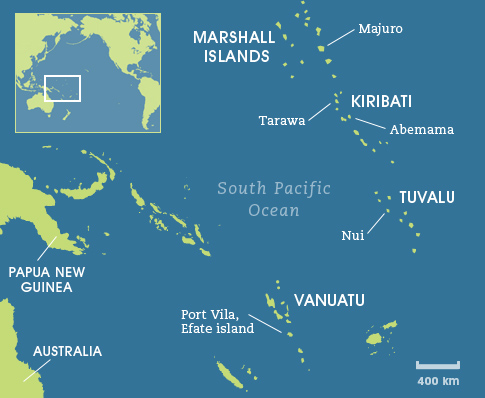 A map of the South Pacific Islands: Kiribati,Marshall, Vanuatu

These states are among the most vulnerable in the world to climate change. Much of the land on these islands is just a few metres above sea level, so they are especially vulnerable to small rises.

The Intergovernmental Panel on Climate Change (IPCC), a UN advisory body, estimates that between 1993 and 2010  the average rate of increase in global sea levels was roughly three millimetres per year. [1] It predicts that it is virtually certain that global sea levels will continue to rise beyond the twenty-first century. Sea levels, though, as the IPCC points out, do not rise “like filling a bath tub with water”. Instead, shifting surface winds, the expansion of warming ocean water, melting ice and local tectonic activity all mean that sea level rises vary across the globe. In the western Pacific, it is estimated that sea levels grew by about three times the average rate between 1993 and 2012. [1]

Vlad Sokhin visited some of the most threatened Pacific island states.

Kiribati is one of the most vulnerable of all the Pacific states to climate change. Most of the population live on Tarawa Island, an atoll with a population density similar to Hong Kong. A high birth rate and internal migration from other outlying islands are putting strain on Tarawa’s resources. The government is already preparing for a mass migration off the islands. It has bought land in Fiji to provide additional space to grow crops, and for use as a future resettlement destination.

Kiribati’s president, Anote Tong, predicts that Kiribati could be uninhabitable within 30 to 60 years, telling British newspaper The Telegraph that “our people will have to move as the tides have reached our homes and villages”. The government has even speculated about building artificial islands to live on.

It has been predicted that a sea level rise of 20-40 centimetres over the next 100 years will make Tuvalu uninhabitable. Last year, the prime minister of Tuvalu told the UN Climate Change Conference in Lima, Peru: “No national leader in the history of humanity has ever faced this question: ‘Will we survive or will we disappear under the sea?’”

The low-lying nature of the Pacific islands makes them especially vulnerable to extreme winds, which the IPCC predicts will increase with climate change. In March, Cyclone Pam devastated many of the islands in the Pacific. Although the cyclone did not pass directly over Tuvalu, the resulting surges still destroyed many of its houses. The cyclone caused damage worth nearly a third of the country’s GDP (gross domestic product). Huge tidal waves sliced one island in half, submerging an islet and destroying crops and houses. On the island of Nui, 71 families — or 40 per cent of the population — were displaced.

In 2013, heavy waves breached the city walls of the capital Majuro. The ‘King Tides’ — the highest of the year — are getting higher in the Pacific. These occur when the alignment of the earth, moon and sun combine to produce extreme tidal effects. They cause erosion and contaminate the ground with salt water, killing trees and crops, and spoil drinking water.

Most of Vanuatu’s islands are mountainous, with unstable soils and little permanent fresh water. Cyclone Pam hit Vanuatu with winds of up to 270 kilometres per hour, causing widespread damage. It is thought to be Vanuatu’s worst natural disaster. On some islands, up to 90 per cent of houses were damaged.

Many negotiators at Paris hope to agree a target of keeping the average global temperature rise to no more than two degrees Celsius. The Alliance of Small Island States, to which the Pacific islands in these photos belong, believe this does not go far enough for the survival of their countries, stating: “A long-term temperature goal of ‘well below 1.5 degrees’ must be reflected in the Paris Agreement, along with an indicative pathway for achieving it.”

Marshall Islands foreign minister Tony de Brum fears that even the goal of two degrees will not be met and believes this will be catastrophic for his island: “Anything over two degrees is the end of our country; we go underwater when that happens.”

TB epidemic ‘could flare in near future’

The road to climate justice

Can COP26 live up to climate finance hype?

Q&A: Young people know how to work together