The ancient art of silk production, or sericulture, was first introduced to Kenya in 1904. Because of its high setup costs and specialist techniques, it remained an elite business until 40 years ago, when the Kenyan and Japanese governments set up the National Sericulture Project to promote silkworm rearing in Kenya. 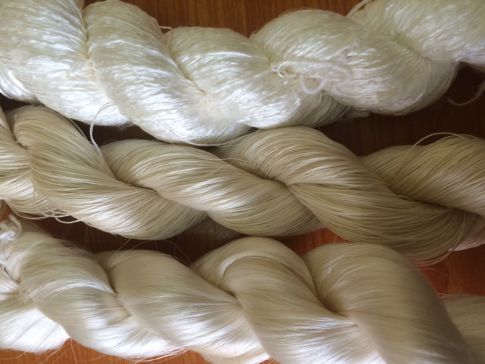 The silk threads produced by silkworms are soft, lightweight and very flexible

Traditionally, Kenyan farmers have grown tea, coffee and maize. But new diseases and erratic weather are increasingly reducing yields. Many farmers are unsure how to respond effectively.

Silk farming offers one solution. Sericulture is better suited to erratic weather because mulberry trees, whose leaves the silkworms eat, are resilient and require little water. And silkworm rearing is a safer investment because it provides a steady monthly income. 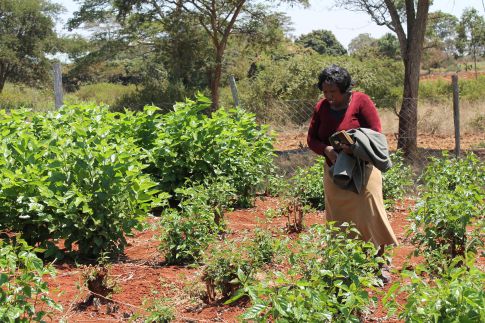 Silk is one of the oldest fibres known to humans. It is produced in Brazil, China, India, Japan, Thailand and Vietnam among others. Globally, 178,000 tonnes of silk were produced in 2014, according to intergovernmental organisation the International Sericultural Commission. According to the National Sericulture Research Centre and JICA, this trade is worth US$6 billion to 8 billion. However, they found that in recent years, the advent of manmade fibres such as nylon, and rising staff costs in this labour-intensive sector have led to a dip in silk production in Kenya. Despite this, silk remains popular in high-end markets and with people who prefer natural fibres. 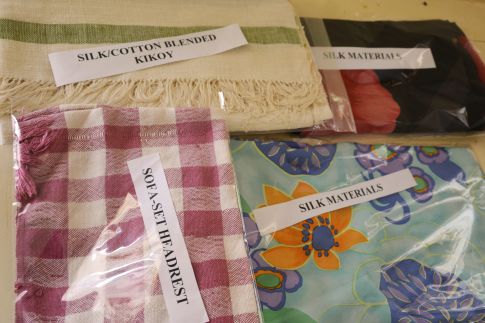 Silk fabrics. Some are blended with cotton

Despite decades of effort in Kenya, however, the production and sale of silk remain limited. Economists and scientists recognise the country’s potential, but believe the market won’t take off without strong scientific support.

To provide this, the Kenyan government, assisted by government development body the Japan International Cooperation Agency (JICA), established a National Sericulture Research Centre this year at the Kenya Agricultural & Livestock Research Organization (KALRO) to coordinate research and outreach activities. To encourage more farmers to get involved in sericulture, KALRO has opened ten centres around the country that distribute silkworm eggs, mulberry seedlings and silkworm cocoons. 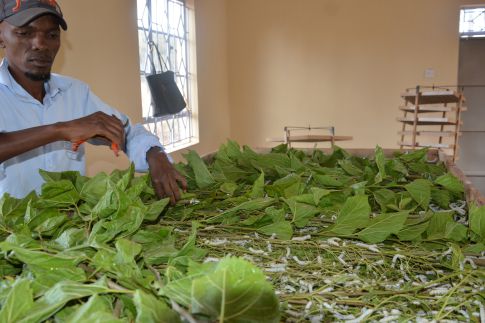 Silkworms are the larval form of the silkworm moth (Bombyx mori). After emerging from an egg, each caterpillar grows for 26 to 30 days, before wrapping itself in a cocoon made of silk ready to develop into an adult moth. To extract the fibres, the cocoons are boiled to kill the larvae and soften the silk strings. Each cocoon produces a thread that is more than a kilometre long.

Currently, about 600 farmers involved in the Kenyan project are growing mulberry trees and about 50 are rearing silkworms. Researchers hope to get more farmers involved. 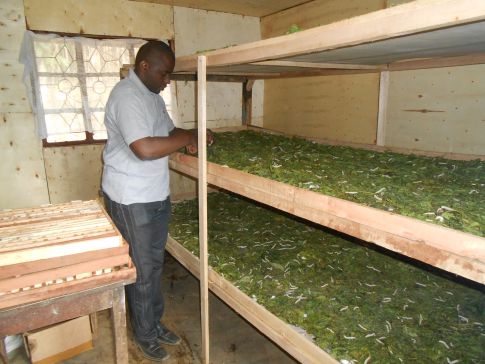 Timothy Mureithi in his silkworm farm in Meru, central Kenya

Monica Njeri is a silk farmer who produces cocoons for Kenya-based research organisation the International Centre of Insect Physiology and Ecology, as part of the governmental effort to boost production and eventually raw silk export export. Each month, she sells 30 kilograms of cocoons for 12,000 Kenyan shillings (US$112).

Njeri also grows mulberry trees for food and livestock fodder. “The silkworms feed on the mulberry, but the overgrown leaves are livestock fodder,” she says. “The young leaves are a good source of vegetables for human consumption.”

KALRO’s deputy director-general, Felister Makini, says the Kenyan project aims to empower rural women and young people, and create jobs. It also seeks to improve food security through associated mulberry production, with its edible fruit as well as leaves. Because the tree is produced locally, the price of these products remains stable, making them a convenient choice for both farmers and customers. 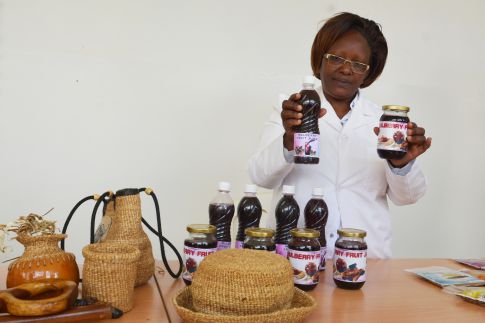 With their sweet, aromatic taste, mulberry fruits are perfect for jams and juices

The tiny silkworm eggs are incubated for 11 days, after which they hatch. One of the packets of eggs released by ICIPE contains approximately 20,000 silkworms, which eat nearly a tonne of mulberry leaves before they spin their silk cocoons. A case of eggs costs 700 Kenyan shillings, or US$6.50, and produces around 35 kilograms of silk cocoons.

Jacinta Mwangi, who rears silkworms at KALRO, says farmers need a clean and well-insulated ‘rearing house’ to enter the business. 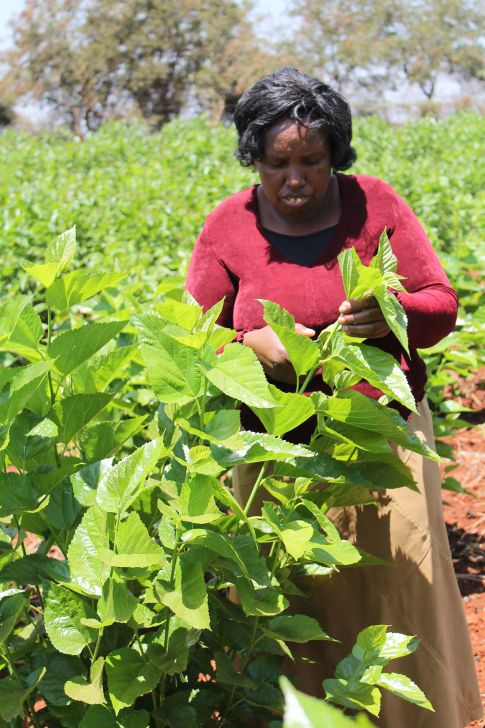 “Forty-thousand silkworms require a 15 by 21 foot rearing house, 75 to 80 per cent relative humidity and 28 degree [Celsius] room temperature during the early stages of their lifecycle, and a humidity of 70 to 75 per cent and 24 degrees Celsius later in life,” she says.

Mature worms are placed in a structure called montage, where they are left to spin their cocoons for eight days, Mwangi says. 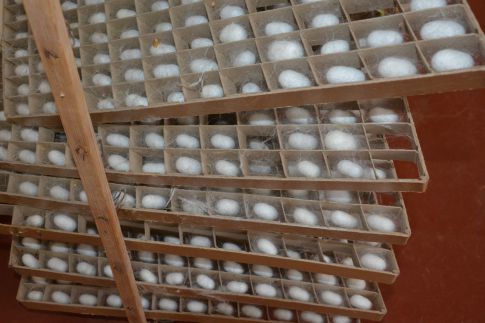 Silkworm cocoons in montages. The silkworms spin their cocoons for about eight days before they are boiled to kill the pupae

Mwangi says soil quality is vital as this produces better leaves, which in turn improves the silk produced. “Mulberry trees are very resilient,” she says. “The leaves left after silkworm rearing are returned back to the soil, which improves soil quality.”

A population of 1,000 plants can sustain up to 40,000 silkworms, which will earn the farmer about 40,000 Kenyan shillings (US$380) a month. Apart from growing mulberry bushes, another major cost is building the rearing house.

Despite the assistance on offer and one kilogram of dried cocoons selling locally for as much as 900 Kenyan shillings (US$8.40), fewer than 50 farmers currently rear silkworms. To start with, farmers must build insulated houses to maintain the constant warm temperatures the silkworms require, and the cost can be prohibitive.

According to KALRO, the national production is less than two tonnes of dried cocoons a year whereas there is potential to produce over 10,000 tonnes. 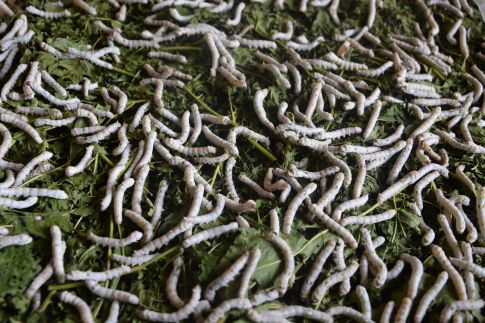 Larvae in their final stage of development, after which they are placed in a montage. They are fed fresh leaves twice a day.

Monica Waiganjo, the minister for agriculture, livestock and fisheries in Kiambu County says some of the major deterrents are an inability to access quality silkworm eggs, a lack of rearing and silk processing skills, and, at times, a dependence on imported eggs that are unsuited to Kenyan conditions. 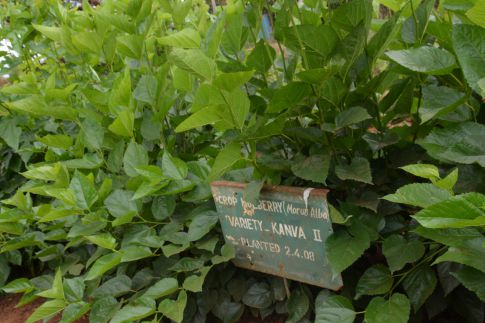 Entomologist Muo Kasina, director of the National Sericulture Research Centre, says local researchers are working with the National Institute of Agrobiological Sciences of Japan and UK firm Oxford Biomaterials to identify silkworm strains and mulberry varieties that thrive in the country. 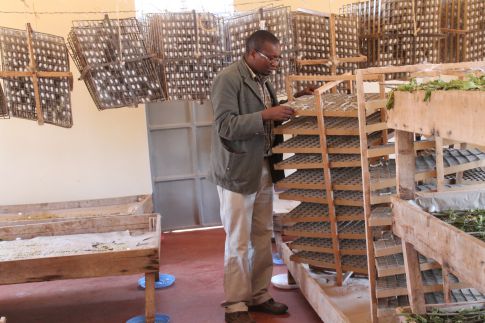 Despite being generally adaptable, mulberry plants are susceptible to viruses carried by mealybugs, whiteflies and aphids. Outbreaks are managed through pruning. Silkworm diseases such as Flacherie, Grasserie and Muscardine are prevented by disinfecting equipment and the rearing house, feeding the insects high-quality mulberry leaves and maintaining the right temperature and humidity. 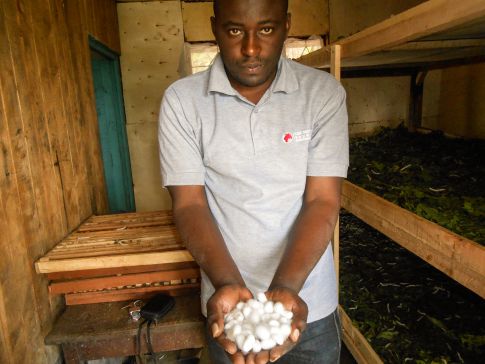 Silk threads are soft, lightweight and highly flexible. Besides being used to make the globally renowned fabric, silk can be found in common objects such as fishing lines, parachutes, insulation coils for telephones and wireless receivers, as well as medical dressings and thread for stitching wounds.