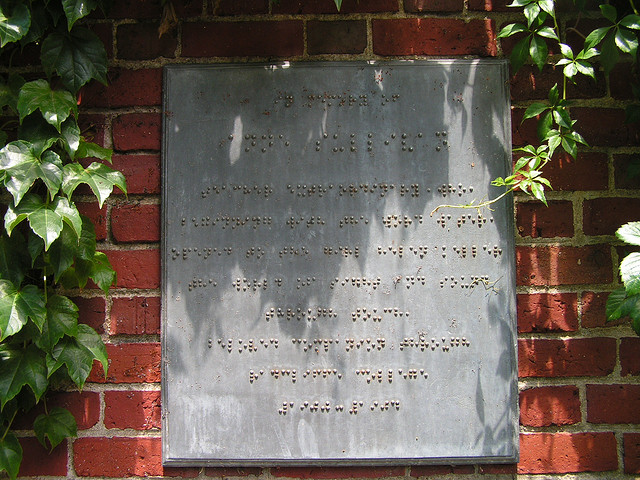 Learning Braille can be a formidable challenge in developing countries. Supriya Kumar profiles a new device that's addressing the task.

Imagine picking a hundred blind people at random from around the world. Chances are that 90 of them would come from developing countries. Of these 90, a large proportion would be living in poverty and only two would be literate.

At less than three per cent, the literacy rate among blind people in developing countries is extremely low, even in comparison with the low general literacy rate, which is 50 per cent in some countries.

Often, parents do not see the value in educating their blind children. Even if they do, children may not receive appropriate attention in traditional schools. Very few teachers are trained to teach Braille, a written language for the blind, in which letters are represented by

a group of raised dots that are felt with fingertips.

So researchers in the United States have developed a Braille 'tutor', which tackles many of the issues faced by new Braille learners in the developing world.

The challenges of Braille

Braille is written using an array of different tools, depending on the available resources. In the developed world, Braille-writers use a six-key typewriter called a Brailler. At US$600 dollars, these fast and easy-to-use devices are too expensive for most in the developing world.

Children in developing countries use a slate and stylus — a writing utensil — to emboss Braille characters onto the back of thick paper. Embossing a mirror image from right to left on the back of the page ensures that what is written can be read from left to right when the page is right side up.

To be able to read and write Braille, children thus need to learn not just each letter in the Braille alphabet, but also its mirror image. Furthermore, feedback on whether they've written the characters correctly is delayed until the page is flipped over. The entire process presents a formidable challenge to young children learning to read and write.

Another challenge for learners arises from the fair amount of strength required to emboss dots onto thick paper using the stylus.

"The Braille slate itself is heavy for the weaker and smaller children. Holding it is another big problem. In addition to this, holding a stylus and putting pressure through it to get the print of the dot is even more difficult."

Nidhi Kalra, of TechBridgeWorld — a venture of the Carnegie Mellon University in Pittsburgh, United States — that aims to develop and implement technology to aid sustainable development around the world, decided to tackle some of these issues.

She asked Tom Lauwers, a fellow student at the Robotics Institute at Carnegie Mellon University, if he knew anyone who might be interested in building hardware that could be used with software she had written.

Lauwers jumped at the opportunity and together they decided to produce a robust, low-cost, low-power, electronic Braille tutor. They wanted it to be something that could be used for a long time, whose parts were available locally and could be replaced using local manpower.

Kalra and Lauwers are developing the first generation tutor in close collaboration with the students and teachers at the Mathru School for the Blind in India. When Kalra took the Braille tutor to Mathru for field tests in the summer of 2006, the response she got was overwhelmingly positive.

Mathru is a residential school with 45 blind students and eight teachers, six of whom are blind themselves. Kalra found that after six weeks of using the Braille tutor, students who previously made frequent mistakes started writing noticeably faster, with almost no mistakes.

"Now the small children and weaker students of Mathru are happily learning Braille as it is easy and also fun learning," says Muktha.

Even students who were fluent in Braille enjoy using the tutor because of the audio feedback. Overall, Kalra found that students and teachers seemed to be writing much more.

Based on feedback from teachers and students at Mathru, Lauwers designed the tutor to feel like the slate the students are used to, by placing a cut-out of a normal plastic Braille slate over the top of two rows of Braille cells in the tutor.

The stylus is also a normal Braille stylus, connected to the tutor by a wire. In addition to two rows of 16 cells each, the tutor also has four buttons that can be programmed so the students can interact with the tutor.

For example, one button mutes the speaker so that advanced users can write without audio feedback; another button allows students to choose between writing right-to-left or left-to-right.

Each alphabet in English Braille is written as a set of six dots in a cell. The tutor feeds back on both the dot sequence and the letter that the sequence encodes, thereby reinforcing the sequence to the beginner.

Further, the tutor provides this audio feedback as soon as the writer touches the stylus to the slate, removing the need for strength that would be required to emboss paper.

The software for the tutor uses a digitised version of a Mathru teacher's voice for audio feedback, as the children — especially the younger ones — had difficulty understanding the American accent normally used in text-to-speech software.

The tutor can be tailored to address the specific needs of the student based on their level of fluency in Braille. The tutor can be adjusted to read out the position of the dots in the cell, the letter and — for students well-versed with the alphabet — just the final word or sentence they have written.

The tutor has also been useful in diagnosing students' problems with Braille. Mangala, a student at Mathru, always completely embossed all six dots of a Braille cell before she started using the Tutor, suggesting that she didn't understand the concept of Braille.

But the tutor showed she understood the concept; her mistake was that she wasn't moving from one cell to the next as she wrote the sequence of letters. So, for instance, she would emboss dots one and three of a cell for the letter 'k', and then, dots one, two, four and five of the same cell for the letter 'n'.

Her teachers, who are also blind, realised that this was the case because the tutor would read aloud the letters she was embossing.

Work is underway to produce the next generation of the tutor, which could be tested later this year.

Kalra found that students at Mathru were often scared of touching the original stylus because of the wire that connects it to the tutor, so in the new version of the tutor, the stylus interacts with the slate wirelessly.

Shivayogi Hiremath, an engineer who has undertaken a pilot project to produce six tutors locally in Bangalore, says that mass production in India will require some adjustments to the electronics design so that locally-available materials can be used.

"All details of hardware and software design will be made open-source. It should, therefore, be fairly easy to adjust the design if need be, in order to produce the tutor in large numbers," says Lauwers.

Hiremath and Anil Biradar, an IBM (International Business Machines Cooperation) employee in India, helped to get a US$1000 donation from IBM for the Mathru School, so they can continue to explore local production of the tutor.

For now, the Mathru School has three tutors, and is expecting to have some more available soon, thanks to the grant from IBM. Mathru also plans to introduce and encourage use of the tutor among potential users outside the school, once there are enough tutors available.

All too often, technology used in developing countries is not designed with the explicit needs of local people in mind. But the Braille tutor appears to be a case of technology from the 'bottom up'. The need for the Braille tutor existed, and Kalra and Lauwers are successfully providing the technology to address that need.

Supriya Kumar is a biologist and a freelance writer from Bombay, India, currently working towards a degree in public health at the University of Pittsburgh in the United States.