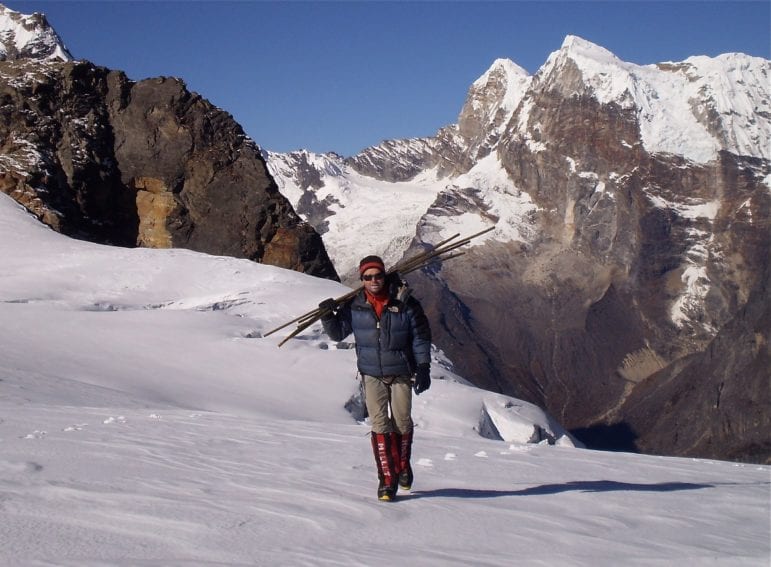 Patrick Wagnon is a glaciologist at the Institute of Research for Development in France, and a visiting scientist at the International Centre for Integrated Mountain Development in Kathmandu, Nepal. As a global ‘glacier chaser’, he has summited some of the highest mountains in the world, including the 8,516 metre Lhotse in the Himalayas.

In 2001, Wagnon and his fellow glaciologist Christian Vincent, of the French National Centre for Scientific Research, launched GLACIOCLIM — a network of glacier observatories across different climate zones from the tropics to the poles. They feature in the documentary, The Himalayas: The Abode of Snows, which premiered in Kathmandu in March.

At the International Glaciological Society’s Symposium on Glaciology in High-Mountain Asia, which was held in Kathmandu last month, SciDev.Net caught up with Wagnon to find out what GLACIOCLIM is about, what it was like to work at the Mera Peak Glacier Observatory at 6,350 metres above sea level — the highest in the world — and how fatal accidents could be reduced in the Himalayas.

Why is this global network of glacier observatories important?

The idea is to study glaciers as a climate indicator, and see how different glaciers under different climate regimes behave on decadal scales. So having long-term measurements of weather conditions and glacier changes, especially in ice mass, is absolutely essential. In GLACIOCLIM, we monitor five benchmark glaciers in the Alps in temperate climate, two in the Andes in tropical climate, two in the Antarctic, and two in the Himalayas (the Chhota Shigri Glacier in India and the Mera Glacier in Nepal).

We installed the same kind of monitoring instruments for every glacier, so we can compare their mass changes and pinpoint the underlying mechanisms. The data, which are available to everybody, could help to improve satellite measurements of glacier changes as well as physically-based models aimed at a better understanding of glacier flow and climate impact. Hopefully, we will be able to better predict how glaciers will respond to climate change — not only in temperature but also precipitation, cloudiness, and solar radiation.

The latest addition to the network is a glacier observatory at 6,350 metres above sea level, at the Mera Peak in Nepal’s Himalayas. What’s the purpose of having an observatory there?

The Mera Peak Glacier Observatory, including the weather station, is important for two reasons. First, most weather stations are down in the valleys and we have little idea how climate is changing at high elevations. With measurements of temperature, humidity, wind speed and direction, solar radiation, and the timing and amount of snowfall, we hope to fill in this knowledge gap.

“Himalayan glaciers are losing mass, though less rapidly than average mountain glaciers in other parts of the world”

Second, most measurements of glacier mass are carried out at so-called ablation zone at relatively low elevations, where you have a net loss in ice mass. The accumulation zone, where glaciers gain mass, is the weakest link in Himalayan glaciology. We know very little about what’s happening there and satellites are not very good at measuring mass gain. There is an urgent need to measure not only how Himalayan glaciers are changing at the accumulation zone — which we’ve been doing on the Mera Glacier for the past eight years — but also the weather conditions that cause those changes.

What is it like to work in the Himalayas?

Both benchmark glaciers in the Himalayas are literally in the middle of nowhere. The only way to get to the Mera Glacier, for instance, is by foot from the nearest Nepali village, Lukla. It’s a week’s hike: first along Himalayans valleys, where the landscape changes from lush forest to an alpine, rocky environment. We normally have our base camp at 5,400 metres above sea level. From there, we work either on the glacier terminus or higher up at the accumulation zone. Twice a year — before and after the monsoon — we measure changes in glacier thickness, the amount of snow in the snow pits, and download weather data. There is normally some maintenance work: the mast may be tilted by winds or buried by snow, or some sensors may be broken down, so we’d fix them while we are there.

What have we learned so far about Himalayan glaciers?

The main message is that Himalayan glaciers are losing mass, though less rapidly than average mountain glaciers in other parts of the world. But they definitely will not disappear by 2035 as predicted by the UN Intergovernmental Panel on Climate Change in its 2007 report.

This, however, is no cause for complacency for two reasons. First, there are big regional variations. In places affected by the Indian monsoon, like the eastern and central Himalayas, glaciers are losing mass as rapidly as glaciers in other parts of the world. In the Karakoram and Pamir, however, where westerly winds dominate, glaciers are stable or have even gained a little bit of mass — possibly because increasing snowfalls are compensating mass loss caused by global warming.

Second, glaciers are not going to last forever if they continue to lose mass, especially with more warming in the future. Even if Himalayan glaciers are resisting climate change now, they will reach a tipping point if the current rate of warming continues. This has important implications for water resources in this densely populated region — though the impact may vary greatly from place to place, depending on elevations and climate regimes. The ultimate solution to prevent glaciers from disappearing is to reduce emissions of greenhouse gases. Meanwhile, we really need to simulate how glaciers and water availability will change in the future.

How does your work benefit local communities?

There are mainly two aspects. One is capacity building — supervising students, training technicians, and improving research standards. I supervised an Indian PhD student who did his thesis on the Chhota Chigri Glacier; he is now a research associate at the National Institute of Hydrology in Roorkee, India, and will continue to monitor glaciers in the Himalayas. I now have a student from Kathmandu University, a Sherpa from the Khumbu region. I also try to find funding to send scientists here to study and do research in France. The idea is not for us to keep coming here but for local scientists to lead the project eventually.

The other aspect is related to the ultimate goal of GLACIOCLIM. That is, to better understand glacier changes, so hydrologists could use models to predict how much glacier melt we can expect at different elevations and when. This is really important for local communities to adapt to climate change, especially people living in upstream basins where glacier melt could constitute as much as 50 per cent of total water resources.

What motivated the documentary, The Himalayas: The Abode of Snows?

The film is the last of a series of four documentaries about GLACIOCLIM — one for each location. The idea is to give the public an understanding of GLACIOCLIM, why it’s important, what it’s like to work in those places, what the main results are, and why it matters to local communities. The films have been shown on French television channels and will have public screening in museums, schools, universities, scientific conferences, and mountaineering festivals.

Last year saw fatal accidents due to icefalls in the Everest and avalanches in the Annapurna region, killing 16 guides and 43 trekkers and local residents, respectively. Were they isolated incidents or did they result from climate change?

It’s very difficult to say if any particular events are due to climate change. Risks have two components: the natural side and the social side. There aren’t any studies about the trend of such incidents in the Himalayas. My feeling is that we may see more such fatal accidents in the future — even without climate change — because more people are exposed to the risks.

There are, for instance more than 500 people attempting to climb the Everest each season — a ten-fold increase compared to 20 years ago. It’s such a commercial enterprise now that anybody with money could go (some people get carried to the summit with oxygen tanks). A lot of those people have no understanding of the dangers. There are ‘traffic jams’ at over 8,000 metres. This is dangerous: if a storm closes in — and they do close in fast in high mountains — there would be no escape.

What could we do to minimise such fatal accidents in the future?

Last October’s avalanches in the Annapurna were caused by a cyclone coming off from the Bay of Bengal. This usually happens in October and November, when you get huge storms, very humid air and a large amount of snow at high elevations. You can see it coming at least three days ahead of time. There needs to be an early warning system — including improving communication networks in remote areas and giving mountain communities better access to weather forecast — to prevent last year’s tragedy from happening again or at least to cut down the number of fatalities.

This article has been produced by SciDev.Net's South Asia desk.