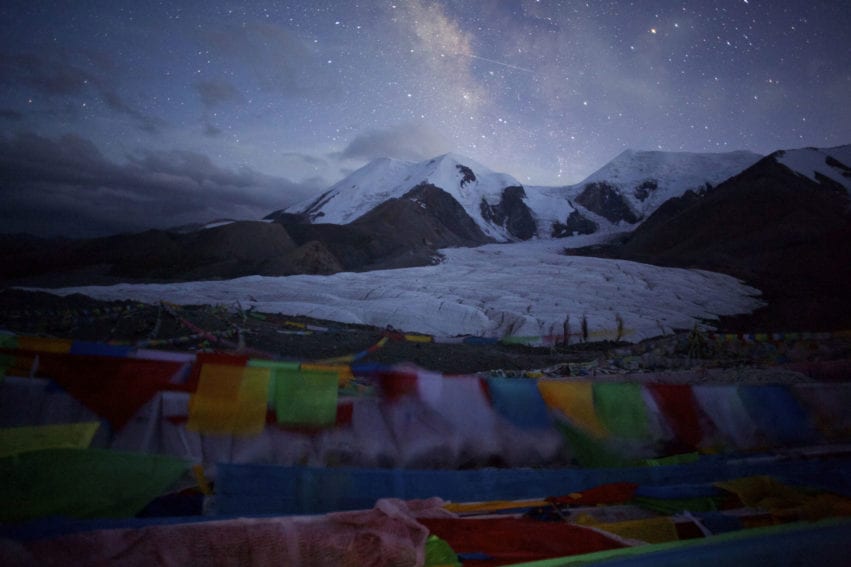 Geologists gathered in Beijing for the 33rd International Geographical Congress, held in August, reported that at least six of Tibet’s southern lakes could be classified as “very critically dangerous” since they could cause devastating glacial lake outburst floods (GLOFs).

There have been at least 30 GLOFs in Tibet in the recent past according to Pradeep Mool, a geologist and remote-sensing expert with the International Centre for Integrated Mountain Development (ICIMOD) in Kathmandu, Nepal.

In 1981, the rocky moraine ridge of Cirenma Co, a glacial lake 14 kilometres from the China-Nepal border, collapsed as a result of an ice avalanche, unleashing nearly 20 million cubic metres of water that picked up debris and blocked the Poiqu River — a transboundary river that originates in Tibet and flows through Nepal and India (known respectively as Bhote Koshi and Sun Koshi). It raised the water level by 30 metres over a 30 kilometre-stretch in Nepal.

In Tibet, the torrent destroyed a village and a highway bridge, though there was no fatality. In Nepal, however, the floods killed five people, damaged infrastructure, including 47 houses, one hydropower station and a key trade route between Nepal and Tibet, causing economic losses worth US$ 4 million.

Now, 35 years on, Cirenma Co is full again, says Hu Jinming, a hydrologist at the Yunnan University in Kunming, China. And Cirenma Co is just one of several rapidly expanding glacial lakes in the Poiqu watershed, according to a study Hu presented at the Beijing conference.

By using satellite imagery, Hu, Mool and their colleagues found that 13, out of the 21 glacier lakes they studied, had increased by 24—162 per cent between 1991 and 2012. “This is consistent with the big picture of glacial-lake changes in the Himalayas, where most glaciers are retreating rapidly,” says Wang Weicai, a glaciologist at the Chinese Academy of Sciences’ Institute of Tibetan Plateau Research in Beijing.

“They [censors] do not provide enough lead time for downstream communities in Nepal to respond if a flood originates in Tibet.”

In a separate study that analysed 119 glacier lakes in the Poiqu watershed, Wang and his colleagues found that their total area had expanded by 122 per cent between 1976 and 2010 — pointing to a trend that began at least four decades ago.

In a rare joint China-Nepal expedition to the region, Hu, Mool and their colleagues surveyed 10 of the expanding lakes, gathering information such as dam composition and the degree of consolidation, whether they are drained from the surface or underneath, the distance between the mother glacier and the drainage point, and valley gradients that could help determine the likelihood of an outburst flood and the impacts.

Based on an area-volume relationship derived from previous studies of glacial lakes in the Himalayas, the researchers estimate that the volume of those 10 lakes — an important factor in risk assessment — averages 92 million cubic metres and can be as high as 430 million cubic metres.

The team, relying on Wang’s study, concluded that six of them are very critically dangerous while two lakes, including Cirenma Co, are considered to be lakes in “very high degree of danger”.

“Both studies point to a really worrisome situation that has serious implications for downstream communities,” says Jeffery Kargel, a glaciologist at the University of Arizona in Tucson, who has been working in Nepal for over a decade but is not involved in the studies.

The Poiqu watershed is home to 17 Tibetan settlements of about 5,000 people, though most of them are not at risk in this sparsely populated part of Tibet. In Nepal, however, approximately 3,000 households with 16,000 people could be affected, says Mool. Risk assessment shows that a GLOF of the same scale of the 1981 incident would cause much greater economic losses, about US$153 million. “This is mainly because there has been significant infrastructure development along the valley in the past decades,” he says.

The lakes that are deemed highly dangerous need to be closely monitored, the researchers say. When necessary, there should be proactive attempts to lower the water levels, says Kargel, who is part of the scientific team that advises the mitigation work.

One such effort is being carried out at Imja Tsho, a glacial lake in Nepal 10 kilometres south of Mount Everest, where the goal is to lower the water level by three metres. “This will at least reduce the magnitude of the disaster should one occur if not eliminating the risk altogether,” says Kargel.

Meanwhile, there is urgent need to install effective early-warning systems in the upstream regions in Tibet, says Hu. Such systems consist of sensors that measure water levels and automatically send warning signals to a management centre when they rise above certain thresholds.

In the aftermath of the 1981 disaster, Nepal installed a series of such censors along the Bhote Koshi and Sun Koshi. “But they do not provide enough lead time for downstream communities in Nepal to respond if a flood originates in Tibet,” says Mool.

To be more effective, early-warning systems need to be located much closer to glacial lakes in Tibet, says Kargel. This requires a strong bilateral cooperation between China and Nepal and the sharing of water-level information. “This is the only way to ensure that disasters such as the 1981 GLOF won’t happen again,” says Mool.

This piece was produced by SciDev.Net’s South Asia desk.