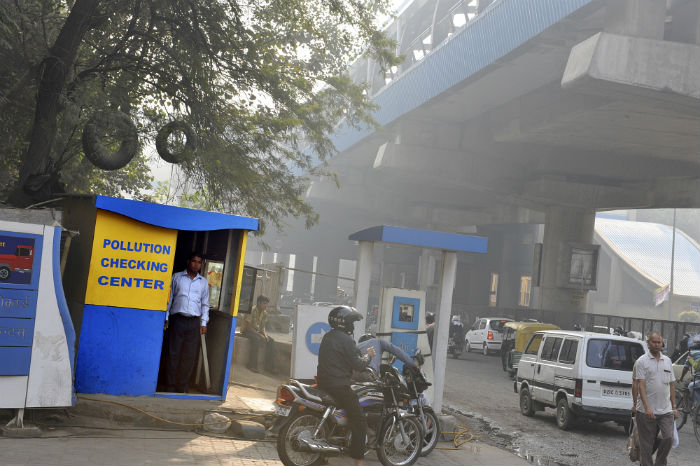 A public health emergency is causing 3.3 million premature deaths a year — more than malaria and HIV combined. But the culprit isn’t a disease pandemic: it’s the toxic air polluting the world’s major cities. In India’s capital Delhi, the situation is so desperate that the authorities recently trialled a scheme in which drivers could only use their cars on alternate days.

But this isn’t just an Indian problem. In 2014, the WHO estimated that half the world’s urban population live where air pollution is more than 2.5 times the recommended limit. [1]

When it releases updated air pollution data for 2,000 global cities next month, it will reveal that a bleak picture has got even worse. The impacts are severe: not only does pollution damage the environment and contribute to climate change, it also increases the incidence of respiratory diseases such as asthma, and causes strokes and heart attacks.

But the onus isn’t just on governments: the private sector must also act to cut emissions. Industrial growth is a major driver of the crisis, particularly in rapidly industrialising countries across the global South. This is where most of the world’s urban population growth is taking place, with young people relocating from villages to cities in search of work.

Multinationals now commonly accept they have an obligation to minimise their environmental damage, by reporting on emissions and taking steps to reduce energy use or green their energy supply.

But these efforts are usually confined to factory operations and office buildings that come under a firm’s direct control. It’s time multinationals went further, and took greater responsibility for their subcontracting — the firms who transport their goods and equipment, for example. Businesses should include estimates of the environmental impact of these activities in company sustainability reports and offer financial incentives to contractors who use clean fuels.

Similarly, companies that transport staff to and from work could provide clean-energy vehicles or, where clean public transit is available, offer incentives to those employees who elect to use it.

Finally, companies could relocate operations from over-polluted urban areas to rural ones where people are in need of employment.

The combination of emissions from expanding factories and the transport pollution generated by population growth has made developing megacities notorious. In Delhi, industrial pollution and transport combine with underlying geography — a landlocked megacity with poor ventilation — to produce lingering smog. [2,3] In Beijing, pollution is driven largely by industrial coal burning, while in Latin American cities such as Mexico City and Santiago, transport is the major culprit. [4]

Since companies congregate in urban areas to take advantage of existing transport and power infrastructure, as well as the availability of skilled labour, relocation would require substantial public investment in rural infrastructure and education of rural workers.

But given that the huge health bill will carry on rising if we continue to fail to act, it’s an investment well worth making — and we urgently need to show companies and governments data that demonstrates just how costly inaction will be.

Maha Rafi Atal is a PhD candidate at the University of Cambridge, United Kingdom, where she is researching the political effects of multinational firms acting as public service providers in the developing world. She was previously a journalist, including at Forbes, where she covered the intersection of business, development and international affairs. You can contact her on mra42@cam.ac.uk or follow her on Twitter: @MahaRafiAtal

[1] Elissa H. Wilker and others Long-term exposure to fine particulate matter, residential proximity to major roads and measures of brain structure (Stroke, April 2015)
[2] S. A. Rizwan and others Air pollution in Delhi: its magnitude and effects on health (Indian Journal of Community Medicine, 2013)
[3] Prashant Kumar and others New directions: Air pollution challenges for developing megacities like Delhi (Atmospheric Environment, December 2015)
[4] Luis A. Cifuentes and others Urban air quality and human health in Latin America and the Caribbean (Economic Commission for Latin America and the Caribbean, October 2005)