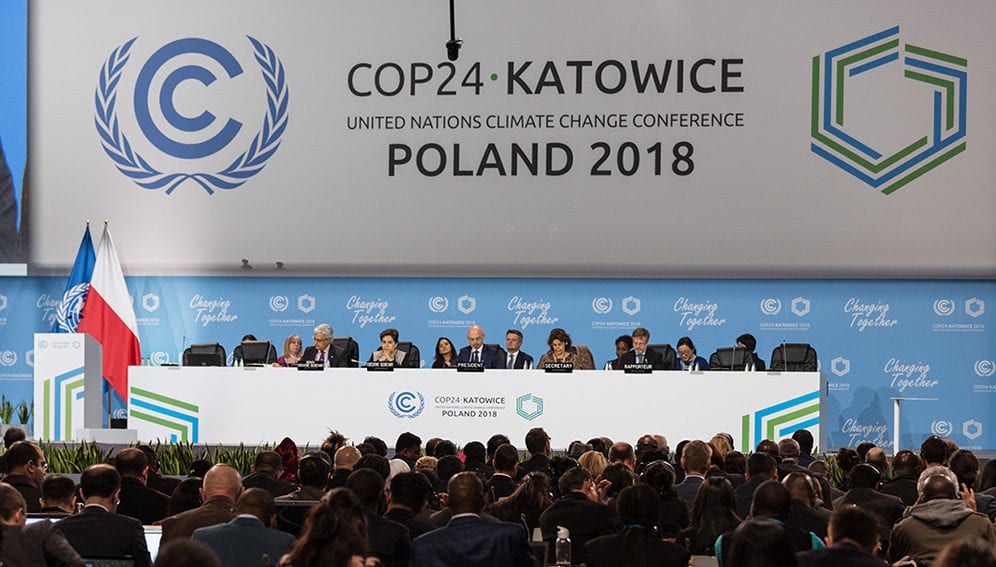 A COP 24 plenary Copyright: UNclimatechange [CC BY-NC-SA 2.0]. This image has been cropped.

The international deal hammered out during last-minute talks at the 24th UN climate change conference (COP 24) has been lambasted for failing to address crucial issues related to reducing emissions in developing countries.
After a tense night of talks in Katowice, a city in coal-fuelled Poland, countries agreed a complex set of rules on 16 December to support the implementation of the Paris agreement. The deal states that all countries will have to describe their domestic attempts to reduce emissions in greater detail than ever before, providing information on their mitigation, adaptation and finance plans.
But the final agreement fails to deliver on action points brought forward by developing countries, including compensation for irreparable damages caused by climate change and financing for adaptation and mitigation technologies.

“The barely adequate outcome in Katowice means there’s much work ahead to ensure countries live up to their responsibilities to put more ambitious action on the table by 2020.”

“The advanced text concluded at COP 24 reflects a considerable progress, especially after facing persistent logjam at previous sessions,” Vaibhav Gupta, senior programme lead for the Council on Energy, Environment and Water in India, told SciDev.Net.
However, Gupta observed that “sticky issues around climate finance and the guiding principles of equity and differentiation have not been adequately settled”. For example, under the agreed financing framework, developed countries have to report on what they do, but what they report is their choice. "I am also disappointed by the exclusion of any capacity improvement plan,” Gupta says, which would help developing countries build the right infrastructure to count, manage and report on their emissions.
The conference was meant to outline ways to limit man-made global warming to 1.5 degrees Celsius above pre-industrial levels — a deal agreed in Paris in 2015. But the agreement falls far short of this, conference attendants warned. The failure to create a system for countries to report and trade on their “mitigation outcomes”, which was asked for in the much-debated Article 6 of the Paris Agreement, has been another missed opportunity this year, attendants said.
“Some interpret this definition in terms of carbon credits, but its architects chose to keep its meaning more general, so countries will be able to exchange a broad range of tokens coming from their mitigation efforts,” says Leonardo Massai, a climate policy expert with the Coalition for Rainforest Nations, who negotiates as part of the Democratic Republic of Congo team.
Following opposition from Brazil, any decision on the final shape of this system has been postponed to next year's talks in Chile. Critics said that this is devastating, as an effective mitigation market is a core feature of the Paris Agreement and would allow countries with lower capacity to act faster by piggy-backing on emission reduction efforts of more advanced countries.
COP 24 also failed to address the issue of loss and damage caused by climate change, a traditional sticking point of the negotiations that many thought could be solved this year by enshrining a robust framework for financial compensation in the rulebook. Ahead of the release of the final deal, Francois Martel, secretary general of the Pacific Island Development Forum, told SciDev.Net that this issue was a red line for small island states.
“For us, it's a reality,” he said. Martel is flying back to his home country Samoa for Christmas when the country is usually hit by cyclones which people can no longer prepare for. “We don't know which island will be hit. Before, cyclones came only from the north, now they come from any direction. We never know.”

If the deal marks one success, it was bridging differences between global powers such as China and the United States. But observers agree that, while some productive compromise has been achieved this year, the most burning issues have just been rolled over to the next meeting.
“The barely adequate outcome in Katowice means there’s much work ahead to ensure countries live up to their responsibilities to put more ambitious action on the table by 2020,” said Rachel Cleetus, climate and energy policy director with the American think tank Union of Concerned Scientists. “Every fraction of a degree [of warming] avoided matters.”